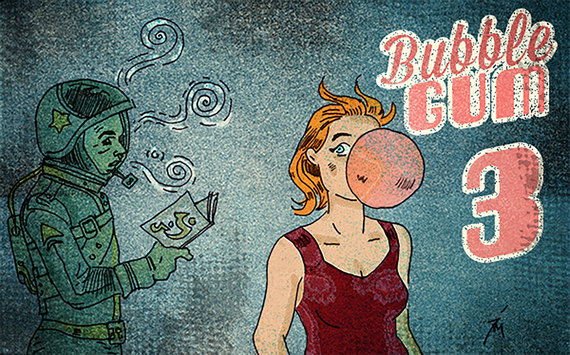 For such a seemingly innocent substance, gum has a lot of enemies. Parochial school teachers have notoriously handed out demerits for chomping on the elastic breath-freshener. And then consider Singapore, where a 25-year-old ban means “therapeutic” gum — prescribed and sold by doctors — is the only option for would-be chewers.

Gum and the war against it have ancient origins. It’s believed that Europeans were chewing birch bark tar 9,000 years ago; Mayans chomped on naturally elastic chicle (a kind of tree sap) to quench thirst and combat hunger. Gum has gotten flack for nearly as long as it’s been around. Aztec conduct rules, for example, permitted only kids and single women to chew gum in public. Married women and widows could chew privately to freshen their breath; men could chew only for teeth-cleaning purposes.

Staunch anti-gum policies, new and old, are a bit hard to swallow. Wads of hardened, ABC gum may be unsavory, but smacking Bubblicious hardly disrupts class or impedes learning. In fact, a Bazooka-for-all policy may have the opposite effect. Scientists have studied the cognitive and emotional impact of gum since the early 20th century.

While we don’t yet understand the brain mechanism underlying gum’s purported cognitive benefits, research suggests that chewing the flavor-blasted rubber can help us stay awake and focused.

The psychologist Leta Hollingsworth scientifically linked gum-chewing and cognitive performance for the first time in 1939, offering evidence that the habit promoted relaxation and improved such cognitive tasks as number-checking and typing.

Today, researchers have a better grasp on the neural process underlying oral movements, as well as fancier brain-recording tools. But their understanding of gum-chewing’s impact on mental processes hasn’t progressed proportionally. Plenty of studies (20 at least count) support Hollingsworth’s basic theory: There’s a connection between a busy jaw and an awake mind.

Individual studies may make stronger claims about gum as a cognitive cure-all, but the overall research paints a more modest picture.

The cognitive process most consistently linked to gum-chewing is alertness. A seminal 1999 study showed that chewing gum helped subjects combat the exhaustion caused by sleep deprivation. In other pro-gum studies, scientists have claimed enhanced cognitive processes, including focus and productivity.

The strongest cases for gum’s cognitive benefits come from behavioral studies in which chewing and non-chewing participants rate their moods, alertness levels and cognitive performance. Of course, these sorts of results are subjective. One unwieldy study, published this past April in Biomedical Research International, consisted of four different gum-chewing experiments, conducted in both a controlled lab setting and a natural environment — in this case, the workplace.

In the lab-controlled experiments, some of the study participants chewed gum (flavored and unflavored, with replacement pieces and without) while hanging out and also while trying to play computer games that tested cognitive skills. In the natural environment experiments, worker-bees holding down typical jobs (teaching, marketing, dentistry) went about their days, either chewing a full, 10-piece packet of gum or abstaining entirely from chewing.

But again, it’s worth noting that this is self-reported data. It’s not a simple matter to quantify a subject’s sense of well-being and comfort. That’s not to say these results aren’t persuasive. In psychology, analysis of people’s accounts of their inner thoughts and feelings is the name of the game.

“In my opinion,” study author Andrew Allen told Van Winkle’s, “the clearest message coming from this field as a whole is that chewing gum is associated with increased subjective alertness, which in turn can aid sustained attention, particularly under conditions where someone is fatigued.”

It’s trendy — and arguably valuable — to back-up subjective results with objective measures. In one experiment in the above study, researchers compared participants’ performance on computer games (testing cognitive skills) when they were and weren’t chewing gum. In a different experiment in the same study, researchers measured participants’ heart rates and levels of the stress hormone cortisol (an indirect measure of anxiety).

The results were murky. Gum-chewing had neither a consistent nor significant impact on game scores or physiological processes.

No Favors From the Flavor

Neuroimaging tools offer more ways to corroborate subjective claims about gum. Researchers can use EEG (electroencephalography) to record electrical activity in the brain and fMRI (Functional Magnetic Resonance Imaging) to capture images of activity in different regions of the brain.

Over the last 15 years, several research teams have used EEG and fMRI to see if chewing gum corresponds to neural changes that say anything meaningful about cognition. Overall, the results have been mixed.

In the first fMRI gum study, published in 2003, researchers found a relationship between chewing gum and improvements in several types of memory, although no improvement in attention. But another group saw incompatible results: better sustained attention, no memory improvement and a negative impact on alertness.

So we have a compendium of studies in which people consistently say they feel certain ways when they chew gum. We still haven’t answered a central question: What’s so special about chewing gum?

In terms of cognitive benefits, a number of studies suggest the flavor of gum doesn’t matter. In fact, people report the same boosts in alertness and focus from chewing pieces of unflavored rubber. It’s also unclear how, or if, an individual’s chewing style affects cognitive performance, based on results from the computer-game experiment in the study above.

It follows, then, that any mental perks have something to do with the physical act of chewing. We may chew on food every day, but gum is an edible substance that can withstand hours of rhythmic mastication. In this way, what’s distinct about the act of smacking gum isn’t how we chew it, but how long we chew it.

“Frankly I'm not sure we really know yet exactly why chewing gum increases alertness and attention,” said Allen, co-author of the four-experiment study.

“There is evidence that chewing gum increases heart rate, which you would associate with greater alertness, but how? People are trying to tease apart factors such as the motor activity — by having people make chewing movements with nothing in their mouth — and flavor — by having people suck-not-chew a sweet. But we've yet to find the definitive answer.”

As science tries to decode gum’s many mysteries, millions of us will continue to enjoy our habit (or vice, depending on your viewpoint). The next time a nun — or Singapore cop — scolds you for blowing a Big League Chew bubble, explain that you’re trying to improve your cognition. We may not have the definitive science to back up your claim, but just give scientists a few more years to chew over the data.