'Don't force me! Such a thing should not be done in Israel! Don't do this wicked thing.' But he refused to listen to her, and since he was stronger than she, he raped her. Her brother Absalom said to her, 'Has that Amnon, your brother, been with you? Be quiet for now, my sister; he is your brother. Don't take this thing to heart.' And Tamar lived in her brother Absalom's house, a desolate woman. When King David heard all this, he was furious. And Absalom never said a word to Amnon, either good or bad; he hated Amnon because he had disgraced his sister Tamar.

Too often in the biblical witness, violence against women and girls focuses disproportionate energy on the feelings and actions of men. King David is furious. Absalom feels hatred. And the desolate Tamar is instructed to be quiet. Her rapist was, after all, her kinfolk, her half-brother, a member of her tribe. In instances when the Bible addresses harmed women and girls, the story is far from pretty. Tamar is silenced. Queen Esther is commended. Hagar is sent away. "Be quiet for now," Absalom instructs his sister. "Be quiet," is too often the message now as it was then. It has been two years since 276 Nigerian girls were forcibly taken from their school. We cannot be quiet.

Anywhere I've traveled in the world where people are experiencing great suffering, the question from caring people has always been, "What can we do to help?" and the reply from those who suffer has been, "Don't forget us." This was my experience in Tijuana where the maquiladoras exploited and abused Mexican factory workers. It was my experience in Soweto where South African men lived apart from their families, in shantytowns, in order to send a few dollars home. It is true in Chibok, Nigeria where parents with daughters, a scant ten years older than my own sweet girl, beg the world to #BringBackOurGirls. Sadly, we in the United States have a hard time remembering hard news. We are much better at forgetting.

On April 14, 2014, Islamist, militant group, Boko Haram, kidnapped 276 girls from their school in the north-eastern Nigerian village of Chibok. 276 children were rounded up and carted away - some were married off to grown men. To be clear, the students were treated this way because they were females daring to get an education. Most of the girls were Christian and forced to convert to Islam. While some of the captives escaped, 219 girls still remain separated from their mothers and fathers two years later. It has been 730 days.

I cannot imagine the pain, but we all need to imagine the pain. What might it be like to experience the enormous loss of the girls in our lives? My home would be stiflingly silent without my daughter. There would be so many gaping holes, yawning hungrily for her body, her laughter, and her spirit. As I write this at our dining room table, I force myself to imagine 730 days and immediately start crying. That would mean two birthdays, two Christmases, her favorite holiday, and two first days of school that would make me crazy with grief. We would no longer buy the Haagen Dazs milk chocolate and almond covered vanilla bars she loves. I'd have to figure out something to do with all her dolls and all those pink dresses. I wouldn't have the pleasure of bathing her and doing her hair while eating our favorite popcorn. Saturday mornings at the playground followed by long Saturday afternoon naps - gone.

Writing at our dining room table, I see the pink Easter basket my daughter has repurposed to hold her many coins. As I stare off in space, waiting for the next sentence to come, my eyes light upon the single daffodil she rescued from last Thursday's rain. It was covered in mud but became perfect and beautiful once she rinsed it in the bathroom sink. As I sigh and fall back in my chair, already emotional from imagining a world without my daughter, I see her beautiful, dirty socks in a pile on the floor. I make a mental note to never complain about her dirty socks again. Dirty socks confirm that my daughter is in the next room, safe and sleeping, but 219 other mama's and papa's daughters are not safe and not sleeping in their rooms. As people of faith, we cannot imagine the pain of losing our girls without doing something about the Chibok girls. John Calvin said it best, in my opinion. A proper response to God's grace towards us is gratitude. My gratitude has legs - it writes and prays and attends vigils. What will your gratitude do? This year, my gratitude also imagines life without my daughter and remembers 219 schoolgirls. It breaks my heart to imagine their 730 days of captivity, and I believe it breaks the heart of the God who created them. We cannot be quiet.

And what of the intersection of faith and kidnapped schoolgirls? What of the intersection of holy texts and men who visit harm on women and girls? As a Protestant minister raised in the Roman Catholic Church, I have experienced faithful folks from many traditions seeking answers to their pain in the holy books that they love. Christian believers look to the Bible for help with pain, but on the question of sexual violence and harm, I don't believe the Bible has much to say that is useful. Creative re-interpretations of the text aside, the biblical witness normalizes violence against women and girls in ways that could destroy faith in a loving God. The church is complicit in this violence. In its failure to preach and teach against violence and abuse, the church fails women and girls. In its failure to complicate the ways we name and image God, the church fails women and girls. In its failure to treat women as full members of the body of Christ, authorized to serve anywhere their gifts will take them, the church fails women and girls and boys and men. All the people of God need spiritual leaders that say God loves and values all the people. If God loves and values all the people, so should God's people. The minute the church sets men apart for higher office simply because they are men, the church declares war on women and girls. Good people of faith ignore our misogynistic tradition at their own peril. Our holy texts set the stage for ways of thinking and being in the world that are death dealing. Because the texts say, directly and indirectly, that God is male and males are sovereign...kidnapping and selling schoolgirls can grow out of the book that we love. The church cannot be quiet.

Absalom never said a word about his sister, Tamar. Two years later, however, he had their brother killed. I imagine silence killed Tamar long before a sword killed Amnon. Our silence kills too. On this second anniversary of the Chibok girl's kidnapping, what will you say? What will you post on Facebook? How will you remember them on Twitter? If you have a public platform, when will you speak about it? If you pastor a church, when will you preach about it? If you think you have done enough, I invite you to get curious about doing more.

It is early morning as I put the finishing touches on this piece. My daughter is awake and finds her way onto my lap, as she does most mornings. She is warm like a biscuit, fresh from the oven. I have to pause and hug her and cover her face in kisses while offering a prayer for the Chibok girls and their parents. I hold back tears when my daughter asks me, "What are you writing?" and "Who are the Chibok girls?" With tears in my eyes, I give an age appropriate answer. She puts her arms around my neck and lays her cheek next to mine. She says, "Chin up. Don't fail," and gives me a hug. I don't know where her words came from, but they give me the power I need to finish writing.

Today, I shared the Chibok girl's with my little girl. I will preach again on violence towards women and girls because I must not be quiet. Through my tears, I read this article to my husband and am surprised by his emotion. What I am doing is not special. They are simply conversations with people I love - conversations you can have with your loved ones. Thank you for not forgetting our girls. Thank you for not being quiet. 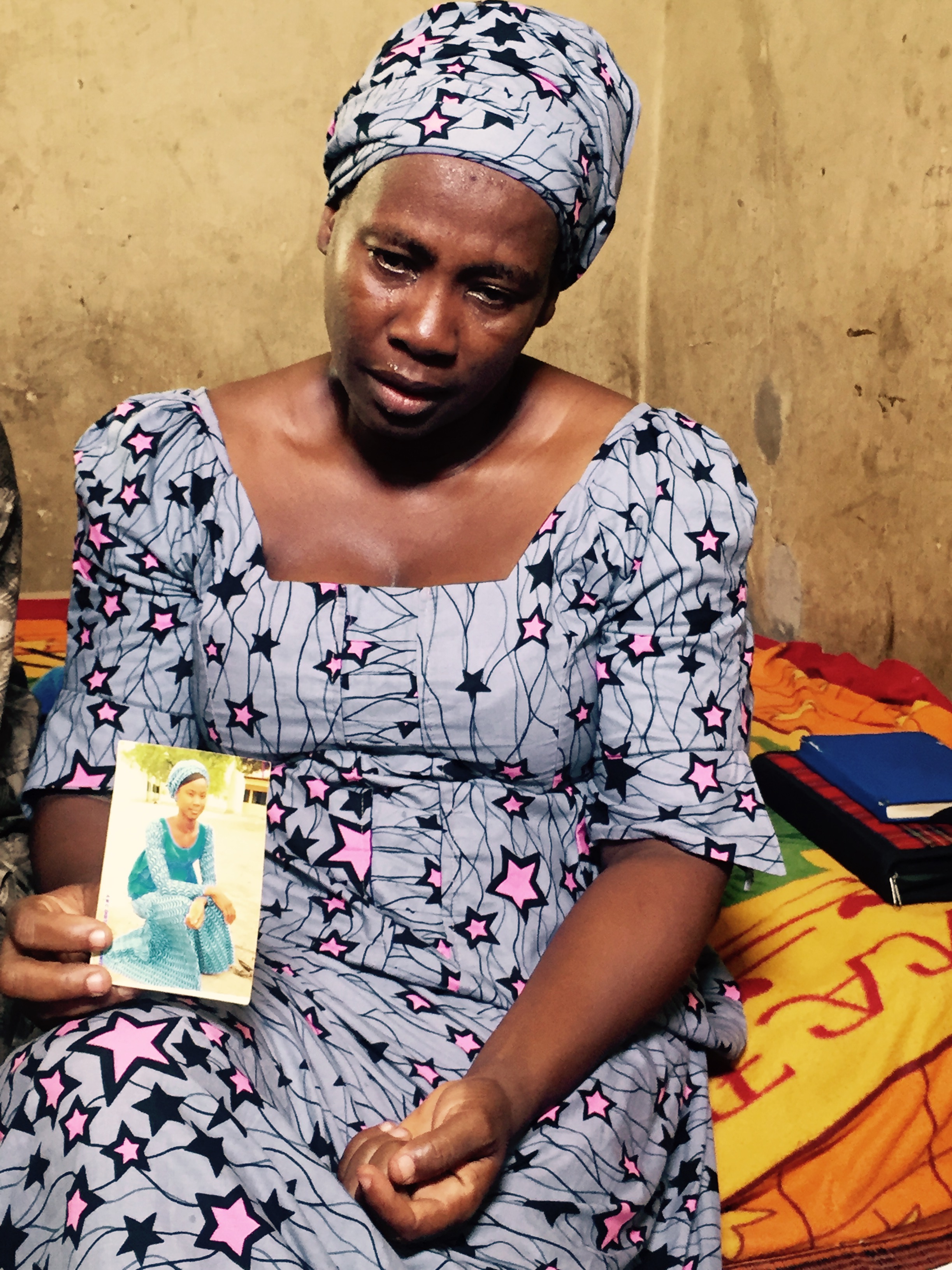 1. Consider the interlocking issues of race, gender, and class. How do you imagine these issues affect the reality that these particular girls are missing two years after their abduction?

3. Mother Theresa said, "We can do no great thing, only small things with great love." What small thing will you say or do, individually or collectively, to #BringBackOurGirls?

1. She Who Is by Elizabeth Johnson. Johnson reviews the history of Christian language about God and explains the need for feminist language about God, thereby providing background for non-theologians. She then develops an inclusive and creative Christian spiritual doctrine. Highly recommended for all collections serving educated lay readers, theologians, and clergy.

2. We Should All Be Feminists by Chimamanda Ngozi Adichie. Adichie offers readers a unique definition of feminism for the twenty-first century, one rooted in inclusion and awareness. Drawing extensively on her own experiences and her deep understanding of the often masked realities of sexual politics, here is one remarkable author's exploration of what it means to be a woman now.

3. Those Are MY Private Parts by Diane Hansen. Hansen shares this primary message: "America, please teach our young children about their sexuality before the child molester does." In just 12 pages of rhyme, the book gives parents a great starting point for having important, candid discussions with their children about recognizing and preventing sexual abuse. Now available in Spanish, "Esas Son Mis Partes Privadas!"