As soon as the Chicago press started getting worked up last week about a high school student who may or may not have slipped some gang symbols into his winning city sticker design, I telephoned San Francisco.

I wanted to talk to my old buddy Marc Paschke, who's been living out there for years.

Marc and I were law school classmates, and his dad, the late Ed Paschke, was a legendary Chicago painter (and one of the coolest guys I've had the pleasure to know).

I called Marc because I wanted to talk about his dad's cow -- the one that city officials yanked off the street back in 1999, during Chicago's "Cows on Parade" exhibition. The city had invited Ed to design a cow, which was then supposed to be displayed throughout the summer, but the city quickly deep-sixed his creation ("Vaca Victoria") because Ed had covered his animal with gang signs, including the same heart and pitchfork at issue during last week's sticker controversy. 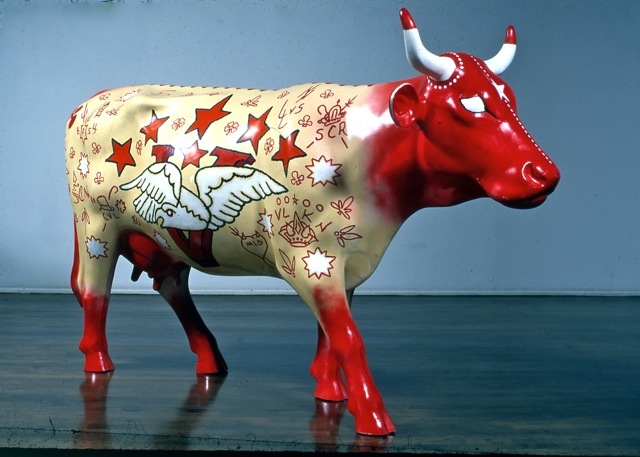 I'm not sure what city officials were expecting Ed to paint when they invited him to join their bovine "parade," but anyone who knew anything about Ed's work should have known, at least generally, what to expect. After all, as Ed's friend and fellow Chicago painter Tony Fitzpatrick said, "[Ed was the] one who saw in life what the rest of us would rather not notice: pimp culture, trans-gender apparitions, and insectile whores -- visions from the other side of the billboards."

Ed himself said that "[l]ife is very much about rule-breaking, about confrontation," and he was always excited by "[t]hings that were charged with a confrontational attitude..."

When a European reporter asked Bob Dylan, back in 1966, to explain the meaning behind some of his songs, Dylan offered this "insight" into his recently released "Rainy Day Women #12 & 35":

Rainy Day Women happens to deal with a minority of cripples and orientals and, you know, and the world in which they live, you realise, you know, you understand, you know. It's a sort of North Mexican kind of thing, uh, very protesty. Very very protesty. One of the protestiest of all things I ever protested against in my protest years.

Ed was too nice a guy to play such games with reporters, but he wasn't entirely forthcoming when it came to his cow. When asked at the time about why he used gang symbols on his fiberglass heifer, he said that his cow was "a celebration of the Bulls victory and street life in Chicago."

Ed was certainly a huge Bulls fan -- I had the pleasure of watching some Jordan-era Bulls games with him and Marc at the Chicago Stadium and in the Paschke living room -- and a great deal of Ed's art, including the cow, "celebrated" street life.

But he didn't quite come clean with that reporter who asked him about the cow.

Gabriel González, Ed's longtime assistant, set the record straight when I talked to him last week. Ed "obviously celebrated outsiders and celebrated the disenfranchised," González said, but Ed covered this animal with gang symbols "because he wanted to entice people to attack the cow."

González told me that Ed knew his cow "would generate heat, but he didn't know how fast that would happen."

Mike Lash, who was Chicago's public art director at the time, told me the political heat came almost immediately. Ed's cow was moved off the street and into a secure display area within a day or two. After that, it was quickly moved again to the Maya Polsky Gallery. The cow was eventually sold to a collector, and the proceeds went to charity.

Perhaps he'll take some comfort in the fact that he wasn't the first local "rock star" to have public officials take issue with a city-sponsored display of his art.

Who knows? Maybe he'll even become a fan of Ed Paschke (pictured below with Metallica's Kirk Hammett in front of another one of Ed's "confrontational" works of art). 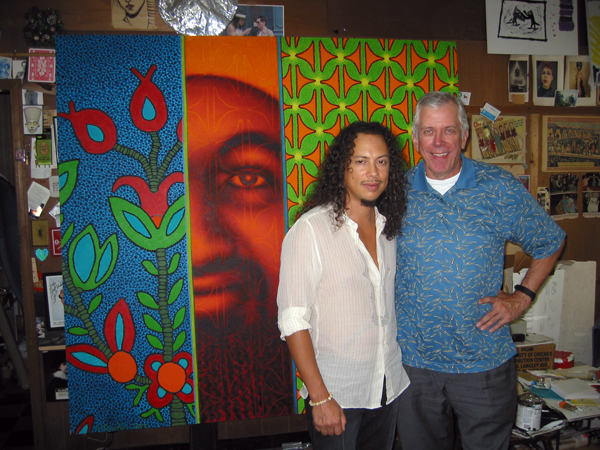