In a project called the Urban Type Experiment, a Chicago art director is redesigning homeless people’s signs help raise awareness about homelessness as a larger issue.

The art director, who chooses to remain anonymous, has been working on the Urban Type Experiment for about eight weeks. He is keeping track of each person he helps, and their responses, on his Tumblr.

“I've left my name off the site because I don't want the project to become about me,” he told The Huffington Post in an email.

Each week, he introduces himself to a different person he sees on the streets of Chicago holding a cardboard sign. “I'll approach them and ask if I can talk with them,” he told HuffPost. “Usually they're a little unsure at first, but once I explain the project and show them some examples, they're more than willing to help out with the project.” 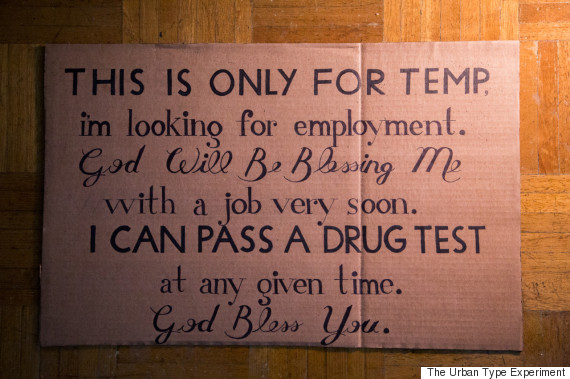 Once he gets permission, the art director spends about a week illustrating the sign’s original message in a bold, eye-catching design. He delivers the sign, and then checks back in a week later to see if his efforts have helped. For now, the response is small, but recipients of the signs have introduced the art director to other people who could benefit from his work. His hope is that the redesign will help individuals’ causes as well as provoke a larger discussion about homelessness.

The project began when the art director was enrolled in an expressive type class, where developed an interest for hand-lettering. Walking home after class each day, he passed multiple people on the streets holding signs and was inspired to use his skillset for a greater good.

“I feel like the signs are doing a really good job of grabbing people's attention and initiating more interactions,” he told HuffPost. “[They] give people passing by something to talk about. It's a conversation starter.”