Snow days are great and all, but for people looking to get back to school, work or just out of their house after a massive snowstorm--it can be a serious hassle.

Digging out a car might be good exercise, but the freezing temperatures make it a less-than-pleasant experience. After all of your hard work, there is nothing more frustrating than returning from the grocery store to see someone else in YOUR spot (or, the city's spot that you happened to have parked in). This is where dibs come in.

For years, Chicagoans have been putting chairs, boxes or whatever they have lying around in the street to "save" their spot following a snowstorm. We discussed "dibs" earlier in the season with Kevin Lynch, founder of Chair-Free Chicago. Chair-Free Chicago allows Chicagoans to order or print well-designed signs to hang on their block, declaring the area a chair-free zone. When we covered the project in December, it started quite a war in the comments section.

A friend recently said, "Talking about dibs is like talking about abortion or religion over dinner with family--you just don't do it."

She may be right, but after the third biggest blizzard in Chicago's history, it's hard not to.

Earlier this week, mayoral candidates weighed in on dibs. Most of them supported the spot-saving practice, and today, the city agreed.

"At this moment, that's a thing they're doing and they're trying to save what they dug out and we're not going to take a position on that," Streets and Sanitation Commissioner Thomas Byrne said Friday morning, according to the Tribune. He also said the city would not be throwing away spot-savers, at least for now.

While dibs supporters placed their boxes and chairs in the street, Lynch and other Chair-Free Chicago supporters headed for "the heart of dibs country"--Bridgeport.

"[We want to] encourage people to be good neighbors and help one another out if they can, rather than fighting over public property," Chair-Free Chicago's Katrina Cabrera told HuffPost Chicago via email. Cabrera, Lynch and other anti-dibs Chicagoans shoveled out cars in Bridgeport from 1 to 3 p.m., hoping to "promote and share the friendly spirit of the community movement."

Will their work stop dibs in Bridgeport? That remains to be seen. For now, send us your dibs pictures, and let us know what you think about the spot-saving tradition. 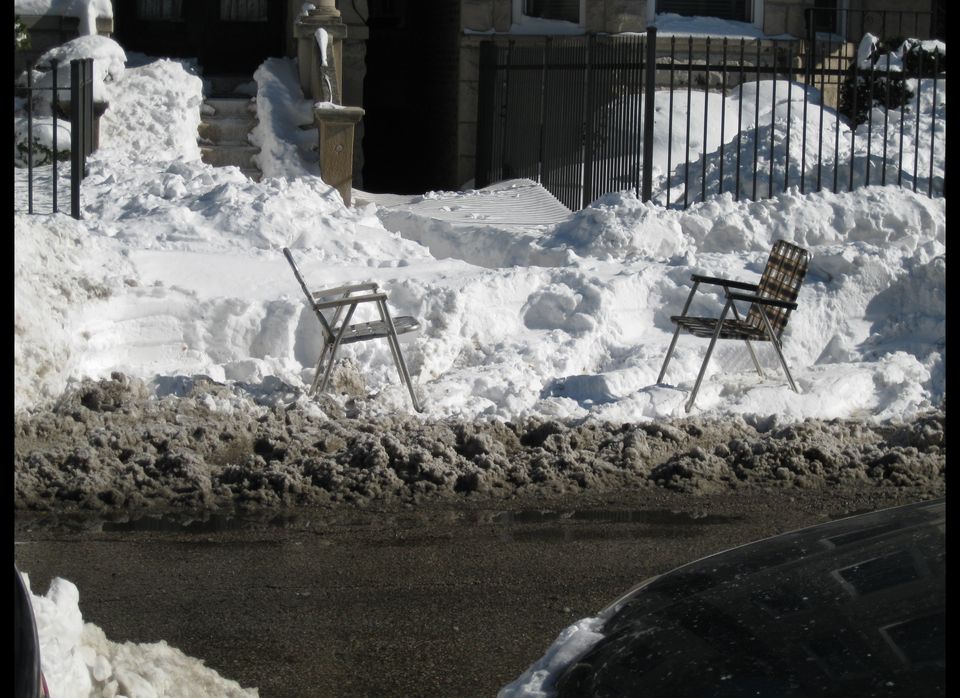