A Roman Catholic church on Chicago's North Side has reached out to its parishioners hoping they will help pressure the city into rescheduling or rerouting the Gay Pride Parade, which is slated to follow a new path directly past its doors next summer.

Our Lady of Mount Carmel Church, one of the city's oldest Roman Catholic churches, reached out to its parishioners concerning the matter Thursday on its Facebook page. The church claims that the parade's new route and scheduled start time (10 a.m.) will force it to cancel morning masses due to the enormous crowds the parade typically attracts. Last year, an estimated 700,000 people attended the parade, according to an AP report.

The church, located between Halsted and Broadway on Belmont, is urging its parishioners to contact Ald. Tom Tunney (44th) to "let your voice be heard."

"Your help is needed," the church's Facebook status reads. "As many of you know, the Annual Pride Parade which is held on the last Sunday of June has had a route and time change. Unfortunately, the parade will now pass in front of church."

The church's pastor, Thomas Srenn, told Fox Chicago his church has already collected almost 1,000 signatures on a petition they plan to submit to the city requesting that the parade route be reconsidered.

Rich Pfeiffer, who has organized the annual parade for the past 40 years, told ABC Chicago he was surprised by the church's complaint but added they should have nothing to worry about. They can still access their facility through an entrance two blocks away, on North Broadway, he notes. Further, Pfeiffer contends other churches located along the parade's previous route never complained about the crowds.

Meanwhile, Tunney, the city's first openly gay alderman and, incidentally, a Our Lady of Mount Carmel Church member, issued a statement, as reported by Fox: "As alderman, my first concern for my ward is public safety. It became clear to the organizers and the city that the current pride parade route was unsafe to 44th Ward residents and spectators alike and there needed to be a substantive change."

In October, Pride Parade organizers announced they would add five blocks to the parade's route, reduce the number of entries and schedule it two hours earlier -- stepping off at 10 a.m. -- in an attempt to curb the public drinking, overcrowding and other safety hazards that were widely reported at this year's event.

Check out photos from the 2011 Pride Parade here. All photos are by Ryan Lee Williams. For more, go here. 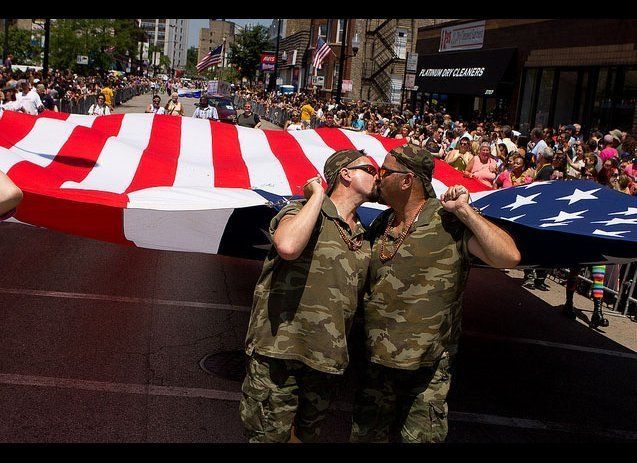