I was at a forum "What's In The Water in Illinois? Reform Symposium on Illinois Government" on Thursday and Friday at the Union League Club. The event was sponsored by the Paul Simon Public Policy Institute at Southern Illinois University. The Institute was described as the late Illinois Senator's "living legacy."

It was a tale of woe and defeat. The stories and statistics were horrifying reminders of the broken politics of Illinois that has defeated progressive efforts for reform, social justice and equity for decades, while showering the wealthy insiders with billions of public dollars. They play and we pay.

No one wore a Freddy or Jason mask -- but it was Halloween come early, but with all tricks and no treats.

Some of the papers delivered were, "Chicago and Illinois: Leading the Pack in Corruption," "The History of Corruption in Illinois," and, "The Illinois Culture of Corruption and Comparison with Texas." It was a tale of venality and unchecked greed. Illinois and Chicago are two of the most corrupt jurisdictions in the nation. Since 1976 some 1,828 public officials have been convicted of crimes in Illinois -- 1,531 were from the Chicago metro region! We are number one in convicted public officials in America! Professor Simpson called The Illinois Governor's Mansion and Chicago's City Hall two of the most dangerous crime scenes in the state.

Our efforts at campaign contribution reform are weak and our tradition of nepotism, jailed officials and conflicts of interest is strong. The assembled scholars seemed to shoot down or discount every popular effort at electoral reform I'm aware of -- including public financing of elections, term limits, limiting the amounts of campaign contributions and amending the U.S. Constitution to prevent corporate domination of elections. One particularly annoying session was about character and seemed aimed at a high school audience and suggested that we all should live up to a bullet point list of noble and common sense character traits, such as Trustworthiness, Respect and Honesty. Well, great -- maybe if we send all our representatives that list they would wake up and live right.

At the end of the sessions I was left wondering what we poor, snookered citizens are supposed to do. I made a suggestion. I urged all the civic groups and leaders assembled there to compile a short list of Illinois election-related reforms that would open up the system and then band together to train and support good government candidates in 2014. I made this observation, "A mentor of mine told me once that politicians have reptilian brains and operate on this calculus -- Can you help me or hurt me? If we can do neither, then we are invisible to politicians." I said that unless we organize for power, we would be doomed to see each grow old at events like these.

Here's one particular striking piece of data from one of the many papers (you can get them all here) on the effect of Illinois' new campaign limits law on the 2011 Mayoral race. Bottom line answer = Not much. 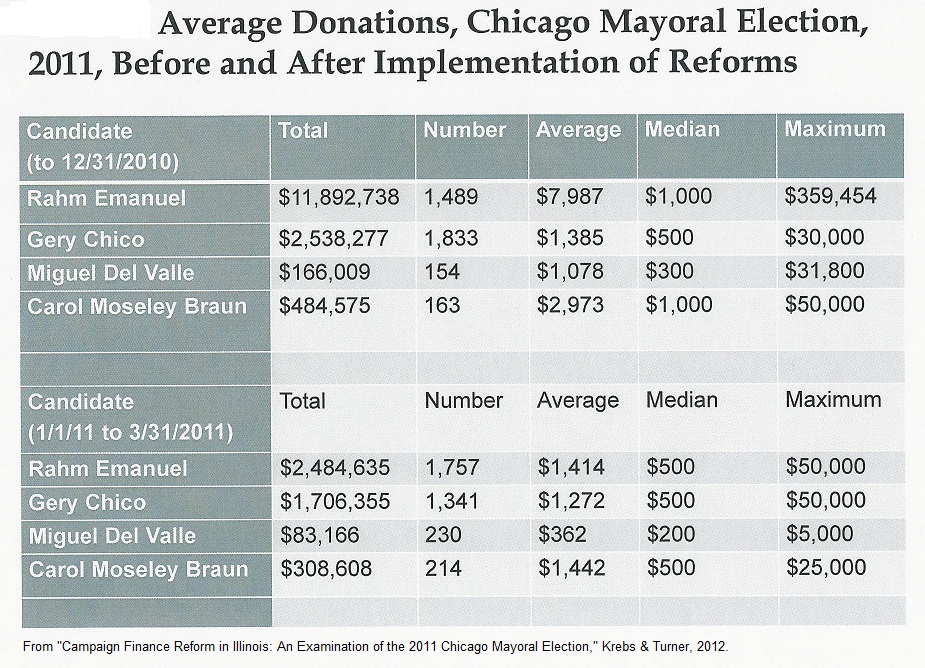