Heavy rains in the Chicago area have made for a major headache Thursday, prompting Gov. Pat Quinn to declare a state of emergency in Cook County.

Gov. Quinn made the declaration early Thursday afternoon, according to the Chicago Tribune, after flooding became particularly bad in Chicago's western suburbs.

Overnight rain totals approaching 5 inches forced a number of closures of expressways and other streets and a myriad of other issues in the area Thursday. (Updates on roadway conditions.)

Amid rising flood-stage levels of both the Des Plaines and Fox rivers, residents in some suburbs are being forced to evacuate their homes. In Lisle, the American Red Cross has opened up shelters after evacuations began taking place. In River Forest, a nursing home was evacuated Thursday afternoon.

(Have photos of the flooding in Chicagoland? Submit them below!)

In the city, the Metropolitan Water Reclamation District of Chicago is urging residents to conserve water by taking shorter showers and going easy on laundry and dishwashing to help ebb the flow reaching the Chicago River, DNAinfo Chicago reports. Earlier Thursday, the city re-reversed the flow of the river out to Lake Michigan in an attempt to avoid flooding at the river's northern branch.

About 24,000 ComEd customers in the Chicago area have lost power due to the flooding, according to Fox Chicago. The Brookfield Zoo has also closed for only the third time in its history -- and will remain closed on Friday.

In south suburban Dolton Thursday afternoon, 10 students were rescued by rafts after their school bus got stuck on a flooded street.

On Chicago's South Side, a sinkhole swallowed up three cars and hospitalized one person earlier Thursday, while many streets and viaducts are under water. A number of CTA buses were rerouted due to flooding. (Follow the latest CTA alerts on reroutes on Twitter.)

Flooding also caused delays on Metra trains and the cancelation of at least 400 flights at Chicago's O'Hare international Airport, ABC Chicago reports. Flights are delayed at both O'Hare and Midway, where 10 additional flights were canceled as of Thursday morning.

Below is a tweeted photo of flooding at the Belmont underpass in suburban Downers Grove earlier Thursday:

WATCH a sewage "geyser" at the Ravenswood Metra stop in Chicago Thursday afternoon:

A photo of flooding in Oswego Thursday morning:

Where's the real-time #flood map app? This is on Douglas Road in Oswego. #CSTstorm pic.twitter.com/DXm5QbuVku

In the suburbs, many schools, government buildings and roads alike all closed due to the storm, the Daily Herald reports. (More school closing information here.)

The rain, as of mid-Thursday morning, was continuing to fall and continued to do so into the afternoon. At least another inch of rain was expected to fall, according to a National Weather Service meteorologist, and the area remains under a flash flood warning and a number of river flood warnings. 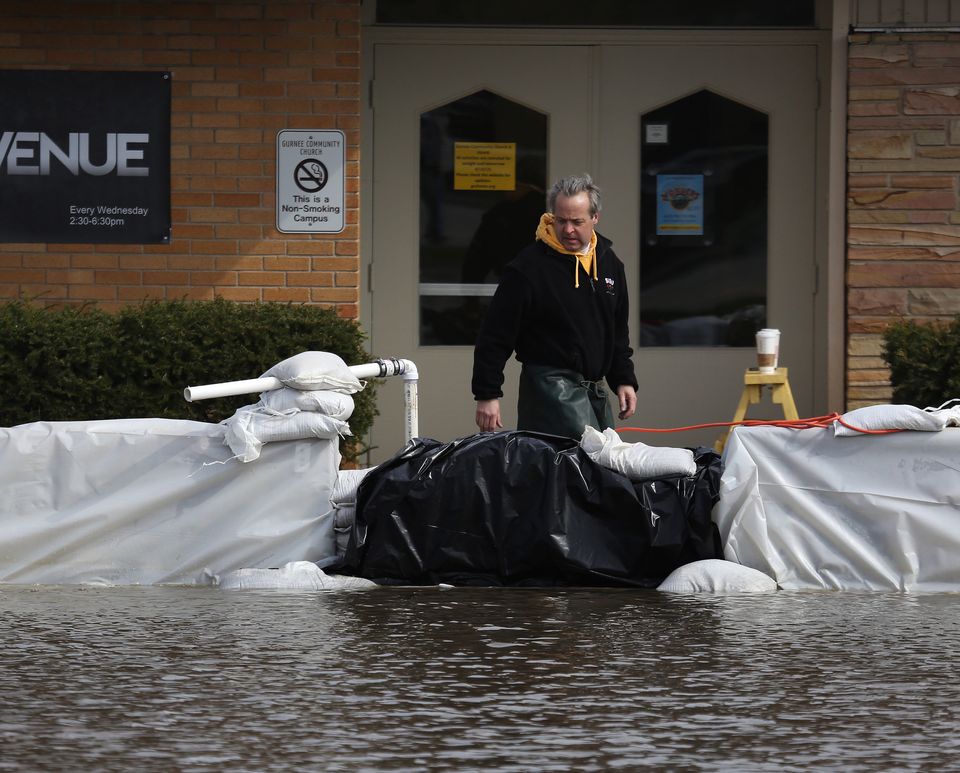 1 / 42
Chicago Underwater
Volunteer Phil Rosborough checks the sump pumps around Gurnee Community Church after the building was surrounded by flooding from the Des Plaines River Sunday, April 21, 2013. "We are keeping the inside dry," said Rosborough. "It is all hands on deck. The downtown area of Gurnee was closed due to flooding. (AP Photo/Daily Herald, Gilbert R. Boucher II)
AP 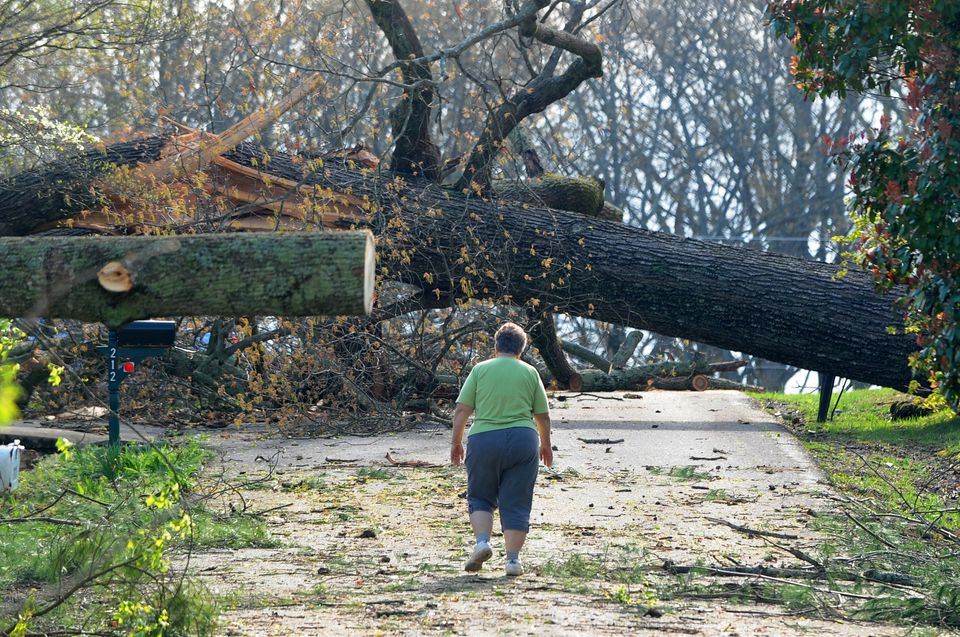 1 / 13
Resident Barbara Baic walks among trees felled by a possible tornado Friday, April 12, 2013, in Madisonville, Tenn. Local emergency management director Brian Turpin said there were no injuries and 8-10 people have been displaced because of damage to homes. A meteorologist from the National Weather Service was on the scene to determine if the damage is the result of a tornado or straight-line winds. (AP Photo/J. Miles Cary, Knoxville News Sentinel)
AP