One float among the 200 that participated in the record-breaking Chicago Pride Parade on Sunday is catching some flak over signs criticized as body-shaming and "insensitive." 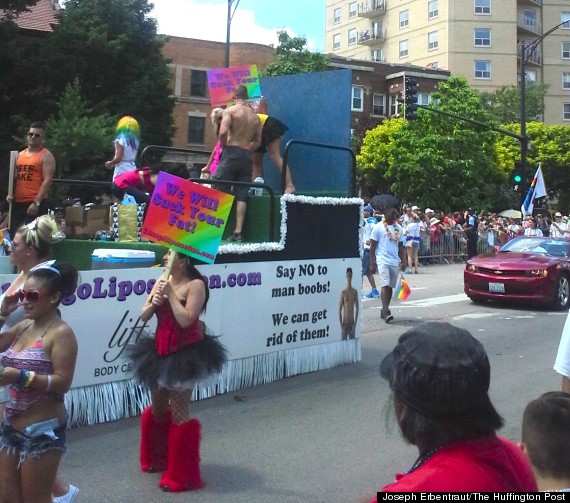 The controversial float was sponsored by Chicago Liposuction, a suburban clinic that offers body treatments including tummy tucks, cellulite removal, skin tightening, labiaplasty and, of course, liposuction. Featured on the side of the float were messages proclaiming "Say NO to man boobs!" and "Don't love your love handles?"

Some of the signs were held by young children, including versions that read "We Will Suck Your Fat!" 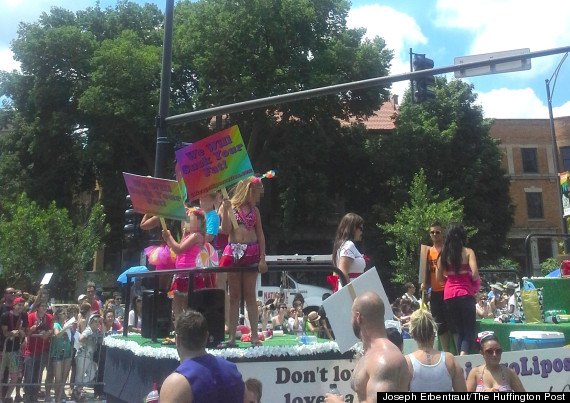 Zach Stafford, a Chicago-based author who writes and speaks about his experiences as a gay man who has battled eating disorders, criticized the language on the float and signs as contributing to the negative reputation Pride events often have for being "too body obsessed."

"Pride Parades are meant to be about celebrating our accomplishments as a community, honoring our pasts, looking to future, and, for me personally, showing the world how much we can love ourselves even when the whole world doesn't want to," Stafford told The Huffington Post.

"When I see these signs, I don't see any of that," he continued. "I don't see love, I don't see pride. All I see is a business exploiting a very stereotypical and deadly idea about gay men specifically: that we just want to be thin."

Parade coordinator Richard Pfeiffer agreed that the float was "really insensitive" to body image issues that have traditionally impacted LGBT people, particularly gay men, at a rate much higher than the general population. Though they are thought to comprise just 5 percent of the total male population, gay men are estimated to represent about 42 percent of all men who have eating disorders. Gay men are specifically much more likely to have bulimia than their heterosexual peers.

Overall, according to the International Journal of Eating Disorders, 15 percent of gay or bisexual men have struggled with disordered eating, which has a higher mortality rate than any other mental disorder.

"We've never censored signs and have not had a problem before so I was really surprised by this," Pfeiffer explained, noting that this was the first year the clinic participated in the parade. "I will be calling them and expressing some concern about it and take it from there. If they are back next year, we won't have that."

A clinic spokeswoman was surprised at the criticism and said she and her colleagues who also participated in the parade were "very proud of our float and what we did."

If the clinic were to do anything differently next year, its operating director Jeanne Shocky told HuffPost, it would be bringing more of the business cards they were handing out to revelers. They ran out of them before the parade was over and were overwhelmed by positive feedback, she said.

"The signs were not meant to be hurtful in any shape of form," Shocky said. "They were meant to be fun. When you do something like this, you want to be seen and want people to read it. So maybe it was a little cheesy, but we really wanted people to see it."

As for the "Say NO to man boobs!" sign, Shocky explained that their clinic specializes in that particular area which many clients, she said, are interested in having work done.

"We just want everyone to realize that Chicago Liposuction is here to support everybody," she said. "A lot of different companies would not go into a parade like that, but we wanted the world to know we support [the community] and the belief in equality."

"What we like to do is help people love themselves and help them look how they would like to look. That's really what we're all about," she said.

Kevin Osten-Garner, director of the Adler School of Professional Psychology's LGBTQ Mental Health and Inclusion Center, said that while he understood the clinic's heart was almost certainly in the right place, he still was alarmed by the message.

"No doubt they provide services to men and women of the LGBTQ community, and they have every right to market themselves in any manner they wish," Osten-Garner said. "However, the tone-deafness of the signage and the float itself is striking. In an event designed to promote pride, inclusion, connection and community, [their] float message is one of division, ridicule and shame – even if unintentional."