It became a Monday routine: Come into the office early Monday and count how many people were murdered over the weekend.

After all, we were used to it. Sometimes there are seven or eight people killed in a single weekend -- and don't even try to count all the non-fatal shootings.

When DNAinfo's counterparts in New York showed us that they produced a timeline showing every murder victim in Manhattan, we were stunned and thought: Chicago needs this.

So months before our site was live, our reporters hit the pavement: knocking on hundreds of doors, making thousands of calls and talking to grieving family members from Rogers Park to Roseland.

Chicago ended 2012 as America's murder capital, with 506 slayings recorded. It's hard to wrap your head around such a number, but when stories and photos started coming in, it became clear that they should not be ignored.

We released the 2012 Murder Timeline to show the human toll of violence in Chicago: from the mother still expecting her son to knock on her window and ask what's for dinner to the four-year-old girl who saw paramedics carry her dying father away.

We hope this project will take people beyond the statistics -- and that the number in 2013 is much lower.

Click here to see the faces of violence in Chicago: 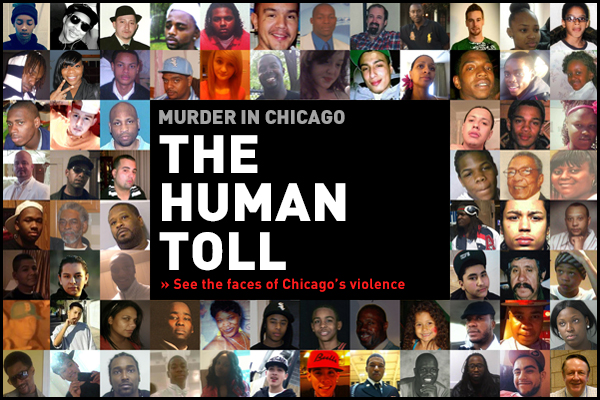