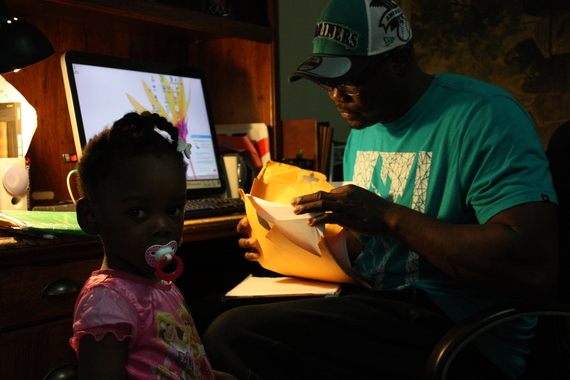 Two little girls crowd around Charles "Slim" Jones, who at 6'4 and 230 pounds hardly comes across as a "Slim." The girls, Jones's two daughters ages 4 and 2, barely reach his knee as he rifles through folders of paperwork, searching the details of a crime from more than 20 years ago.

In 1993, Jones was convicted as an accomplice in the 1990 murder of Quovadis Gates, who was shot during an armed robbery attempt. Jones, only 17 at the time of the shooting, went on to serve 19 years in Illinois state prison, during which time he repeatedly appealed his conviction, citing his original lawyer's mishandling of the case.

In notes from the sentencing hearing, Jones testifies that, when police first picked him up, he was never placed under formal arrest. Instead he was taken to a southwest side juvenile police station where he was questioned, and then, according to Jones, physically assaulted by police until he agreed to sign a statement placing him at the scene of the crime.

Throughout court proceedings, Jones, who was 18 by the time of his arrest, states multiple times that he was held for close to 48 hours and not allowed to see his mother.

"My mother was demanding to see me," said Jones, now 42. "[The detectives] said, 'well, you're not a juvenile, you don't have an absolute right to see your parents.'"

We're sitting in an apartment in Roosevelt Square, a Near West Side mixed-income housing complex, which two years ago the district's police commander deemed the highest priority for area violence. So far, Jones, who moved in with his wife and two daughters Anaiyah and Carlee over a month ago, said he hasn't had any trouble.

Having an apartment and spending time with family are relatively new for Jones, who only received parole in 2010 and has since filed for clemency. It's Jones's exact situation - incarceration without having early access to a lawyer - that a Cook County-based nonprofit called First Defense Legal Aid says could be avoided with a change in city policy. 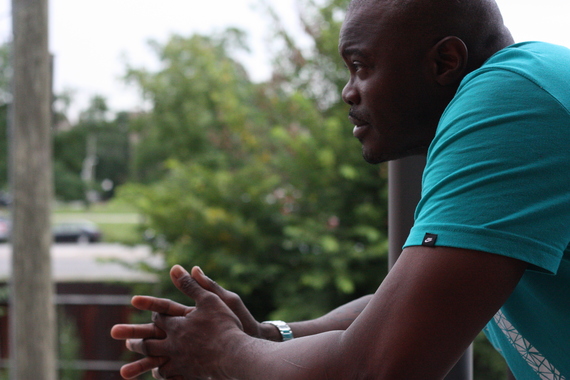 Charles Jones, outside his apartment in Chicago's Roosevelt Square neighborhood.

Last July, members of First Defense - a network of lawyers who provide pro bono legal assistance within Cook County - met with representatives from both the Chicago Police Department and Chicago Mayor Rahm Emanuel's office to propose such reform.

According to First Defense, it's crucial for individuals to access a lawyer within hours after arrest. Sometimes this doesn't happen until some 24 hours later, and more often, the nonprofit says, it doesn't happen until the arrestee's first hearing when they may be appointed representation from the Cook County public defender's office.

Less than half of one percent of arrestees have had a lawyer present at a police station since the department began tracking lawyer visitations in May 2012, according to reporting by Medill University. For every thousand arrests, only three arrestees saw a lawyer prior to the day of their first court hearing.

"Everybody grows up knowing the Miranda rights from Hollywood movies, so the fact that these rights exist but they're not being accessed by 99.8 percent of people who have them is a serious point of disenfranchisement," said First Defense Executive Director Eliza Solowiej.

A cost savings study commissioned by First Defense found that Cook County stands to save between $12 and $43 million per year via facilitation of that kind of early access.

By state law, all Chicago police stations are required to post signs stating that arrestees have the right to a lawyer. But the signs are not required to provide resources, like a phone number or website, towards securing that lawyer. Getting a general nonprofit phone number on those signs was a major part of talks between First Defense, the mayor's office and Chicago police. Ultimately, after months of discussion, the Chicago Police Department nixed the idea, saying it would be perceived as favoritism if any contact information was added.

Instead, the department agreed to install new signs (the old ones hadn't been updated in over 15 years) and potentially produce a pamphlet containing resources for arrestees, which might include advice on requesting counsel and phone numbers for various pro bono legal resources including First Defense, among other information.

Juliana Stratton is the director for Public Safety and Justice at University of Illinois at Chicago. She said the earlier an individual has access to a lawyer, the less likely they are to say or do anything that violates their rights or harms their defense.

"You have a constitutional right for access to counsel and you should be able to invoke that right as early in the process as possible," Stratton said.

From the police department's perspective, in certain cases, it's not that arrestees don't understand they can access a lawyer, it's that they choose not to, according to Chicago Police Department spokesman Anthony Guglielmi.

But for Charles "Slim" Jones, who sat in on the meetings between First Defense and the city, the signs and pamphlets don't go far enough. He said he feels the early access to a lawyer is more important because of the check it puts on the police force.

"When you hold the police accountable, you can unite people," Jones said. "Right now the black community has a total distrust for the police. And in turn, the police are not trusting the community."

While incarcerated, Jones said it was access to education that kept him going. He received his Associate's degree and studied the legal process, filing lawsuits when he felt he was being mistreated in prison. Now he works with CeaseFire, an organization that works with young men and women considered targets for gun crime.

"When you teach these people they have rights, they feel human again. They see results," Jones said. "So I think knowing your rights then plays a direct role to reducing violence in the community."

This story was reported by Chloe Riley for JTM Legal.