After a season of record-breaking snow and cold, the streets of Chicago are starting to look like a Mario Kart course.

The Windy City's all-too-brief warmup was clipped Tuesday night by the latest winter storm to blow into the Midwest.

The overnight snowfall was enough to push this season's snowfall to 79.1 inches, Chicago's third snowiest winter on record. The last time the Windy City had this much snow was the winter of 1977-78, when it snowed more than 82 inches, the Tribune reports.

All that snow has been brutal for the city's streets which are now marred by potholes so large, you could lose a small child (or half of an adult) in one:

Here is a picture from the @suntimes of a man standing in a waist-deep pothole. Story: http://t.co/2WbNRkRBvg pic.twitter.com/7OavDvtuKM

The "mega-pothole" in the city's Old Town neighborhood was six feet deep, the Sun-Times reports. The pothole in the middle of the busy street was left gathering snow, debris, young men (and Chicago's collective dreams of spring) for several days until crews finally repaired it Wednesday.

It doesn't even take a mega-pothole to create a hazardous driving or biking situation either -- plenty of little potholes are enough:

The rough streets all but force the city's drivers to rely on some maneuvers that would be at home on a stunt course:

This winter has led to triple the number of pothole complaints compared to Chicago's last two winters, something that's been causing headaches for Mayor Rahm Emanuel at City Hall as many recently-filled potholes have already required a fix-up.

At least there's one thing the mayor and Chicagoans can agree on:

PHOTO GALLERY
17 Signs You're Over Winter 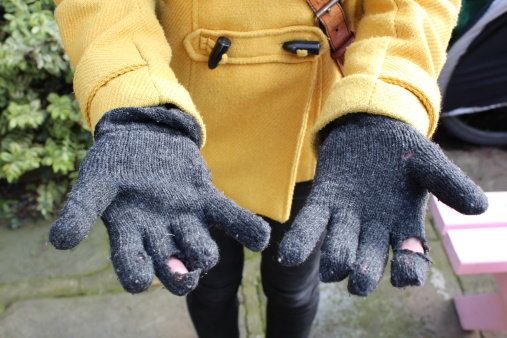 1 / 17
Almost every button has fallen off your winter coat.
And don't even get us started on the gloves.
Getty Stock