Those of us who work with students day in and day out know the brilliance and potential that our students have. We also find ourselves as educators, parents, and tax payers becoming increasingly frustrated by a mayor, "CEO" and appointed school board that consistently and blatantly does not have the best interest of our students at heart.

Students have been organizing to fight the ill proposed school closings and over testing taking place in our schools. This student led group made up of hundreds of students from various schools across the city goes by the name Chicago Students Organizing to Save Our Schools or CSOSOS. 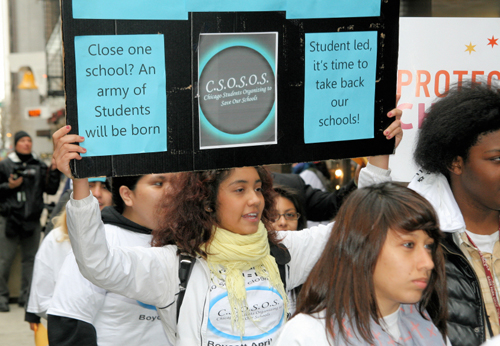 This student led group meets weekly, creates agendas, plans and organizes. These students from various parts of the city cross gang lines, racial lines, to come together to improve this city from the inside out. CSOSOS has organized a walkout/protest of Day 2 of the PSAE testing. Students from other schools have followed in their footsteps and walked out of school to protest the unfair firing of their teachers like what happened at Lincoln Park High School last week.

These student groups and student actions aren't just happening out of thin air, there is a long historical precedent of students leading this city.

As a history teacher I decided to do some research and find out as many examples of student actions in Chicago as I could. The following list is not conclusive, but it is a start to give us all the understanding that our students are not only brilliant but are capable of leading this city. The student actions are well rehearsed and organized.

Their actions cannot be measured with a multiple choice bubble test.

11. Day 2 PSAE walkout April 2013 Students walked out on the 2nd day of PSAE testing against school closings and over testing.

12. Lincoln Park High School students walkout May 2013 Students protesting the wrongful firing of many of their teachers.

Needless to say our students are intelligent and partake in the democratic process that this country was founded on. So if our students feel forced to have a protest to make their voices heard, join them. They are teaching all of us what Democracy looks like, sounds like, and feels like.