A Chicago student advocacy group is fed up with its school system's zero-tolerance disciplinary policies.

Voices of Youth in Chicago Education rallied at Chicago Public Schools headquarters Thursday with a report that demands that the district revise what it calls a skewed set of regulations. They demanded a meeting with the heads of the district.

The current rules are strict: One student was arrested and taken to the police station for writing his name on a desk. Others were suspended for bringing cell phones to school or not wearing parts of their uniforms, The Chicago Sun-Times reports.

WBEZ reports that recent high school graduate Carlil Pittman was expelled two years ago for skipping class, and 10 schools he tried to enroll in wouldn't take him because he had been previously expelled.

The gist of the zero tolerance policy is that CPS students can get suspended or expelled if they "seriously disrupt the orderly educational process." What exactly "seriously disrupting" means is up to teachers' and schools' discretion, but in theory the policy is designed to keep schools safe from violence and drugs.

But the students say that the rules are overly harsh and CPS has a tilted approach -- its disproportionate security and guidance budgets also limits the district from earnings and hurts school graduation rates. CPS spent 15 times more on school-based security guards last year than on college and career counselors: $51.4 million versus $3.5 million, the Chicago Tribune reports.

As this report shows, for too long Chicago Public Schools has pursued a disastrous approach to discipline that is neither effective nor financially responsible. In these times of fiscal crisis, it is more important than ever that CPS bring these policies and practices to an end. VOYCE is calling on CPS to end the overuse of costly, ineffective harsh discipline policies, and instead make smart investments in the policies needed to build safe, supportive and engaging learning environments. It's the right thing for students, families and taxpayers alike.

[See slideshow below for figures from the VOYCE report]

The report results form a year-long collaboration between VOYCE and civil rights organization The Advancement Project that studied discipline policies at various schools across the country and that conducted a cost analysis of the CPS budget, according to the Chicago News Cooperative.

◆ Eliminate regulations that call for suspensions for minor offenses that do not threaten student safety, like tardiness, bringing a cell phone to school or violating dress code.

◆ Require principals to get district approval for suspensions of over five days, to ensure district-wide uniformity.

The Chicago News Cooperative also reports that CPS officials say expulsion rates have fallen more than 28 percent in the last two years, and expect suspension rates to decrease as well. The district has yet to respond to the students' request for a meeting with school board leaders. 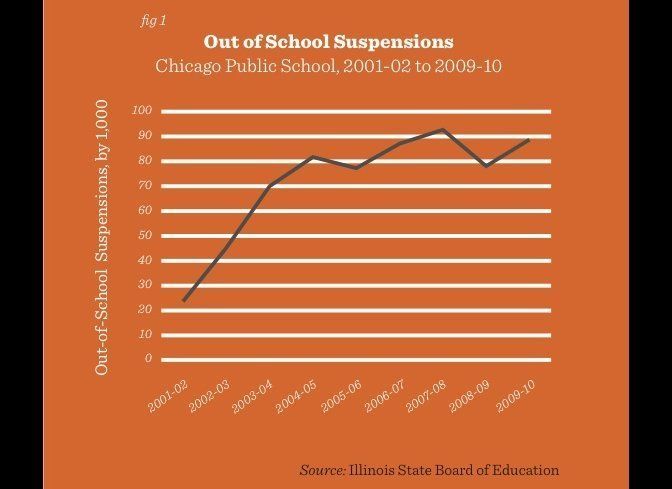