The Chicago-Sun Times is drawing criticism for its inflammatory cover about the plane crash at San Francisco International Airport over the weekend.

The newspaper's front page on Sunday read "Fright 214" — a headline that sounded like a play on the stereotype of an Asian accent. The Asiana Airlines flight from Seoul, South Korea crashed on Saturday, killing two 16-year old students from China.

When contacted by the Asian American Journalists Association, editor-in-chief Jim Kirk said that his staff did not realize that the headline could be read as offensive. “There was nothing intentional on our part to play off any stereotypes. … If anybody was offended by that, we are sorry,” he said.

The AAJA spoke out about the cover on Sunday, saying that it was willing to give the newspaper the benefit of the doubt, though the headline was "certainly unfortunate."

"An editor should have caught the racially tinged wording," the organization continued, attributing the blunder to the staff lacking a "diversity of voices" that might have caught it. Meanwhile, others piled on criticism of the cover.

"Maybe someone could have used a little more sensitivity instead of trying to get clever with the L/R play on words," he wrote. 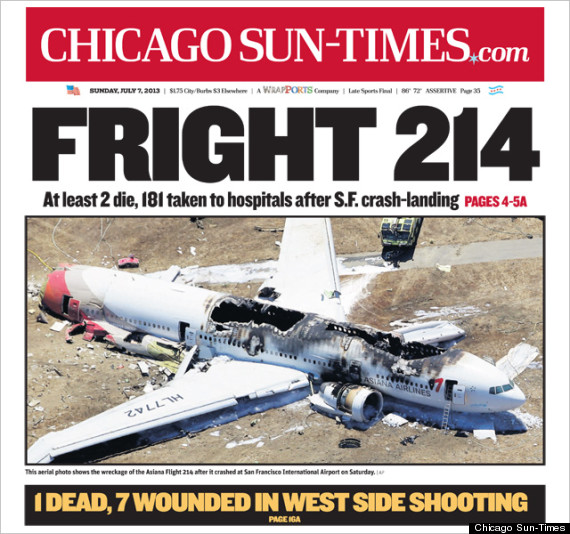