When we think of Chicago, we think the Windy City, maybe the Chicago Cubs finally winning the World Series or maybe even think of Barack Obama's adopted hometown, but we don't really associate Chicago with Mexican culture. This is surprising when one really thinks about it because, in a city of 2.7 million people, Latinos are one of Chicago's most prominent ethnic groups, accounting for 29% of the population. Those with Mexican heritage make up three-quarters of Latinos in Chicago. In fact, Chicago boasts the second-largest population of Mexican-born immigrants of any city in the United States.

But how and why did this Midwestern city become a hub for immigrants? This history can be traced back to the turn of the 20th century, when Chicago underwent its first wave of Mexican migration. Much like the African American community during the Great Migration, many Mexicans and Mexican Americans saw the North as a haven for economic prosperity. Since Chicago was easily accessible through train routes, it became the easiest northernmost city that migrants escaping the Jim Crow South in Texas or the damaging effects of the Mexican Revolution could reach. Furthermore, the Bracero Program, a program to fill the labor shortage in agriculture, had brought in about 250,000 braceros in Chicago alone by the 1970's.

Chicago is an enclave of Mexican American culture created by people looking for economic prosperity, but the path to prosperity has not been so clear. What we actually find is that Chicago is a microcosm showcasing the economic struggle Mexican Americans face nationally. In the recent report, The Chicago Racial Wealth Divide Data Profile that is part of CFED's Building High Impact Nonprofits of Color project, helps to explore the ramifications of racial economic inequality within Chicago and helps put a spotlight on the racial wealth divide and, among other things, the history of Mexican Americans in Chicago. 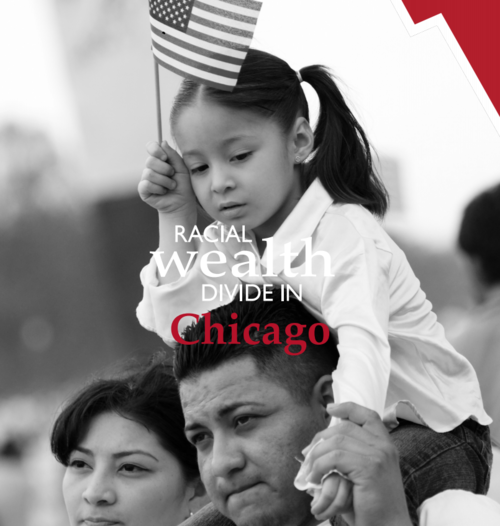 What is seen in this report is that the story of Chicago is one of access --or rather--a lack thereof. Chicago is one of the country's most segregated cities and is a product of decades of policies that have isolated communities of color from decent education, housing, healthcare, and banking. The effects of segregation and lack of access are evident in most neighborhoods of color in Chicago. For example, just using the Pilsen neighborhood, a majority Mexican American community created through Chicago's history of segregation, we find that it has a poverty rate of 28.4%, which is 5.4% higher than Chicago overall. We also find that this trend persists in the majority of the city's Mexican American neighborhoods. Furthermore, Mexican migrants in Chicago are more likely to work in construction, services and manufacturing industries. As such, the 2010 median income of Pilsen was $36,154, which is $13,291 less than the 2010 national median income.

This report was created to better understand how racial economic inequality affects Chicago and help to advance best practices and strengthen nonprofits of color. Along with the release of the Chicago Racial Wealth Divide Data Profile, CFED's Racial Wealth Divide Initiative has also announced their Building High Impact Nonprofits of Color project in Chicago to help build the capacity of five nonprofits of color in Chicago. The Racial Wealth Divide Initiative has selected to work with the following organizations: Chinese Mutual Aid Association, Gads Hill Center, Greater Auburn-Gresham Development Corporation, North Lawndale Employment Network, and Spanish Coalition for Housing. In partnership with JP Morgan Chase & Co, the Racial Wealth Divide Initiative of CFED believes that in order to address the significant financial insecurity facing families and communities of color, local organizations of color with high impact asset-building services must be strengthened. They must be supported because these are the people who are on the front-lines helping to build stronger, more prosperous communities. These are the advocates who are equipped, and well-positioned to deal with the Chicago's inequities found among people of color and offer a sense of hope that is needed in Chicago right now.

Economic inequality in Chicago will not be fixed overnight but with investments in the work of local organizations, and significant policy reform, we can begin to work towards a better future for communities of color like the Mexican American community that will have a powerful impact on American society as a whole.