Plus it's only a five-minute walk from my Andersonville home, which makes it even easier for me to check out this unique group's ambitious efforts.

Unfortunately, Rivendell's inaugural production in their new space doesn't quite match the excitement of the event at hand. Falling: A Wake by Gary Kirkham is an admirable, but ultimately underwhelming, two-hander about a married couple whose lives get turned upside-down when a jet crash-lands near their property in the middle of the night. Among the debris lies the body of a young man, still peacefully seated in his airplane chair, who plays a silent, yet pivotal, third character.

With such a setup, things naturally start with a bang, but then trail off into a series of heartfelt, yet repetitive monologues about loss, grief and hope as Elsie (Jane Baxter Miller) addresses the body as if it were a welcomed visitor.

Kirkham touches on some potentially beautiful notions concerning the healing power of conversation and moving forward through grief, but squanders those moments with a revelation from Elsie's husband Harold (Mark Ulrich) -- a manipulative moment designed to conclude the play with a false note of hope.

Jason Fassl's lighting design casts the show in a constant state of early twilight -- which I'm sure sounds eerily poetic and meaningful on paper, but as an audience member it's eye straining. Upon conclusion of this slight 85-minute one act, you are touched but not particularly moved.

Meanwhile, let's take a trip to Florence, Italy, shall we?

Theo Ubique, a small-yet-mighty storefront musical theatre company in Chicago's Rogers Park neighborhood, has outdone themselves with a grand and glorious production of The Light in the Piazza. Based on the novella by Elizabeth Spencer, Piazza is set in Florence in the summer of 1953. While Margaret Johnson (the glorious-voiced Kelli Harrington) and her beautiful young daughter Clara (Rachel Klippel) are on vacation, Clara fatefully crosses paths with Fabrizio (Justin Adair) -- a passionate, young Italian. Much to her mother's well-founded dismay, Clara and Fabrizio fall desperately in love -- to the point that Margaret has to make a tough choice about her daughter's future.

Co-directors Fred Anzevino and Brenda Didier have assembled a uniquely talented cast. While not everyone fits the role perfectly (Harrington reads a bit too young for Margaret, Klippel a bit shrill for Clara and Adair a bit, well, gawkish), it all works in its own special way. This probably has a lot to do with Adam Guettel's sweeping, sophisticated score, which I feel is one of the most unapologetically gorgeous works to come along since West Side Story. And under the music direction of Jeremy Ramey, the quartet of piano, bass/cello, violin and harp offers rich accompaniment, filling Theo Ubique's cabaret-style space with numerous spine-tingling moments. And of all the shows I've seen here, Adam Veness' set design astoundingly transforms the space into a sunny city square in Florence Italy.

I've always been impressed by the quality of Theo Ubique's productions, and Piazza is no exception. Plus the actors work double-time by serving food and drinks before the show and at intermission. Now, I know what you're thinking: dinner theatre? Technically yes, they serve dinner, but the quality of the performances keeps me going back (though, I can't speak for the quality of the food as I've never partaken. I saw a platter of spaghetti and meatballs on one table... ) 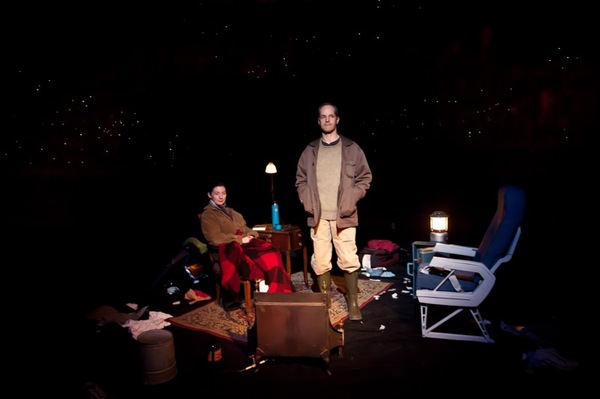