Marsha Godard is an outspoken, 52-year-old woman from the Lawndale neighborhood on Chicago's West Side and a customer at Bank of America. On the morning of Tuesday, August 9, she walked into a downtown office of her bank with a handful of fellow members of Action Now, a grassroots community organization.

She came to talk about vacant properties in her neighborhood that the bank was foreclosing on, and the miserable condition they were in. Instead of getting an audience, she got arrested.

"Next thing I know, it’s a bunch of security guys in black suits telling me, 'You can’t protest in here.' I kept saying, 'I'm not protesting, I’m a customer,'" Godard recalled to The Huffington Post.

As she continued trying to conduct her banking business, security said she had to leave or would face arrest. "I said, 'Arrest me then, because I'm not doing anything here.'"

Police promptly did. She was released on bond later that day.

Godard's arrest, and the backlash it has provoked (scroll down for photos), actually came on the heels of a major victory for housing advocates. On July 28, the city passed a historic new ordinance requiring banks to perform upkeep on vacant homes in which they have a financial interest as a stakeholder in the loan.

But activists, bankers and political leaders alike are uncertain about the future of the law, as the financial industry is casting doubt on the measure's legality and questions remain about its enforcement.

"In 2007, when I first started, I looked at the foreclosure issues that were starting to affect us," said Alderman Bob Fioretti, who represents Chicago’s 2nd Ward on the City Council. What he saw was a crisis in the making: numbers starting to rise sharply, especially in communities of color. In the first six months of 2007, there were about 6,000 foreclosures around the city; in the last six months of 2008, there were nearly 12,000.

But Fioretti said that the administration of former mayor Richard M. Daley "was protecting the interests" of the banking industry, so city council action was stymied.

Meanwhile, many of the families in foreclosure were simply walking away from their homes, leaving the properties vacant. Those vacant homes were often occupied by squatters living in dangerous conditions, and became the scenes of a growing number of violent and drug-related crimes. Even when they were crime-free, the overgrown, decaying houses were blights on the neighboring homes and communities, dragging down nearby property values and worsening the crisis.

The city has laws on the books requiring owners of vacant properties to perform upkeep on them: cutting grass, plowing snow, boarding up doors and windows.

Vacant houses in foreclosure, however, sit in a sort of legal limbo. The person who signed the mortgage has walked away from the home. And while the foreclosure churns through the legal system -- a process that, in Chicago, takes an astonishing average of nearly a year and a half at around 490 days -- the bank hasn’t seized full ownership of the property either. So banks like Bank of America and many others argue that they’re not responsible for the property, either.

Hence the mounting problem of homes -- sometimes entire blocks -- left to decay. In 2010, the number of Chicago vacants was pegged at around 15,000, approximately 85 percent of which were in some stage of foreclosure. And as this city-created map shows, they are overwhelmingly concentrated on the South and West Sides, home to the city’s poorer minority communities: 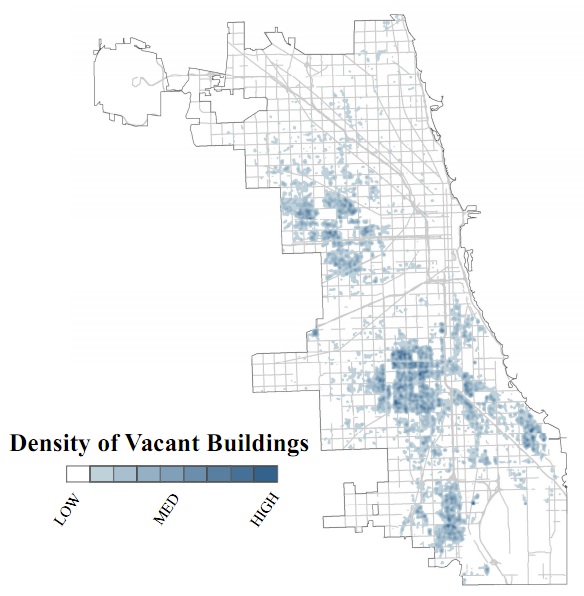 (via City of Chicago)

This year, with the election of Mayor Rahm Emanuel, who promised to help address the foreclosure crisis, Fioretti and his allies on the City Council saw a chance to take meaningful action.

Alderman Pat Dowell of the 3rd Ward sponsored an ordinance, which Fioretti co-sponsored, that would only change a few lines in city building code. But they were a critical few: they expanded the definition of "owner" in the who-takes-care-of-vacant-properties sections of city law to include executors, administrators, managers, guardians, trustees and mortgagees. (Read a PDF of the ordinance here.)

Essentially, the change makes banks responsible for the vacant homes before the foreclosure is complete, taking property maintenance out of legal limbo.

The ordinance passed the City Council unanimously, and Mayor Emanuel released a statement praising Dowell and Fioretti for pushing it through. "With this ordinance, Chicago is leading the way in protecting residents, neighborhoods and communities from the devastating impact of foreclosures," he said in a press statement.

And Emanuel wasn't the only one pleased with the ordinance.

"It’s extremely important," said Braden Listmann, housing policy director at Action Now, the group that brought Marsha Godard to Bank of America on Tuesday. Many in the housing world credit Listmann's advocacy for the ordinance getting passed.

"We’ve seen cases where the bank will go through foreclosure, someone will leave the home, the building is vacant, everything gets stripped and then they deed the home back to the owner, so at no time is the bank at all responsible," Listmann said. "Being able to secure these vacant properties is very important for the neighborhoods."

Not surprisingly, the industry was none too pleased with the ordinance. It circulated a position paper urging aldermen to vote against it, and when none did, it began attacking the law from a different angle.

"We question the constitutionality of holding a secured lender or a servicer as liable for maintaining that property," said Linda Koch, president and CEO of the Illinois Bankers Association, an industry lobbying group.

Koch said that, until foreclosure is completed, banks can’t legally be considered owners of the property.

"You can’t just make a secured lender an owner because there’s a word changed in the law,” she said. "The only way that we are and should be responsible is if we are the actual owner and have the title to the property."

There is also some question as to whether the city of Chicago has the legal right to pass such an ordinance without enabling legislation being passed at the state level, although the "home rule" provisions in the Constitution provide the city a fair measure of autonomy.

When pressed on whether the banking industry would file suit challenging the law, Koch only said, "The IBA is still considering all the implications of the ordinance."

But foreclosure fighters at every level had essentially the same response to the prospect of a suit from the banks against the city.

"I've heard they could be sued, but let that happen," Illinois State Representative Karen Yarbrough (D-Maywood) told The Huffington Post. Yarbrough has been a leading voice on the foreclosures issue in Springfield. "If they can’t do it, then we need a statewide bill."

"Let the banks sue over it," Alderman Fioretti echoed. "We do have the authority to hold them responsible."

And Daniel La Spata, a housing organizer with the powerful community group Logan Square Neighborhood Association on Chicago’s Northwest Side, saw it much the same way. "If they disagree, let them go ahead and sue us," he said. "Sometimes you need to take the gutsy position and see if they’re willing to push back on that. We’re right to pass the ordinance and let them challenge us."

Another political figure who dared the banks to sue was Alderman Joe Moore. He spoke to The Huffington Post at a follow-up rally at the same downtown Bank of America on Wednesday morning. Marsha Godard was back, along with about eighty other marchers from organizations around the city: Action Now, the Service Employees’ International Union (SEIU), the Chicago Teachers Union (CTU) and the Southwest Organizing Project (SWOP), among others.

The alderman came to the rally because he had heard about Godard's arrest, and because his community "is being horribly affected by foreclosures and the unresponsiveness of the banks," he said.

When asked about a possible suit, he said, "Let 'em do that. If they have any concern about their image, they'll accept the ordinance and abide by it."

What Moore was more concerned about was putting the law into practice. Exactly how the city will determine the status of the tens of thousands of vacant homes in foreclosure, and how it will levy fines on delinquent banks, has yet to be determined.

"The key to this ordinance having any effect is enforcement," he said.

As he spoke, the crowd marched behind him, chanting, "Banks got bailed out, we got sold out" and "No justice, no peace!"

Patricia Holden, a Bank of America senior VP, stood at the crowd's periphery in a beige jacket and bright red scarf. Marsha Godard asked to be allowed in to close her account with the bank. Holden warned her she'd be arrested again.

After a few testy moments with police and rousing speeches from activists from the neighborhoods, the crowd dispersed, promising to be back at the same time Thursday.

See photos of Wednesday’s rally (all photos by Will Guzzardi): 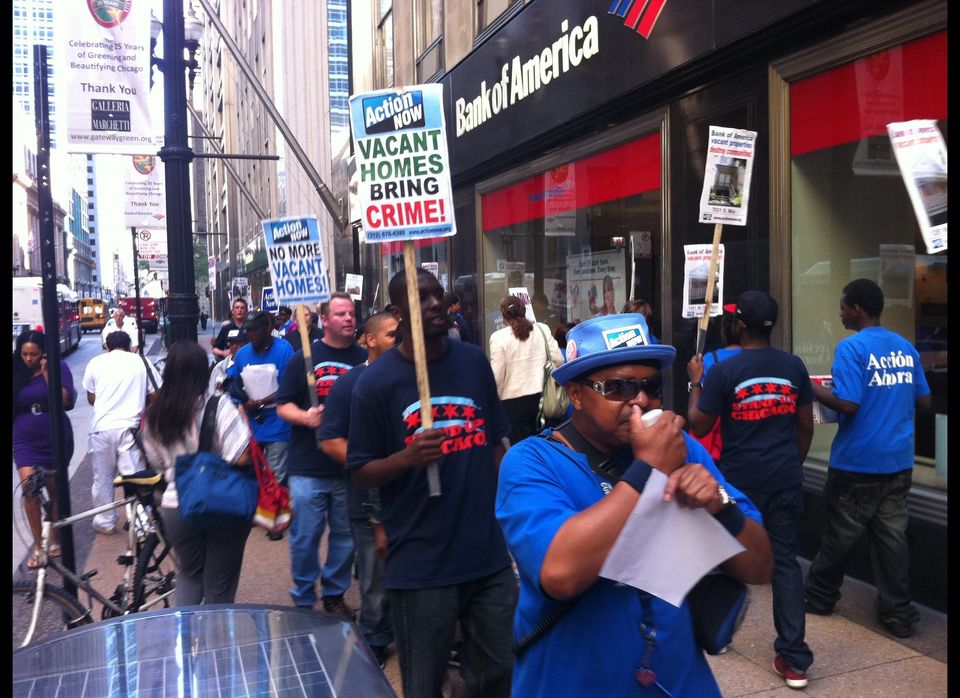 1 / 9
The marchers rally in front of the Bank of America at State and LaSalle. Around eighty people protested on Wednesday morning.