It's good to be previewing exhibits again. Good people. Good art. Some galleries I can count on for consistent quality. Others cross the threshold intermittently. Art's like that. And it's subjective. You might, justifiably, have a very different response than I do. These exhibits open tonight and are free.

Since his untimely death over a decade and a half ago Roger Brown's art has grown on me. I used to find it illustrative. Now I appreciate the innovation and ambiguity. In this exhibit at Russell Bowman we see Brown's quirky juxtaposition of art and objects, bringing dimension and innuendo into the conversation. They may appear odd on a first encounter, but watch the profundity emerge. 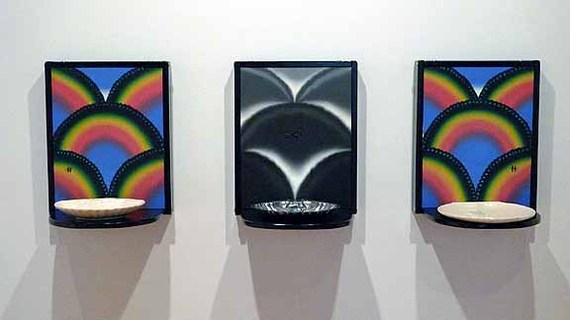 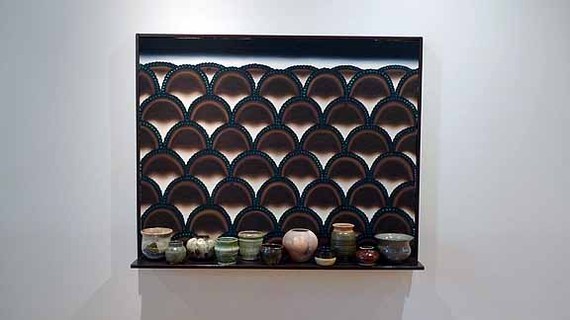 It's been 5 years since Gregory Scott has shown in Chicago, again at Catherine Edelman. My photography of his images look like shots of still, passive photographs, but embedded in each is at least one video screen. It's been great to have follow Scott's career for over 10 years as his insights, confidence, knowledge and humor have grown along with the technology. The magic is in the evidence, which charmingly slows the art viewer down. In the single image below their are two video screens that keep changing, and in the photo with 4 images that's all one piece in different points in its sequence. Great stuff. 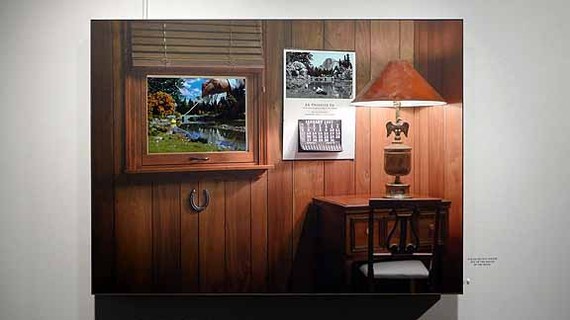 Neil Goodman' sculptures have attained maximum elegance. The subtlety and resonant patinas on view at Perimeter are consummate expressions of balance and grace with negative space as seductive as the bronze is powerful. His works are poetically juxtaposed with the rich works on paper by Yutaka Yushinaga. 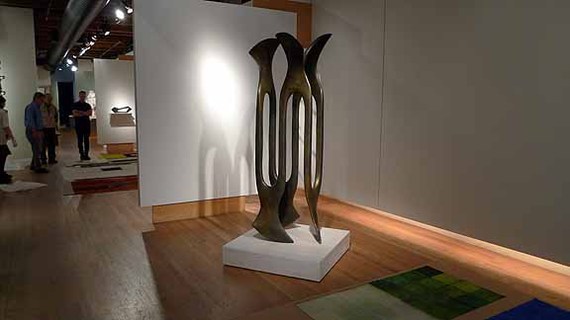 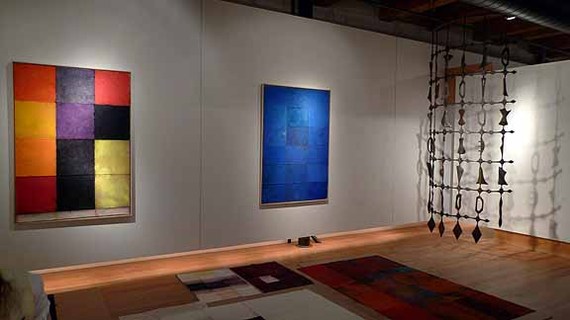 Nearby, at Saslow Gallery, Jordan Scott builds 'paintings' out of the zillions of stamps he's acquired over the years, but I'm particularly drawn to his move to 3-dimensions with a wonderfully seductive box. 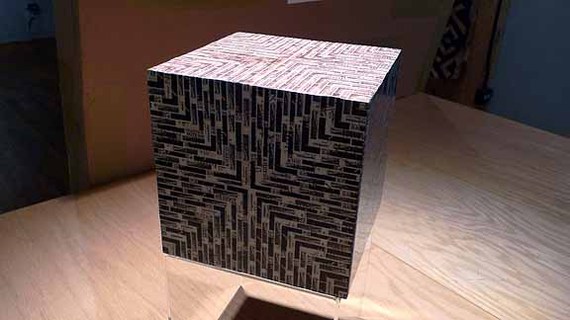 Rene Romero Schuler's paintings of abstracted females forms are on view at Norbach. It's the knifed texture that makes these paintings as successful as they are. 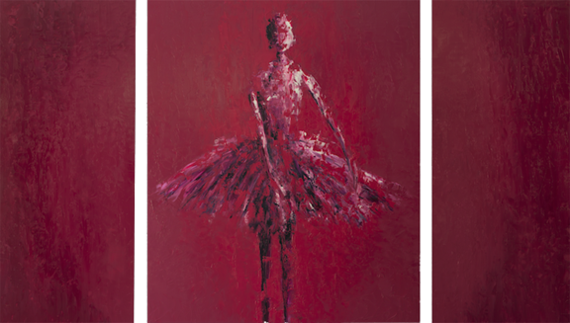 Zolla/Lieberman has undertaken a brave, yet intelligent, transition, moving upstairs for 6 months while rehabbing their space for better efficiency and exhibition of art. Enter through the main building entrance. They're on the second floor. 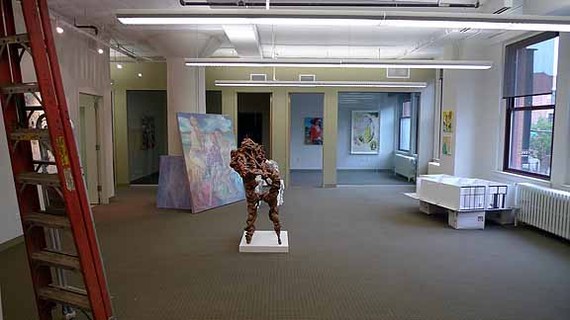 Kim Piotrowski is what's happening in the West Loop, at Warren Projects, with a bravura exhibition, including a dynamic wall-painting. This is another wonderful artist whose work just keeps getting better. 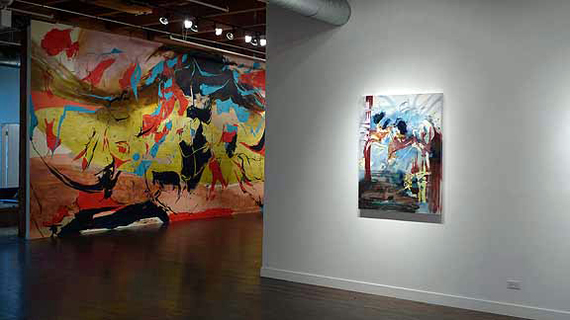 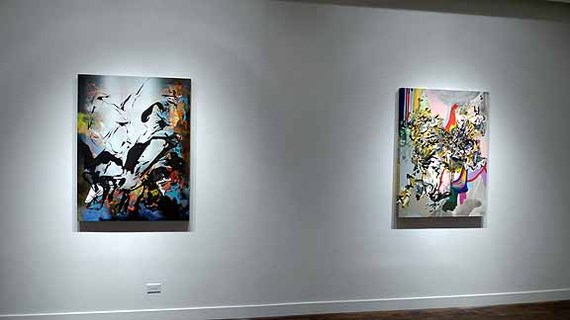 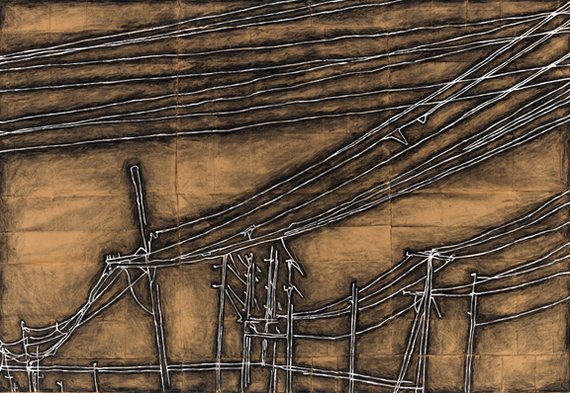 All the shows listed above open tonight. Last night Dan Ramirez's beautiful painting show opened at the Union League Club, which is open to the public. Pretty much, they've been acquiring at least a painting a year since the Civil War. When you go, take a look around. Who else do you know who bought both a Claude Monet and a Kerry James Marshall right after they were painted? 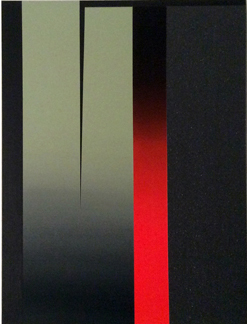 Theaster Gates organized a powerful exhibit which opened a couple of weeks ago and is on view at 2 galleries in the Hancock Building; Valerie Carberry and Richard Gray. A suite of works Mitchell Squire of repurposed police targets delivered a gut punch. 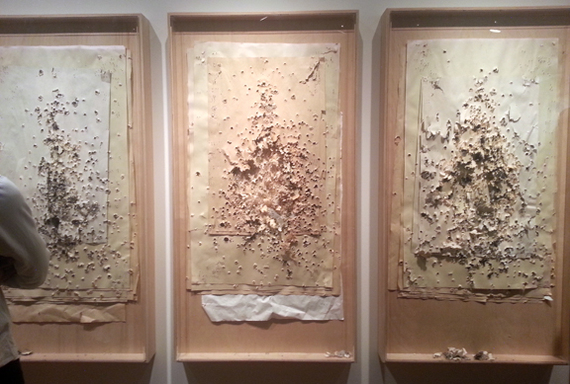