It's here. The day we've all been waiting for -- the start of Chicago's fall art season, one of the few weekends of the year when the majority of Chicago galleries open in consort and present some of their best art which tends to define the gallery and indicate it's direction. Hold on to your socks; this could be the ArtLetter with the most pictures yet.

I started my previewing at Russell Bowman because I can always count on quality there and because I like the conscientious approach the gallery makes to educating the public about recent anticipated in Chicago's art history. On view were a fine selection of very early paintings and drawings by Ed Paschke, whose prices have been close to a quarter of a million in NYC, but here they are considerably more tempered. (There's a great show of Chicago Imagists opening at the Madison Art Museum this weekend, which I'll discuss later.) 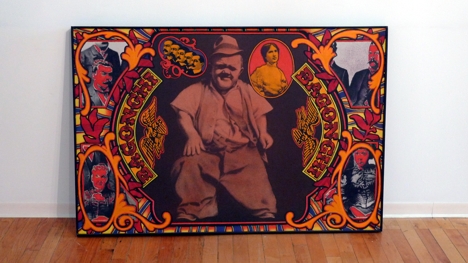 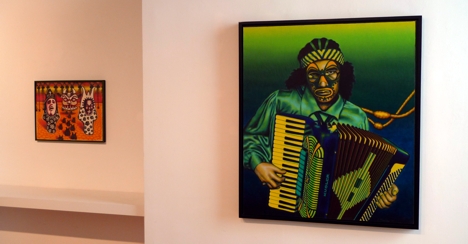 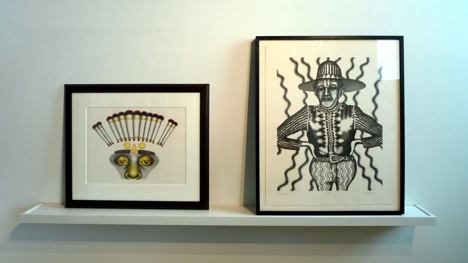 I find Kelli Connell's photographs, opening tonight at Edelman, beautiful and disarming -- a nice tension and confusion -- maybe what I used to call a Positive Ambiguity. The photographs are brilliantly manipulated to pose the same model twice in each image, suggesting a dynamic, but uncertain relationship. 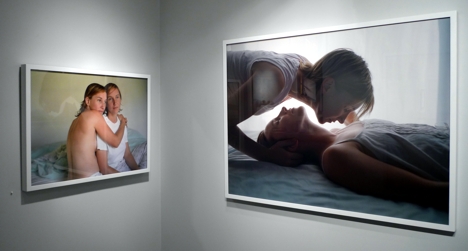 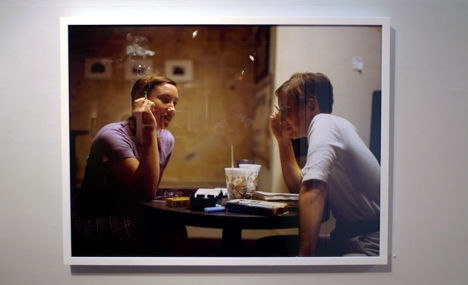 Mary Lou Zelazny has been one of Chicago's finest artists for quite some time, as was evident in her survey exhibition at the Hyde Park Art Center last year. The new work on view at Carl Hammer Gallery is damned near a breakthrough -- as if she's been freed from constraints by having a survey exhibition sum up her past and enable her to step forward anew. Still using collage and paint, Zelazny's work is more complicated, competent and focused. 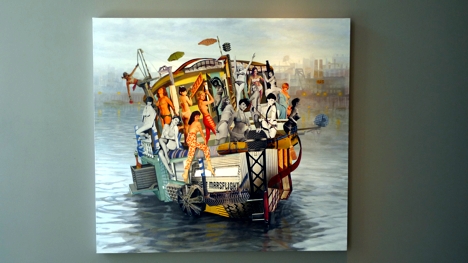 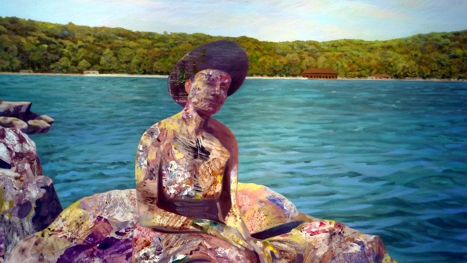 John Torreano's art at Albano completes the galleries I visited in River North. I'm not sure what it is about Torreano's work. I do, and have, found it seductive for decades, even though you could place one of these newer pieces into a show from 25 years ago and not be able to readily distinguish the difference. To an extent, loose daubs of paint replace or echo some of the encrusted jewels, but that's about it -- and I still like them. 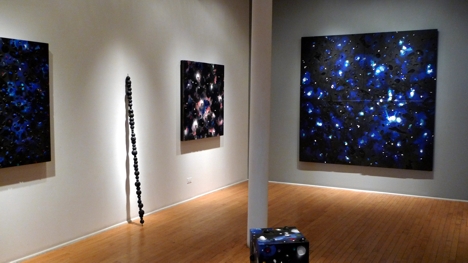 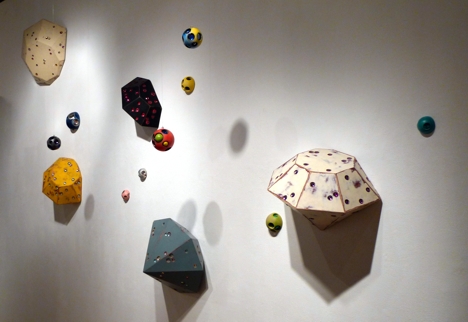 Carrie Secrist has married and altered her gallery's agenda to greater emphasize young and emerging artists and she starts of the season with a bang. Andrew Holmquist is a recent graduate of the School of the Art Institute. Some of his paintings are glorious, a few are clunkers. some are humorous and all are brave. Holmquist has joyous talent and trusts his aesthetic impulses, which over time will surely get honed, but for now he's sharing his not very bridled gusto with us. 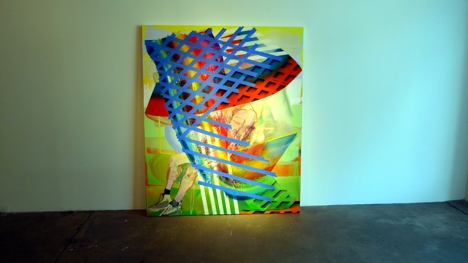 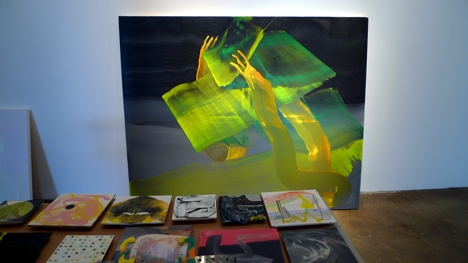 Walsh Gallery is closing their physical space to be better able to navigate the world and serve its artists. Knowing Julie Walsh and the passionate, thorough exhibits she presents I doubt this will be an economizing move. Vivan Sundaram's art is so good I didn't recognize it. I thought he was a fashion designer because the garments he makes are cutting-edge beautiful. Only on closer examination did I realize that an entire man's suit was made out of maxi-pads. The show will have live models showing off his mesmerizing work who, for the run of the show, will be replaced by mannequins.

At Western Exhibitions, the walker, Stan Shellabarger has another profoundly different knockout exhibit. In a long, edtioned, fold out print (book), Shellabarger has trod across printing plates on the floor, inked them, printed an image, walked some more, reinked, reprinted and repeated till done. In another he's walked in a prescribed pattern on paper laid on diamond plate. There's definitely a mantra of passionate labor that yields these beautiful results and singularity of focus. 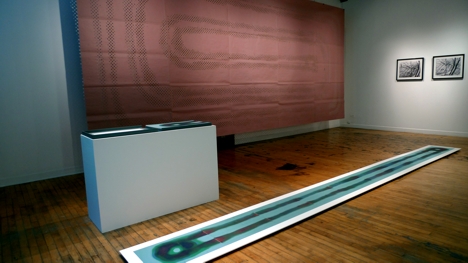 At Tony Wight, Barbara Kasten's crisp, oversized photographs of glass and Plexiglass are formal exercises with a high degree of difficulty. I like these formal works and recognize the work involved to get them to this place that they look simply elegant. (I did all my previewing with Angela Watters who wanted to familiarize herself with all the shows opening, before she ventures out as "Gallery Opening Barbie" and tweets comments about the shows from 60%H20.) 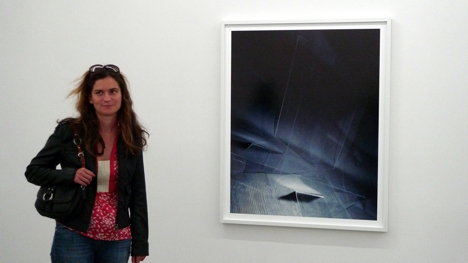 It's amazing how many galleries are opening their season with Chicago artists. One who isn't is Thomas Robertello who has a charming show of new paintings by Bret Slater, from Dallas. Having just completed a memoir on Phillip Guston, this work reminds me a little of him. Some of these ostensibly abstract images can be seen as faces, hats, teeth. Solid, fresh, accessible, fun art, this show surpassed my expectations. 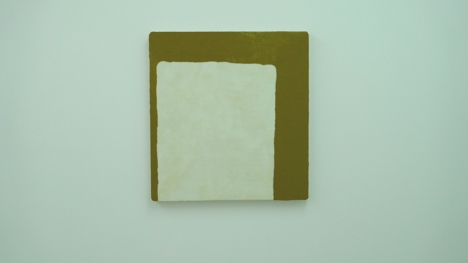 Takohl isn't really an art gallery. Instead it's a jewelry gallery in the middle of an district, but it was here that I found tintypes by Gayle Stevens. Hers is an antique process that delivers sensitive contact images of found objects and artifacts, brought to life and recombined to present delicate, personal meaning and affinities. Really good work that warrants time to unravel and discover.

Ed Valentine's paintings at Linda Warren are light, fun and virtuous. Here's a man who can obviously paint as well as he wants to, but prefers to mix his talent with his humor to give us a different look at people. There's an 'everyman' quality to his work and a notion that the image we're looking at could be us.

There are two shows opening where I've seen the artists work enough over the years to have a sense of where they've been. But where they are is different and/or more mature. Not long ago Angel Otero was an art school graduate student making paintings with what looked to be Silly String that flirted with painting and sculpture simultaneously. That melded into abstract, unmounted painting skins that were interesting, but amorphous. The new work. at Kavi Gupta, builds on those, mounts them on canvas and serves as a substrate for more, smaller skins that grow to become a rich, undulated painting. 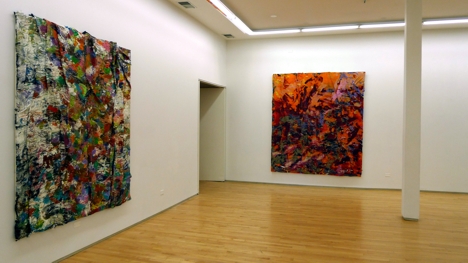 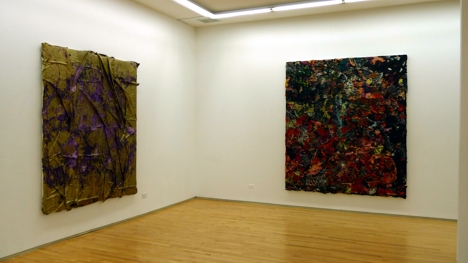 Lorraine Peltz has been painting chandeliers for a while now. Initially they were intermingled with paintings of other domestic objects, but it's the chandeliers that have won out in her new show at Packer Schopf. Over time, they have become richer and more intriguing. They move around the canvas, get combined with other markmaking and take on a life of their own. Their richness is her territory now.

Ebersmoore is a small gallery with a powerful program. Rob Carter's apocalyptic two-screen video is an example with large, crisp projections of a jungle encroaching upon a fictive stadium. The quality, pace and soundtrack seduce to the point where we wonder if vines are growing around our ankles.

Okay, I've been saving some of the best for the end. Dan Gunn has a show opening at Monique Meloche and a 12 x 12 show at the MCA. His work riffs on art history while obfuscating it with diverse 'inappropriate' materials, a quirky vision and solid craftsmanship to the point that the works reveals, yet transcends, its materials. 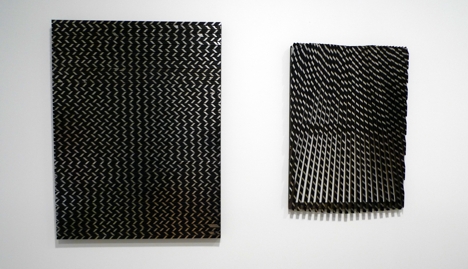 As much as I got around to a lot of shows there are some that I couldn't get to or weren't available when I did. Jason Lazarus and Cody Hudson are at Andrew Rafacz, Juan Angel Chavez is at the National Museum of Mexican Art and numerous artists are up north at what used to be Fort Sheridan and is now the Openlands Lakeshore Preserve (who should really add the artists' names; Sharon Bladholm, Kate Friedman, Olivia Petrides,Ginny Sykes & Augustina Droze (Chicago Public Art Group) and
Vivian Visser to their website) -- this Saturday. These are permanent installations. 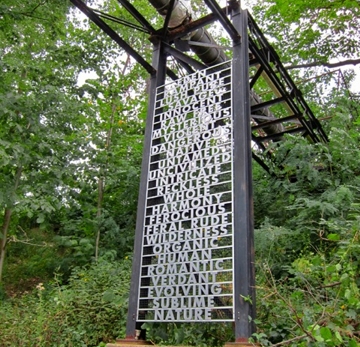 Also Saturday is a wonderful exhibit of Chicago Imagists at the Madison (WI) Museum of Contemporary Art. They sent me images of the show which is almost entirely from one non-Chicago collection, which means lots of solid work we haven't seen before. 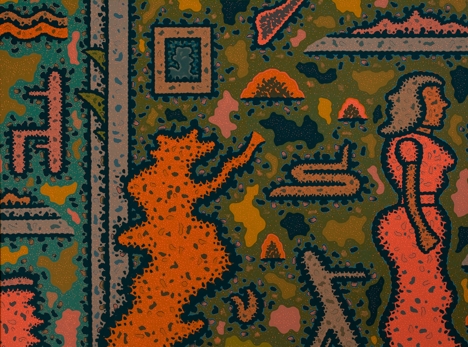 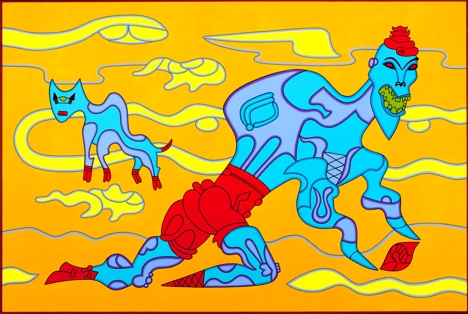 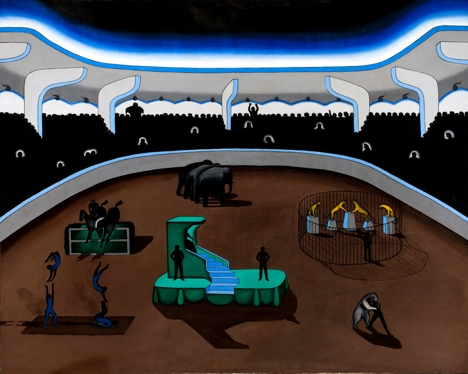 PS: I want to share one of my favorite resources with you: The Visualist will keep you on top of what's going on in the visual arts in Chicago.