Gaze deeply into the eye of a chicken, and what do you see? Some see terrifying stupidity. But researchers at Princeton University and Washington University in St. Louis say they see in the bird's eye the first known biological occurrence of a strange state of matter known as "disordered hyperuniformity."

The potentially new state of matter is the result of the way five photoreceptor cells of different sizes are packed into the retina, the light-sensitive layer at the back of chickens' eyes, according to a written statement describing the research.

In other animals, these "cone" cells are often arranged in a regular pattern, according to LiveScience. Insect cones, for example, are arranged in a hexagonal grid.

At first glance, the cones in chicken retinas appear to be randomly arranged, according to the statement. But with the help of a computer model, the researchers discovered that something else was going on. 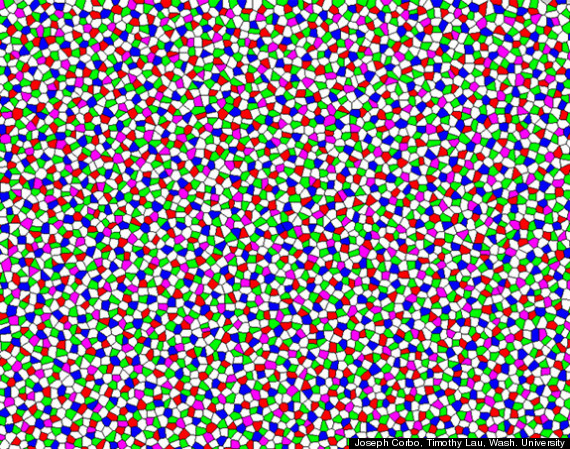 This diagram shows the arrangement of light-sensitive cone cells in the chicken retina.

"Because the cones are of different sizes it's not easy for the system to go into a crystal or ordered state," Dr. Salvatore Torquato, a chemistry professor at Princeton and one of the researchers behind the new study, said in the statement. "The system is frustrated from finding what might be the optimal solution, which would be the typical ordered arrangement. While the pattern must be disordered, it must also be as uniform as possible. Thus, disordered hyperuniformity is an excellent solution."

The discovery of the odd arrangement -- previously seen only in liquid helium, densely packed granules, and other non-biological systems -- is more than a scientific curiosity, according to the statement. It could help lead to the development of optical circuits, light detectors, and other devices that transmit light with the efficiency of a crystal and the flexibility of a liquid.

A paper describing the research was published on Feb. 24, 2014 in the journal Physics Review E.