History has proven many times that carrying large amounts of debt in a fluctuating market creates a dangerous situation. But the production contract model used that is spreading globally in chicken and livestock farming is a sign that agriculture itself is changing, shifting farmers into an increasingly debt-dependent scenario.

We're all familiar with the term "debt crisis." It reminds us of mortgages going underwater as property values crashed, and it rocked the world economy only a few years ago. Fewer people know about the similar farm debt crisis of the 1980s. Farmers were encouraged to maximize their loan capacity to get the newest equipment and seize momentary high prices for agricultural products. The profitability in the markets didn't last, and debt in agriculture reached an all time high of over $350 billion in 1981. Thousands of farmers found themselves underwater on their loans, in debt beyond the value of their assets. In just five years, between 1981 and 1986, more than 60,000 U.S. farmers lost their farm and were left homeless.

What many people might not realize is that many of these farmers that had never missed a single payment on their loans when they found themselves facing foreclosure, which was due to the fact that the value of their assets had dropped below the amount they owed on their loan, a situation called "non-monetary default." The loan did not change, but the market and the value of their assets did.

Today, there are worrying signs that we may be headed for more trouble. According to the USDA, total U.S. farm debt surpassed $365 billion in 2016, beating the 1980s peak in terms of sheer volume. At the same time, the U.S. farming sector is in the third year of an economic downturn as a result of an over-supply of grain globally.

There are some reasons why the record debt has not caused a replay of the 1980s crisis yet. Interest rates have been low, and farm assets are on average valued significantly higher today than they were in the 1980s. The USDA assess farm debt "health" by looking at farmers' capacity to repay the debts they have, a measurement called their Debt Repayment Capacity Utilization (DRCU). DRCU compares average farm debt levels to the theoretical amount of debt that farms could borrow and pay back, based on key factors such as their net income and current interest rates. So with low interest rates and higher value of farm assets than before, the assumption is that farmers have not yet maxed out at the "peak" amount of debt they could carry, at least in theory.

But, at the farm level, the current combination of piled up debt with decreasing income and cash-flow means farmers are facing a familiar squeeze, and that should raise serious red flags about the health and sustainability of our agricultural system.

Chicken farmers at the heart of the debt dependency in U.S. farming

Poultry (chicken and turkey) farmers are a major contributor to the statistics on rising debt levels in American farming. The contracts they have with Big Chicken companies are also the premiere model for production contract agriculture, which is spreading across agricultural industries. In this model, a company (like Tyson or Perdue) owns the chickens and independent farmers own the debt for the chicken houses and equipment required to raise them. This displaces the burden and risk of the debt related to production onto the farmer. This contract model has been praised by economists, including Tom Vukina of North Carolina State University, as being "brilliant" for solving problems of efficiency for big companies. Similar agreements are showing up in hog contracts, cattle, and even seeds. As other agricultural industries move in this direction, they are systematically exposing more farmers to higher stakes in debt related risks.

Poultry farming is "capital intensive." An average new chicken house costs $300,000 to build, and the average chicken farm today has at least 4 houses, though the current trend is to build new farms with many more. That means in order to get into the business, a farmer has to invest over $1 million just to get setup -- a lot of debt to carry when you're paid on average between $0.05 cents and $0.06 cents per pound of chicken produced.

Farmers take on huge personal risk to get this size of a loan, by putting their own assets on the line as collateral, often their family home or farmland. Many banks will not grant these large poultry loans unless they are guaranteed by the federal government; in many cases, the Farm Service Agency (FSA) and the Small Business Agency (SBA) offer guarantees to banks of up to 95% of the value of the loan if the farmer defaults. This kind of taxpayer support for farmers has a lot of positive impacts. For example, guaranteed loans ensure that many farmers have access to credit when they most need it. But in the case of poultry loans, with the lion's share of the bank's risk passed on to the taxpayers, there is concern that these guarantees reduce the bank's incentive to scrutinize the viability of the loan.

Poultry farmers are over-leveraged on average compared to other farmers. In 2007, poultry farmers had the highest DRCU of any sector in agriculture, at nearly 70%. This means that poultry farmers are have already leveraged nearly 70% of their capacity to pay back debt, just to keep the business running. This calculation does not include their livelihood: feeding their family, paying for their own home, etc. Close followers in high DRCU were hog and dairy farmers, industries that are increasingly adopting contract models similar to poultry. In the same year, according to research by USDA's Economic Research Service, the poultry sector also had a larger than proportional amount of insolvent farms, compared to other sectors.

In other words: debt dependency is business as usual in the poultry industry, and it poses a serious risk for farmers. 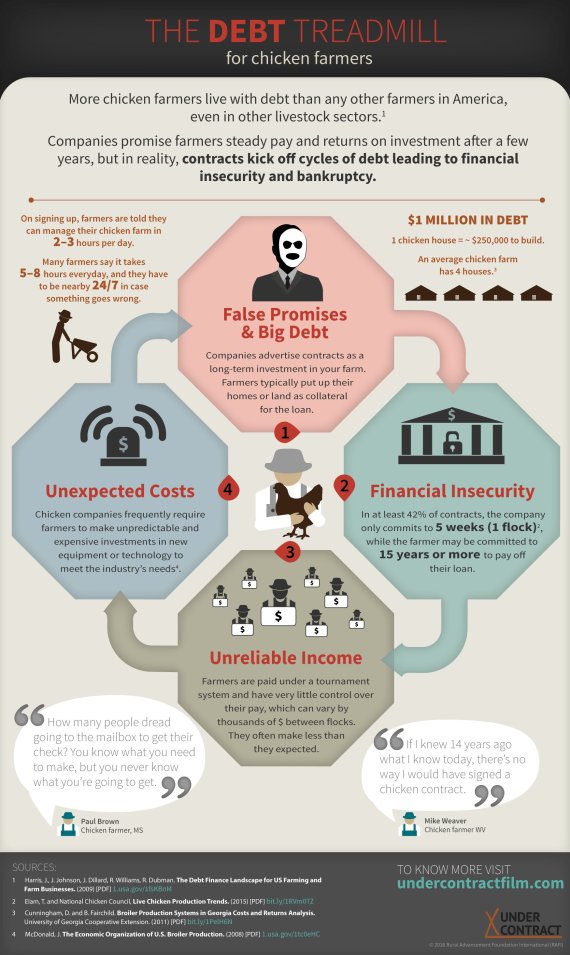 When a chicken farmer gets a loan and signs a contract, they start a cycle of debt that for some is literally never-ending. (See our infographic above for more on this topic). This same cycle happens time and again to chicken farmers in different states, with different companies; it is an industry-wide problem. Their experiences can be described in four steps:

1) An initial payout period for their loan may be 15 to 30 years long, in stark contrast with their contract. Contract lengths generally range from between 1 flock to 10 years, but a 2016 National Chicken Council study showed that over 50% of contract poultry farmers have been offered a flock-to-flock or less than 1-year contract by their company.

In the same study, the author acknowledges that even multi-year contracts lack enforceability for farmers: "In reality, a multi-year contract offers little additional assurance over a flock-to-flock contract" he states. There are several clauses in a chicken contract that will allow a company to back-out, slow down the placement of chicks, place less chicks, change the type of chicken the farmer is raising - and other decisions that can drastically affect a farmer's ability to manage debt payback.

2) Once they're in the business, farmers struggle to find stability under tournament payment systems. The means for calculating farmer payment is not straightforward. Their pay is based on how their efficiency ranks in a pool of farmers whose chickens are harvested at around the same time. But their efficiency rating also includes company decisions and actions - like the quality of the chicks and feed they get, diseases coming from the hatchery, the day their chickens are picked up and issues in transportation. These can have a significant impact on the farmer's performance and lower their rank in the tournament, which directly corresponds to lowering their paycheck. As a result, farmers paychecks vary by thousands of dollars from flock to flock. This exposes them to increased risks of short-term cash flow problems, like feeding their family and dealing with late payments and lower credit scores.

3) As farmers begin to make progress toward their loan payments, the risk of unexpected upgrades becomes a significant threat to their financial stability. Once a short-term contract has expired, farmers may be asked to upgrade their housing, even though they were told when they signed up that it would be "good" for 10-15 years. These unexpected expenses can amount to tens or hundreds of thousands of dollars, and force farmers into a dilemma: skip the upgrade and risk losing the contract (and thus losing the farm or home as collateral for the loan), or burn up the equity they have built up to get a new loan, and extend their debt even farther into the future.

Required upgrades are unpredictable, expensive, and common. According to USDA data, between 2004 and 2006 chicken farmers spent over $650 million on upgrades to their chicken farms, an average of $38,000 per farm. In a different survey, ARMS found that over a three year period from 2009 - 2011 50% of contract poultry growers reported making an upgrade, and the majority of those (29% overall) were required to do so by their integrator.

4) The final step is starting over. Farmers refinance, and hope for the best, and the light at the end of the tunnel gets farther away. For many farmers, this treadmill means they will carry a risky loan for decades, with their personal assets tied up in it and no alternative way to service the debt.

This is not the model for agriculture that we should promote if we want to avoid another farm debt crisis.