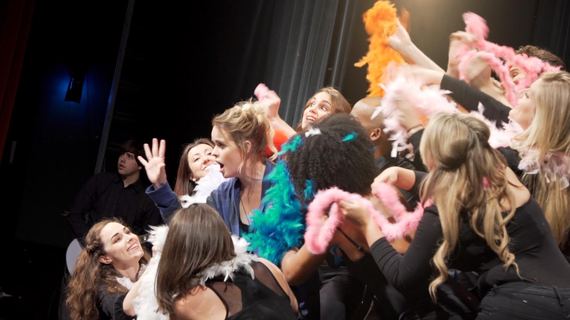 The world has fallen in love with Orange Is The New Black. For a show about prison, it can sometimes seem more like the summer camp everyone wants to attend- and that can be attributed to the close familial bonds the cast shares. Fans feel a sense of belonging with the sprawling cast of diverse characters, and the fact that they feel it too only strengthens that feeling.
So, when fans get a chance to see Happy, Yummy, Chicken they will be overjoyed to be able to see three favorites- Taryn Manning, Emma Myles and Diane Guerrero, team up for the delightful cult-classic they are looking for. Written by Brandon Monokian, the movie is a hilarious mockumentary about a town that puts on a musical based on a Forrest Gump style news story of a girl who sits in a restaurant eating chicken for months on end following a break-up. If the plot sounds ridiculous- it's should be. The extremely smart, tongue-in-cheek flick is reminiscent of other great mockumentary favorites like Drop Dead Gorgeous and Lisa Kudrow's genius show, The Comeback.
The laughs are intelligent and sophisticated, and the Orange girls all get to show just how exceptional they are at comedy. Myles is, as usual, scene-stealing and hilarious, always brave enough to take chances and put herself out there for a laugh. She is downright fearless in her technique. Guerrero takes on a very different character and shines brightly doing so, showing that there is much more to her than we've seen. And Manning shows what fans of OITNB have known for a very long time- she deserves award gold. Manning is a genius at finding the subtle nuances in the characters she plays and humanizing them in a way that makes you champion their stories. She can turn even the broadest caricature into a person you love. Manning also takes on the role of Executive Producer on the project, helping to realize Monokian's dream come to fruition- which makes her all the more lovable.
Taryn, Emma, and Brandon sat down to talk about the project a bit (Diane was currently promoting her book; In This Country We Love: My Family Divided.) Here, they discuss how the project came about, working together, and some Orange scoop!

Explain how this all came about and what drew you to the film. Taryn, what drew you to produce the project?
TARYN: I met Brandon very randomly. We were both involved in another project that Brandon was going to do a re-write on and we were trying to find this director, so he hit me up over twitter and we became friends. The next thing you know, he was sending me this script called Happy, Yummy, Chicken- I loved the title immediately. I read it and it was hilarious, odd and unique and all I could think was what a great writer this kid was. So, then he asked me to be in it and I said yes...and then when he told me his dream cast, I tried to help facilitate that. It was very fulfilling to help him realize his dream and really fun.
EMMA: Well Taryn actually sent me the script and said, "this is so funny we have to do it!" She told me to read it and asked me what character I wanted to play, which, as a non A-list movie star, never happens so I was like, "BRING IT ON!" I loved it and laughed the whole way through. Then I found out that Diane had been offered a role, so Taryn and I were telling her that she had to do it too. Luckily for everyone involved the timing totally worked out.

This film has a very big "theater kid" attribute to it. Were you a theater kid?
EMMA: I was definitely a theater kid. I did all the plays. I literally spent all of my free time watching movies and studying performances and trying to figure out what made a performance good. We had great dialogue to work with in this movie, but we also had free reign to just do whatever- so a lot of what you see was just Brandon and I riffing completely off the page and I think we found some really funny and ridiculous stuff that I don't think either one of us anticipated.
BRANDON: I have also always been a theater kid. In terms of how having a theater background helped in filming, all of the actors playing the cast of the musical come from a theatrical background so it gave it the film an authenticity. Also, a lot of times when you are working for different regional theaters, you have a really short amount of time to put on a full scale production. We shot all of "Happy Yummy Chicken" in only 6 days with no rehearsals, so I think having a group of people used to working under crazy time restraints was invaluable.

Talk about the hilarious roles in the film, and the stereotypes that are mocked a bit. It really captures everything from your "theater gay" to "simplistic American." How do you girls think your characters relate or differ to your Orange characters?
TARYN: I don't see any similarities between the characters. In Happy, Yummy, Chicken, my character is more of an open-minded hippie, which is very different from a lot of the other roles I've taken on- particularly in Orange. The characters I look for might sometimes seem to have similar backgrounds, but they're very different in their story, and that's what is important- realizing that everyone has a story to tell, regardless of their upbringing and background, and it's wrong to judge them. And these stories really offer very complex and interesting people.
EMMA: I don't really know why I've been relegated to always playing these kinds of characters, but they're very fun and I enjoy being employed! But, in all seriousness I grew up in a very small town, so I guess you do what you know!
BRANDON: In all the writing I've ever done, I'm just trying to document my own life experiences (albeit through many crazy characters), so there really is no agenda beyond that. Every character on screen is either a representation of myself or of people I know. I just try to tell the truth as best as I can though art. The goal isn't to make fun of the underdog, but just paint a picture of what the underdog is going through and what they are rising above, and I think our film has a few of those situations.

like Orange, this movie is destined to have a huge LGBTQ following. Talk about working on projects the LGBTQ community loves and why that's important to you.
TARYN: It's not that working on "gay projects" are important to me- I don't put a label on it. I don't put it in its own category, it's all part of the category of life. It's great to see the community be accepted more, and people are evolving. But, I don't see any kind of divide in projects- all races, genders, sexual orientations- it should all just be based on love of human kind.
EMMA: Sadly I am sitting here answering these questions hours after the tragic and brutal massacre in Orlando, so I feel tied to my LGBTQ friends more than ever. I'm heartbroken. I'm very angry. I want it all to stop. I want of this hatred and ugliness to disappear. There is no reason for this kind of gratuitous violence. Embracing the gay community isn't a choice, it's a necessity.
BRANDON: At this year's Tony's, James Corden said "Theater is a place where every race, creed, sexuality and gender is equal, embraced and loved," and being that we made this film for theater people, I hope that even the slightest bit of the beautiful spirit of what he said is able to be seen by audiences when they watch our film. 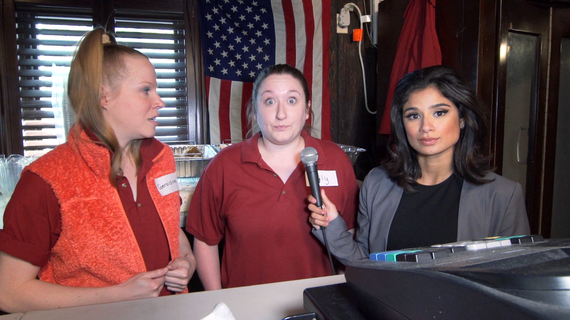 Brandon, what inspired you to come up with this wacky story?
BRANDON: A while back I was cast in the worst production imaginable of School House Rock. Nothing was going right with it and the guy that ran the theater company gave us this huge lecture and called us all inexperienced. Around the same time, I read a news article about a girl who sat in a 24 hour restaurant eating chicken for a week and since I was so miserable at the theater I thought that maybe I should leave the show and just go sit in a restaurant and eat chicken. That seemed bad for my pores, so I ended up just writing about it instead!

The music in the film is great, hilarious and original- and fans get to see Taryn sing! Always a treat. Talk about the music, and what's next for you, Taryn, musically?
TARYN: I've been working on an album for a while, and I've been looking to put some stuff out to the public- I'm just waiting for the green light to do so. I'm so excited about the new material. I really love it and can say that proudly.
BRANDON: There is a bunch of live music in the film and all those songs are by Erik Ransom and Andy Peterson, as well as this incredible musician Joey Contreras- he's on iTunes. The only song that isn't live was written specifically for the film by Suzzanne Douglas [Also in the film, Douglas steals scenes as the wacky director.]

This is a comedy and Orange blends comedy and drama often. Which do you prefer?
TARYN: I prefer drama a little more, but I definitely need a little comedy in my life right now- so, I was glad to be able to have that in this film!
EMMA: I'm a trained actor so I'll do anything people will let me do. But it's not about genre, it's about the actual character and how much I can play with this and how many layers can I add. I'm very comfortable with drama because I have a well of tears inside of me and a lot of what I've been though and seen in my real life allows me to slip into drama relatively easily. Comedy is a very different technical beast. But I love it all!

Talk a little bit about Orange this season- what can fans expect and what is in store for your characters?
TARYN: It's a little different of a season. We explore the over-crowding of the prison system and the confusion of that.
EMMA: Oh come on you know we can't talk about that! But, I can say that this season is very intense and the stakes are very high. As for me, specifically? Leanne still has brown teeth. 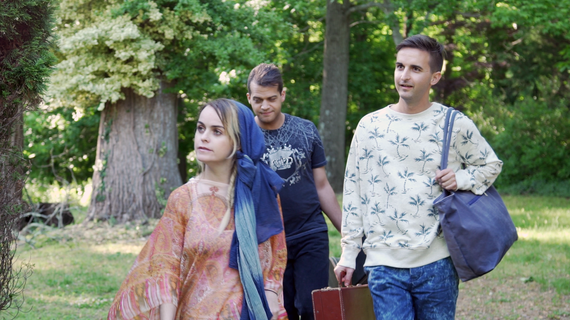 What else do you coming up?
TARYN: There's the album, and I just completed a film called The Vault in Atlanta that I'm excited about. But, my character on Orange keeps having this evolving growth-spurt and that is definitely taking up a lot of my focus right now! It's great as an actor.
BRANDON: I'd love to keep working with this same group of people on different films, maybe like an American Horror Story type anthology!
EMMA: What's next? Season 5 baby!

And with fans already binge-watching Season 4, Season 5 can't come soon enough! Hopefully the Orange family will give fans more sweet treats like Happy, Yummy, Chicken to fill their fix while they wait!
Season 4 of Orange Is The New Black is now streaming on Netflix, starting June 17th. Happy, Yummy, Chicken is screening selectively.