In 2006, something happened that may forever change forest conservation. Following a year-long investigation, Greenpeace published the Eating Up the Amazon report, detailing how the most diverse forest on Earth was being slashed, burned and turned into vast fields of soybean plantations at an alarming rate. 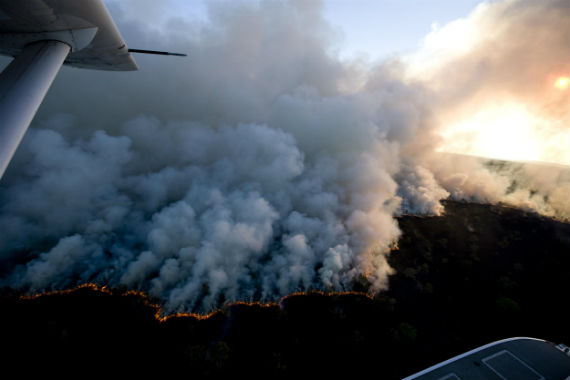 In the 2004-2005 planting season alone, nearly three million acres were planted with soy where rainforest had recently stood. Much of that soy was shipped to Europe to feed chickens used by fast-food chains like McDonald's. Fueled by people who didn't want to buy chicken nuggets tied to rainforest destruction, a hard-hitting campaign took off around the world. To its credit, it didn't take long for McDonald's to act.

But companies like McDonald's couldn't act alone. After all, they didn't own soy plantations in Brazil; they buy soy through brokers. That's where traders of soy -- notably agribusiness giant Cargill -- came in. As McDonald's and Cargill rolled up their sleeves to address the problem of soy-driven deforestation, Greenpeace halted its campaign and a productive collaboration began.

The result, effective in July that year, became known as the Soy Moratorium. Over time, the list of those engaged expanded to include Brazilian soy producers, financial institutions, the Brazilian Government, other NGOs, and more soy buyers. The main idea is remarkably simple: big soy traders in Brazil stopped buying and selling soy from farms linked to new deforestation.

Since deforestation is visible, implementation is monitored and verified through satellite imagery and aerial reconnaissance. With these straight-forward elements, the Soy Moratorium became the first voluntary, sector-wide "zero deforestation" initiative carried out in the world. It set a precedent, and produced big results.

Despite recognition and accolades for its effectiveness, the Moratorium is not permanent. It has been renewed several times since 2008, but no one knows if it will stay in place after it is set to expire in May 2016. If it is not renewed, or if something as effective at curbing deforestation is not put in its place, the consequences for forests, our climate, people, and profits could be severe.

Whatever its future, there is no denying the Moratorium has inspired similar initiatives around the world. It has shown that market-driven zero-deforestation commitments are practical and have the power to improve the sustainability of entire industries.

This voluntary mechanism has succeeded where governance has too often fallen short. Some government regulations allow for -- or encourage -- deforestation. Even when strong forest-conservation laws are in place, a lack of capacity, political will, or outright corruption can result in rampant illegal deforestation.

The Soy Moratorium has helped address these shortcomings through a straight-forward approach, requiring transparency and accountability backed up by the undeniable power of the marketplace. By barring market access to forest destroyers, the Moratorium removes the financial incentive for clearing forests, and replaces it with a level playing field where producers are held to the same rules.

Similarly, about 80 percent of Indonesia's pulp and paper capacity is covered by corporate commitments barring further deforestation. These newer initiatives have yet to deliver the real-world drop in deforestation the Soy Moratorium has. With more marketplace pressure than ever, there is good reason to believe they will.

No one expects mechanisms like the Soy Moratorium to entirely replace the role of governments in protecting our world's forests. But it is clear that market-based schemes can drive innovation, collaboration, and open up political space for enduring solutions to deforestation. To achieve the international Sustainable Development Goals presented by the United Nations, practical, results-based initiatives like the Soy Moratorium are needed now more than ever.

This post is part of a series produced by The Huffington Post, "What's Working: Sustainable Development Goals," in conjunction with the United Nations' Sustainable Development Goals (SDGs). The proposed set of milestones will be the subject of discussion at the UN General Assembly meeting on Sept. 25-27, 2015 in New York. The goals, which will replace the UN's Millennium Development Goals (2000-2015), cover 17 key areas of development -- including poverty, hunger, health, education, and gender equality, among many others. As part of The Huffington Post's commitment to solutions-oriented journalism, this What's Working SDG blog series will focus on one goal every weekday in September. This post addresses Goal 15.