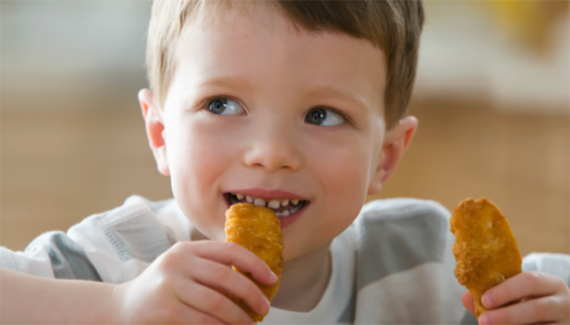 We're sure by now, you've all heard of the recall of the Applegate Farms Chicken Nuggets because of possible plastic contamination. And we're here to tell you today that plastic isn't the only bad thing that could be in these nuggets. Let's be honest, our kids love their chicken nuggets! Kids devour them and with mixed feelings, us parents dish them out because they're easy, kids gladly eat them and they are a lay-up for those with picky eaters. Nuggets have become synonymous with "kid food." You know this, I know this and restaurants know this since they are typically the first item on every kiddie menu. And without judgment, I have a sneaking suspicion, they are quietly sitting in your freezer right now.

Though maybe not the healthiest thing around, most of us might not feel THAT badly about tossing a few nuggets on a plate and being done with dinner. After all, it's just breaded chicken, right? And when you've got a screaming kid in your house, a long day at work behind you and dinner ahead to prepare, it's an easy out. So how bad could these things possibly be? Well, honestly, very bad. According to a WSJ article, there are not many foods out there that are as "unhealthy and insidious" as the chicken nugget. We already know that we should stay away from certain foods like, hot dogs. They are unhealthy, processed, and contain questionable ingredients. But there hasn't been that much coverage on just how bad the ubiquitous chicken nugget really is. Nuggets may seem like a better alternative to junk food like hot dogs, but we are here to tell you that chicken nuggets ARE junk food.

So let's talk about what is so bad about nuggets. And to be clear we're talking about the frozen boxed stuff found in Aisle 10 of your grocery store. First of all, the "chicken" part of "nugget" is a gross exaggeration. You should know it's typically not straight up chicken. In order to get that texture, color, and perfect star shape our kids come to expect, the meat has to be "comminuted." This means that a bunch of white meat, dark meat and chicken skin get pulverized together into a pink paste-like concoction. Then fillers like starch and gums get added to hold it all together. Add in extra sodium and extra fat to appeal to little kids' taste buds, and by the end of it, 50-60% of the calories from the nugget ends up coming from fat. Dr. Richard deShazo, a professor of pediatrics and medicine at the University of Mississippi Medical Center, and his team dissected a sampling of chicken nuggets and concluded that the nuggets were 50% meat and the rest was "fat, blood vessels, nerve, connective tissue and ground bone - the latter by the way is stuff that usually ends up in dog food." (Read more of the study here). For the same reason many of us are grossed out by hot dogs, we should be disgusted by chicken nuggets.

The amount of processing that has to take place in order to make frozen nuggets is enough to make Kraft Mac and Cheese look like broccoli. Pair the processing with fat, sodium, additives and in some cases, partially hydrogenated oils, and you have a household mealtime staple that is contributing to fatter children, kids with diabetes, behavioral issues and heart disease.

Look, we at Little Global Chefs get it. You guys are busy with a million things going on. And sometimes, you just need to get your kids fed without having to think about what goes on before the nugget hits the plate. Maybe you have picky eaters at home and the chicken nugget is the only saving grace. And to be totally honest, it wasn't until that long ago that I kicked the boxes of frozen nuggets out of our house. I was serving these to our kids once a week until I started researching for this article and realized how bad nuggets really are! But we are here to tell you there is a better way. Hear us out.

In our house, a big reason we quit nuggets is because we could not make amends with first, the idea of comminuted chicken and second, the idea of all the other crap in these nuggets. And while I sometimes feel like preparing nuggets, from the freezer, (I say "preparing" because let's face it, we're not making or cooking anything) is easy and gives me an extra 20 minutes to do things like laundry, it's really not that much of a time saver. Why? Because, unless you are eating these things for dinner too (which by the end of this article, you hopefully have not thrown up yet), then you're probably making a separate dinner for yourself. You don't even need to do that math here. Making two dinners already is inefficient! So here's an alternative for you that will take you 20 minutes, your kid can do most of the legwork, and you will have dinner for the entire family. And it is 100% breaded chicken and everyone will love it, I promise.

Homemade Chicken Tenders
Ingredients:
1 pound of organic chicken tenders (if you use chicken breast, slice them into strips)
1 cup of flour
1 ½ - 2 cups of panko, bread crumbs or ground up oatmeal
2 eggs plus a little water to make an egg wash
salt and pepper to taste
vegetable oil for pan frying