America might think of itself as a nation of beef eaters, but for the first time in over a century, Americans are eating more chicken than beef, Priceonomics reports. 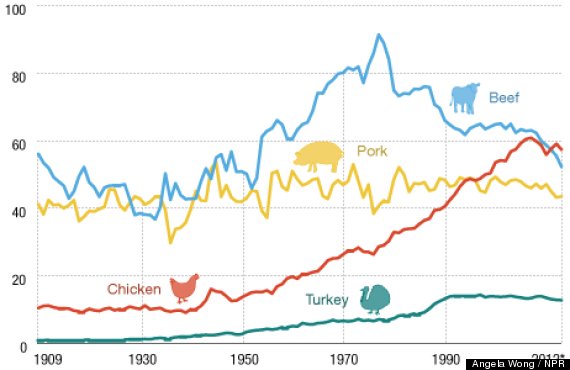 Beef consumption has been declining for the past decade, as consumers become more health conscious and choose leaner meats and vegetarian options. Red meat has been linked to heart disease and diabetes, and people perceive chicken, a white meat, to be a healthier option. The shift toward healthier dietary habits is only one piece of the puzzle, however. 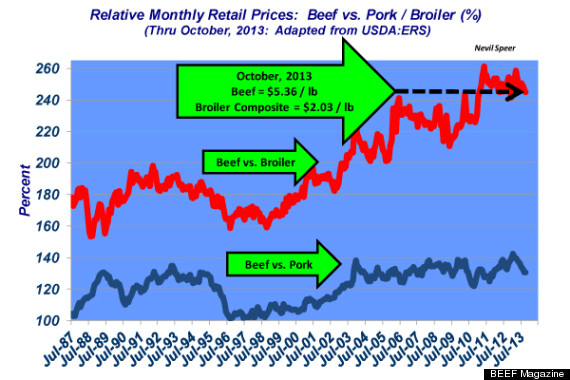 One cause of the price hike is that supply has decreased as a result of higher corn costs. While chicken feed consists of a variety of grains, corn and soybean meal, corn has become the dominant feed for cattle. According to the USDA, January 1, 2013 marked the "lowest Jan. 1 inventory of all cattle and calves since the 88.1 million on hand in 1952.” In the last two years, prices for cattle have risen by as much as 25 percent.

While American's are actually eating less meat overall -- from chicken to beef to pork -- the scale has finally tipped from greater consumption of beef to greater consumption of chicken. In 2012, Americans were eating almost 60 pounds of chicken per person each year. Chicken has become such a staple of the American diet that it's hard to imagine a time when we weren't eating much of it at all. The change has been dramatic, however. In the 1950s, Americans ate an average of 16 pounds of chicken per person every year. By 2000, that number grew to 53 pounds per year.

Fast food companies have been putting more chicken on their menus, (McDonald's is the second largest purchaser of chicken in the country), and restaurants saw a 12 percent jump in menu items including chicken from 2009 and 2012.

Beef is no longer what's for dinner.