While generally not considered newsworthy, chickens have recently been in the spotlight. First, chickens made the news around the world as orthodox Jewish communities practiced the ritual of Kapparot -- a Yom Kippur tradition of swinging a live chicken over "the sinner's" head and then slaughtering it. Chicken brutality in Fresno, California also made headlines, when close to 1,000 chickens were bludgeoned to death by four teenagers who broke into a farm.

"What a bad week to be a chicken," you might have thought.

Friends, it is always a bad week to be a chicken.

It is human nature to reel against heinous and purposeful cruelty. For instance, the story of a Brooklyn man who kicked a cat while being filmed recently went viral, as did the infamous Michael Vick dog fighting scandal. We Americans have little tolerance for deliberate cruelty, so the media attention received by the bludgeoned chickens is not surprising. But the elephant in the room in this story is this: our eating habits support cruelty that is every bit as savage and barbaric as bludgeoning animals with golf clubs.

One could certainly make an argument that those clubbed chickens met a fate no crueler than the one they were bound to face. Every year, 9 billion chickens suffer horrendously on factory farms so that we can eat them. "Broilers" are bred to grow so large and so fast that they can barely stand or move around -- doing so causes tremendous pain. During their short, painful lives, these birds live in cramped warehouses and never see daylight. At the end of their 47-day life, they are sent to the slaughterhouse where, among other horrors, millions are boiled alive every year as they miss the neck slicer and are submerged, completely conscious, into a water bath meant to remove their feathers. Sounds just as painful as being clubbed to death to me. 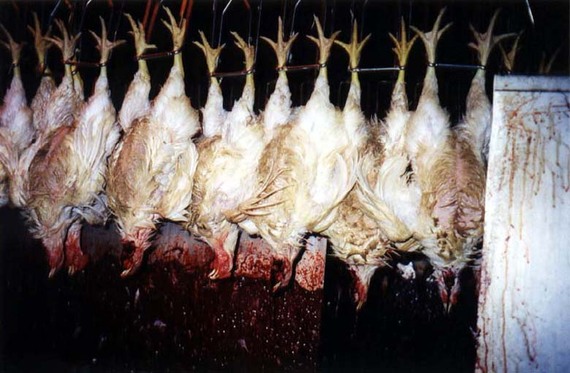 300 million hens in the U.S. are kept in "battery cages," tiny cages shared with up to 11 birds in which each bird gets less room than a standard 8.5x11 inch sheet of paper. Their beaks are seared off with a hot blade, without anesthetic, so that they cannot peck at each other in the confined space.

In the U.S. alone, over 8 million "dairy cows" live on factory farms. Dairy cows' tails and horns are cut off without anesthesia. Female cows also often suffer from a painful condition called mastitis, an infection that causes cows' udders to swell. On top of it all, cows are kept in a constant cycle of impregnation and birth in order to make milk, and suffer the emotional toll of losing their babies -- male calves become veal and females become dairy cows -- just moments after birth.

These are just two examples of the cruelty inflicted by our food choices. As we judge those who inflict intentional harm, I urge us to turn our judgement inward, too--to face the truth that that each of us, through the simple practice of eating, supports infinitely greater harm to an infinitely greater number of non-human animals than all of the animal cruelty stories that made their way into the news last week.

I believe we humans are compassionate. Many of us still don't know the harm we are causing. Take the first step towards compassionate living and visit CASanctuary.org to learn more about transitioning to a vegan diet. Better yet, if you're in the area, come to this year's Shindig, visit us any weekend May-November for a tour, or stay at our beautiful Homestead, now open year round!

Whether an animal meets his end with the blow of a club or the slice of blade, causing death is a cruel act. Chose compassion instead today. 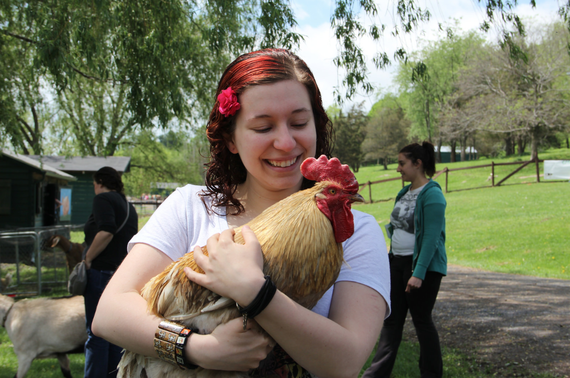