You wouldn't call me a sports fan by any stretch, but even I get into the Olympics. It isn't just any competition, after all. It is the rare international event where intense patriotism and starched uniforms signal the start of an inspiring spectacle -- not an aspiring hegemony. In the Olympics, we can be proud to be Americans and still be touched by individual stories and struggles that originated across the globe.

The Olympic experience reminds me of one of my first encounters with a global exhibition of sorts, albeit on a much smaller scale. As a kid, I was voluntold to help my mom run the "All Things India" booth at the annual International Festival in Columbus, Ohio, which usually entailed making hundreds of gulab jamuns and mysore pak sweets for festivalgoers to sample. No matter how foreign our home cooking might have seemed to my friends at school, the International Festival was a moment where people from all cultures could come together for a common purpose and with an open and curious mind. For my part, I now credit those festival afternoons full of kimchi, cheeses, baklava, sushi and hummus for my relatively diverse palate... and strong stomach.

Today, ethnic cuisine is everywhere. Even the regular grocery stores have entered the game with their "international food" aisles -- the culmination of an apparent effort to collapse the entire world's edible experiences into a dozen shelves. Now that I've caught Olympic fever, I've started wondering which products have legitimately earned their spot in this special aisle and which would get the gold in a food Olympics. Amidst the Kikkomans, Goyas and Pataks, there are a lot of foods competing for our attention. Usually, there are some curries-in-a-box, a few guilty pleasures like wafers and Nutella, and way too many tropical juices. But get past that and there are some solid, no-frills contenders -- grains, legumes and spices -- all of which have stood the test of time in lands far away. They may not be flashy, but they're durable, nutritious and versatile.

It's hard to choose an Olympic contender of any kind, but here it is. My pick for the coveted spot on the culinary Wheaties box is... the Garbanzo Bean. Known as "Chickpea" to her friends, Garbanzo has been around for a long time. She secured a spot in the American salad bar years ago, but that didn't really showcase her talents. Nonetheless, she's thrived on the international stage, feeding mouths across Europe, the Middle East and Asia. I first noticed Garbanzo when she partnered with Tahini to bring us hummus. But Garbanzo has also proven that she can hold her own in any curry. And when it comes to the triathlon of texture, flavor, and nutrition, Garbanzo is an all-around champion. Be it dried or boiled, whole or pureed, sweet or savory, Garbanzo can do it all.

I didn't know it at the time, but she even had something to do with those Indian desserts that I handed off to festival goers decades ago. I guess I must have enjoyed that experience after all, because I feel the need to relive it, at least virtually. So I invite you to experience the range that the Garbanzo Bean has to offer and try the recipes below for my tangy chickpea curry and quick version of mysore pak -- a rich, buttery dessert with a texture that's somewhere between fudge and shortbread (with the bonus of being gluten free!). Now before I run off to try chickpea chocolate chip cookies, I have to make mention of the Red Lentil, which has had a special place on my plate for years. Unfortunately, just like in the real Olympics, we run a strict scoring system where versatility and integrity count. Deep down, we all know that if the pressure were on, Red Lentil would just turn to mush. 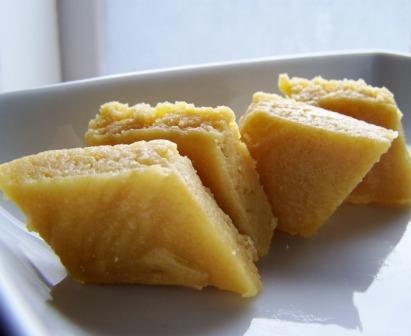 Steps
1. Melt the butter in a small pot over medium heat. Meanwhile, line an 8-inch square pan with wax paper.
2. Once the butter is completely melted and foaming (about 3 minutes), add the sugar and flour. Stir continuously and cook until the mixture is smooth like caramel (about 2-3 minutes).
3. Pour the hot mixture into the pan. Using a rubber spatula spread the mixture evenly so that it fills about half the pan. Allow the mysore pak to cool for at least 10 minutes in the refrigerator. Once it has set, cut it into diamonds or squares and carefully remove it from the pan. The mysore pak will be slightly crumbly and fragile, so it may help to invert the pan over a cutting board and/or peel the wax paper away as you cut the dessert. 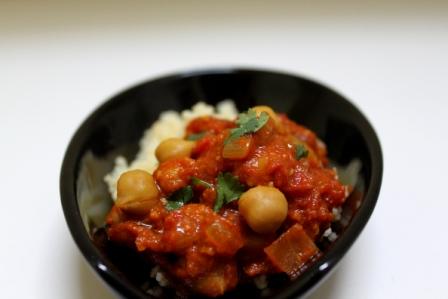 Steps
1. Heat the oil in a medium pot over medium heat. Chop the onion and add it to the hot oil along with the garlic and 1/4 teaspoon of salt. Toss and cook for about 5 minutes.
2. When the onion has started to brown, add in the ginger, tomato paste, and canned tomatoes. Stir and slightly mash the tomatoes with a fork or potato masher. Add the chickpeas, 1 teaspoon of salt, and the remaining ingredients except the cilantro. Thoroughly stir and cover.
3. Simmer on medium-low heat for about 10 minutes, stirring occasionally. Toss in the cilantro and serve over rice or couscous.