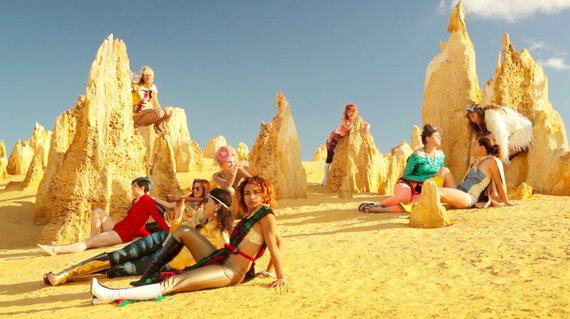 Long before Lady Gaga was visioning "ArtRaves" in galleries to promote her modern art-infused idea of what pop music should be and, perhaps, become, Munich-based fine art/musical ensemble Chicks on Speed had already realized it.

Founded in 1997 as a "multidisciplinary art group working in performance art, electronic dance music, collage graphics, textile design and fashion", Chicks on Speed first made a name for themselves during the Electroclash takeover of the early 2000s -- a genre they would become synonymous with over the years which followed.

On June 27th, Chicks on Speed is back with Artstravaganza, a multimedia album, film and app project which was created by core band members Melissa Logan and Alex Murray-Leslie in collaboration with "leading contemporary artists, activists, producers and a princess", including: Julian Assange, Yoko Ono, Peter Weibel, Francesca Thyssen-Bornemisza, Christopher Just, Oliver Horton, Angie Seah, Anat Ben-David and a whole slew of others.

I caught up with Melissa and Alex this week to get their take on Artstravaganza, the state of the music "industry", and what it was like to create with that incredible list of co-conspirators.

Watch Utopia, the first single from Artstravaganza, then check out my interview with Chicks on Speed below.

Logan Lynn: Thanks for chatting with me today, you two! You have Yoko Ono and Julian Assange as two of the many diverse collaborators on your new record. How does this blend of activists, musicians, producers, artists and royalty work together to create?

Alex Murray-Leslie: There's a mutual appreciation between all of us on the level of risk-taking and experimentation into new unknown areas of both creative / political territories. We wanted to harness this radical creative energy of our collaborators in these multidisciplinary mediums -- inside an audio visual explosion, reflected in the formats of the traditional analogue album and digitally in the series of public musical instrument APP's.

Melissa Logan: We spent a few years working on this album, and the creative process is integrated into the other facts of the Chicks Project. For example, we built an installation for Contour, Biennale of the moving image in Belgium called The Endless Song, which was a grouping of machines. We connected Dark Energy synthesizers with our custom-built cigar box synths and delay tape machines. They were echoing and sequencing audio in an always changing way. Recordings of this installation were the base that the song of the same title which has some vocal studio recordings layered on top for the album version. Already at this early stage we were thinking of what evolutionary utopia is. The Endless Song is a statement of success. We have reached Utopia. The machines that Kraftwerk shocked the world with from 1979 onwards with the ecstatic chords and the delay tape inventions and studies by Paulin Olivarios from the 1950's onward has engendered a sort of helper/pet like relationship to our machines.

Lynn: Is that where the idea for the album's first single, Utopia, comes from? 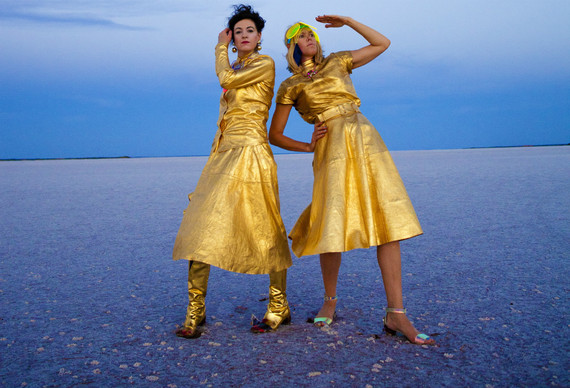 Logan: The song is part of a lecture we hijacked from a performance lecture YouTube video by Tuomas Toivonen, an architect in Helsinki. His video is very nice, but we expanded on "Utopia" as a vision that is personal. It can be positive, but Utopia is an easy way to manipulate humans as well. It is a many layered phenomena which we believe to be closely connected to freedom, lack of it, or working towards new freedoms. We recommend observing the clash of diverse Utopian ideas and the contradictions of personal gain, survival, and comfort. Where does luxury begin and decadence take over -- or an incapability or laziness to dream of something different than luxury. Now luxury is just a matter of credit card debt. I think this is great progress; the immaterial nature of the world now, the air B&B culture, share culture.

Murray-Leslie: Referencing Douglas Coupland, who had something to do with the album naming, "We now inhabit a decidedly post-Koonsian world where, as we know, if anybody can be an artist, then anything can be art. Everyone is creative. Everyone makes art. ART, art, art! We're entering a sort of post-era where the driving force of everyday life is the continuing pursuit of what writer William Gibson calls 'curated novelty'. And even in this new realm, non-art, we know, is art by default: and yet there is something causing unease amid this artstravaganza. There is one sabot to be thrown into the machinery of the curated twenty-first century lifestyle, and this is craft."

Lynn: Oh god, that quote is good. How has it been for you all to navigate these 15 years of being a band? Any thoughts on the current state of the music industry you'd like to share?

Logan: The business side of music has always been a small step away from mafia criminal circles. Live concerts and festivals are often treated like cash crops. The amazingly fast shift of monolithic companies to dubiously nontransparent 'start ups' in publishing & streaming is fascinating. The development of the apps are our answer to this, we need to release music in our own way because as an artist the pie is cut in too many pieces.

Murray-Leslie: The business has crashed and is being rebuilt by artists and musicians. Finally artists can be authors and profit financially from their output through educating themselves, without losing almost all of the pie to middle people. It's all about the live experience, coupled with great artists inventions to go with their music. It's a nice time to be a musician, artist, media freak, coder, ALL.

Lynn: Agreed. Tell me more about the apps. Where did this multimedia release idea come from?

Murray-Leslie: Artstravaganza is a concept album in the vein of 70s concept rock albums, except we've twisted this notion of concept album to embody ideas of invention and new forms of creativity in the digital frontier -- not just thematically, but through the development of our musical instruments for iPads -- new interfaces for musical expression that accompany the album and will be available on the itunes store. Our aim was to make our art become a multi-sensory experience in which the spectator becomes an active participant. Through the process of participation, the spectator in essence becomes the artist, turning the tables of the viewer as a consumer to a "prosumer" (producer/consumer) during our live renditions of the Artstravaganza album at concerts and in exhibition spaces.

Lynn: Is the Chicks on Speed project a vehicle for political expression? As a listener, it feels...charged.

Murray-Leslie: Pop is a powerful medium. Chicks on Speed like to use that, taking radical ideas discussing activism and feminism, morphing them into lyrical form and spreading the word through something that sounds soft and happy, but is actually hard for people to take. I think this way of spreading new culture works. People subliminally take the ideas on board and spread them further and further 'til the big picture of the world changes, too.

Lynn: I know you have a bunch of upcoming events and shows in Europe. Will there be a North American tour?

Logan: We have toured the U.S. a few times and see no reason to repeat -- but if Marina Abramovich is ready to launch or celebrate Mr. Rem Koolhaas breaking ground we would consider performing at MAI in Hudson. There must be other locations which are great. We are interested in special locations & contexts, and are very excited by developing more Objektinstruments (wearable sound pieces), but these require a relatively complex technical setup. 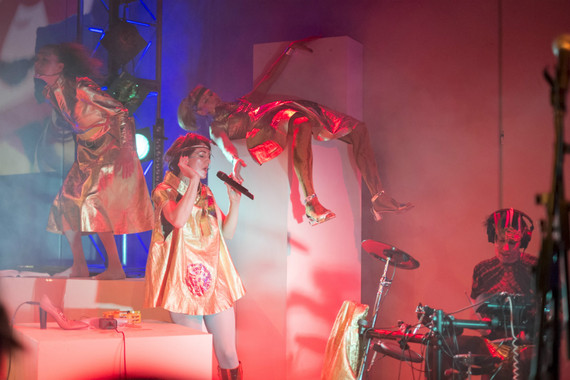 Lynn: Who are some of your favorite artists or people you would like to work with who aren't already on the new record?

Murray-Leslie: Hannah Hoch, one of the first Dadaists who pushed boundaries and pioneered collage as a form of experimental and political art. Lygia Clarke and her multi sensorial object inventions for relational art experiments. She's having a major retrospective at MoMA NYC this year. Sonia Delaunay, for her approach to making fashion, textiles, paintings and objects that become part of a bigger, whole work or art -- something that's very important in the work of Chicks On Speed. We never just think about one single facet, but all in connection to the other. I love the notion of a song becoming textile, a dress, movement, action on stage, in the streets and on museum roof tops. I'd like to work with Mick harvey, too. We have something in the pipeline.

Lynn: How has your work changed since the early days of Electroclash?

Murray-Leslie: It's now no longer just about Melissa and I and our close collaborators, but our audiences and how they interact with our art and music, becoming co-authors and what these outcomes can look and sound like. The APP's and our research into media arts and new interfaces for musical expression has added realtime process of creation. It's about a bigger picture. This all-encompassing artwork idea was always there since the beginning of our arts research but now we can actually make these ambitious projects we'd dreamt of 17 years ago into our own physical utopias. We now think about bigger impossible projects. Tthe creative process involves thinking laterally along many blurred lines and intersections, including science, cybernetics, kinetics, clusters of ideas, genetics, texture vs. form, fuzzy boarders, fractals, human computer interaction, gender, composing color, semiotics, landscapes, controversial politics, interfering patterns, noise, fashion, objects and the body, music notation, movement, pop music, hats, shoes, handbags, microphones, self-organizing systems, chaos, tools of expression, shape shifting, shifting focal points, what to focus on next, freedom of creative expression.

Murray-Leslie: On a musical level, we used networked improvisation to seek out our compositional language, this organic process of inter-networked-jamming with musicians in different countries via the web, informed the project and helped to create a fine balance between freedom and a stylized, consistent musical language. Latency has a great influence on a score, when you're jamming thousands of miles away. 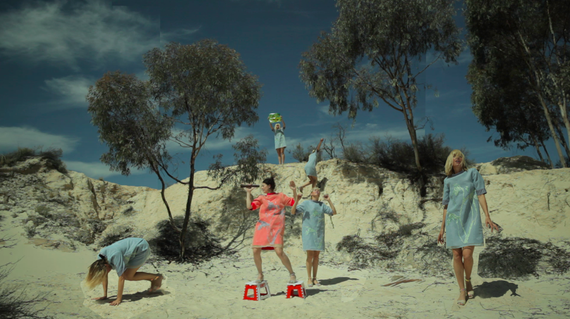 For more on Chicks on Speed, visit their website.