Turbo the Chihuahua was born without his two front legs, but he doesn't seem to notice. The feisty little dog won't let anything hold him back.

The two-legged pup was brought to The Downtown Veterinarian in Indianapolis, Indiana, about two weeks ago, Today.com reported. Turbo's owners brought him to the clinic because when he was 4 weeks old his littermates made it difficult for the disabled pooch to get any food. At 1 month old, he weighed just 10 ounces.

After visiting other vets who said there was nothing they could do for him, his owners were distraught.

"The couple was besides themselves," Amy Birk, the practice manager of The Downtown Veterinarian told the outlet. "They didn't want the dog to be euthanized." 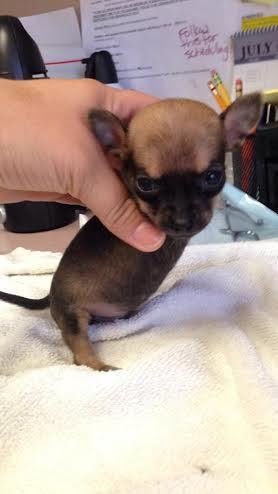 The owners agreed to sign the puppy over to the staff so that he could get the care that he needed.

"A small dog can do well with a cart," Birk told ABC 7. "So, unless he had another medical condition, there was no way we were putting him to sleep."

Turbo began to eat regularly and gain weight, and the staff set about creating a cart for him to get around more easily. Dogs can't be fitted for a regular cart until they are 6 months old, so they were forced to get creative.

At first, according to Fox 59, the staff assembled a device using parts from a Fisher Price helicopter. 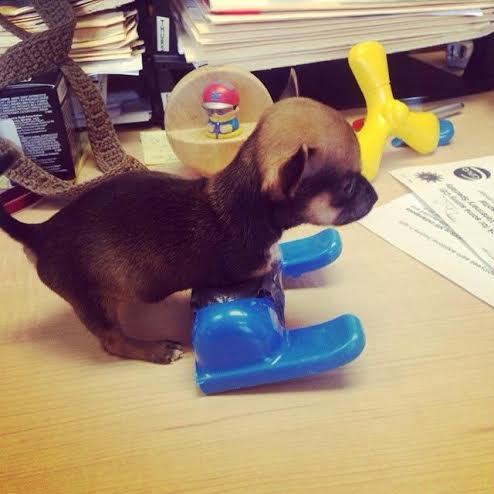 Next, they made this one below out of straws but it proved too flimsy. His current cart is made of pipes from a toy welding kit, but the staff fears he will grow out of it soon.

Currently, the veterinary clinic is raising money for a cart specially designed for the little dog. The starting price is $200.

But Turbo, now 6 weeks old and weighting in at less than 1 pound, isn't concerned with his lack of legs. The spunky Chihuahua spends his days doing physical therapy to strengthen his back legs at the practice, and is going home at night with veterinary technician Ashley Looper who has decided to adopt him.

“He definitely has a different personality because he is handicapped," Looper told the outlet. "He is just spunkier. In the morning, he is alert and ready to go and you see him walk and he is just happy!”

The Downtown Veterinarian is accepting donations for Turbo's special cart at their office and by phone. To keep up with Turbo and his progress, visit his Facebook page or Instagram account.