AMHARA REGION, Ethiopia -- Yeshi-Alem drapes a small, woven book bag over her left shoulder for the short walk to school where students sit three to a desk in a classroom made of mud and straw and where the only light is a few rays of sunshine sneaking through a doorway.

Yeshi-Alem settles in a front-row desk in the class of 55 boys and girls. Being here is a major accomplishment, one that has transformed the 18-year-old from a self-described shy girl into an outspoken proponent of girls' education, access to birth control and girls' right to marry when and whom they want.

Like many of the girls I spent time with in Ethiopia's Amhara region earlier this year, Yeshi-Alem knows about not having such choices. She was forced to marry when she was 10-years-old. A few years later, she gave birth to a boy and dropped out of school. 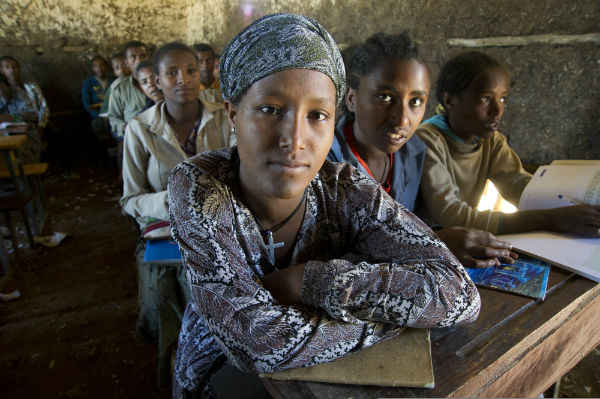 Yeshi-Alem's experience is all too common. From Nepal and Nicaragua to Yemen and Uganda, an estimated 10 million girls worldwide are married each year before their 18th birthday. Driven largely by poverty and gender inequality, the practice of child marriage persists despite laws against it in many countries, including Ethiopia.

In the Amhara region of northern Ethiopia, Yeshi-Alem is one of hundreds of thousands of child brides who are married, in often secret ceremonies, to men eight or more years older. Most don't learn about their wedding until a week or days before. Many are isolated in remote villages, stuck in a life often defined by household chores and tending to their husbands' and in-laws' needs.

Wives and mothers, but not yet adults, these girls remain largely invisible to others in their community -- and invisible to the world.

However, the International Center for Research on Women (ICRW) is helping bring girls like Yeshi-Alem out of the shadows through an innovative program called TESFA, which means "hope" in Amharic. Launched in 2010 with funding from the Nike Foundation, the joint CARE-ICRW program provides 5,000 married girls -- most are between the ages of 14 and 19 -- with information about sexual and reproductive health, saving and investing money and tips on how to communicate effectively with others around health and financial matters. What makes TESFA unique is that it's one of the few efforts globally that focuses on the overlooked population of married girls, which numbers about 60 million worldwide.

Critically, TESFA aims to empower child brides to advocate for themselves within the confines of a life they did not choose. By doing so, these girls are likely to have a better chance of not only growing into healthy, productive adults, but also mothers who one day may stand against their own daughters being forced to marry.

In many developing nations, girls are often valued less than boys, and marrying daughters early can be viewed as a way to ease a family's financial burden. Child marriage in some countries can mean a small dowry or a gift of cattle or land to farm from the future husband's family. And as is often the case worldwide, girls' virginity holds a high price -- many parents believe early marriage protects their daughters from sexual violence and "dishonor."

But a girl's childhood also abruptly ends with marriage. Most child brides drop out of school, increasing their chances of remaining trapped in an inter-generational cycle of poverty. Meanwhile, most girl wives have little power in their marriage including negotiating safe sex practices with their husbands, which puts them at an increased risk of complications from early pregnancy and childbirth.

Many of the girls I met in Amhara didn't know much about birth control, let alone how pregnancy happens. Most described painful, unwanted first sexual experiences with their husband. Some girls said they realized they were pregnant only when an adult explained why something was moving in their belly.

For Yeshi-Alem and others, being involved in TESFA seems to be creating a turning point. Most notably, ICRW has found that girls have become more self confident. That's true for Yeshi-Alem, who said she couldn't even look at people before the program. When we talked outside one day in the grass, she met my gaze, chatted nonstop and was quick to pose for a camera.

"TESFA project," she told me, "has opened my eyes."

She said she feels different these days, like she has a kernel of control over her path. It's a small shift, but a powerful one that could help redirect the course of Yeshi-Alem's life -- and that of other married girls in this corner of Amhara.

Indeed, armed with new information, skills and confidence, Yeshi-Alem convinced her husband to let her use birth control as well as return to school.

"We don't have land, so we can't afford to clothe two kids, feed two kids and send two kids to school," she told him. And then, she said to me with a wry grin, she suggested that she'd only have another child if her husband would take care of their firstborn.

He would have none if it, Yeshi-Alem told me, laughing. It was a big win for her.

Watch the video "Voices from Ethiopia" and help ICRW reach 10,000 views by Giving Tuesday on Nov. 27.

This blog is part of our #GivingTuesday series, produced by The Huffington Post and the teams at InterAction, 92nd Street Y,United Nations Foundation, and others. Following Black Friday and Cyber Monday, #GivingTuesday -- which takes place for the first time on Tuesday, November 27 -- is a movement intended to open the holiday season on a philanthropic note. Go to www.givingtuesday.org to learn more and get involved.