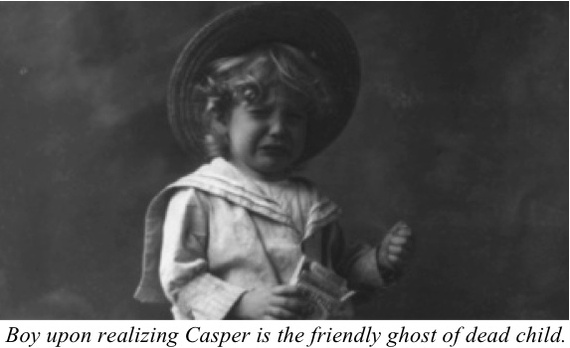 A six-year-old boy was diagnosed as permanently traumatized after realizing that Casper is the friendly ghost of a dead child. The attending physician told reporters, "You can get over the death of a pet or grandparent, but this? Never."

"I partially blame myself for giving him all those deductive reasoning test prep questions," his mother shared. "He put it together in two seconds, 'If ghosts are dead-people spirits, and Casper is a kid, then Casper the Friendly Ghost is a dead kid.' He's been rocking on the floor in the fetal position ever since," she dissolved into sobs.

His father stepped in, "This led to a flood of illuminations about other childhood fallacies -- Santa Claus, the tooth-fairy, every time we said, 'good job' -- his whole world crashed down around him. Whoever created this character is a sick sick person who must be stopped."

The boy's parents said they plan to take legal action in an effort to spare other families their heartbreaking anguish.

Image:"Child Seated on Crate," circa 1896, from the Unites States Library of Congress, Public Domain via Wikimedia Commons