What do chocolate pumps have to do with solving world hunger? Quite a bit, if you ask the Akshaya Patra Foundation. The Balgdon Pump, initially designed to pump liquid chocolate, helps complete the herculean task of preparing fresh nutritious meals for over 1.3 million impoverished children daily in government-run schools across ten Indian states. For many children, this is their only complete meal of the day, which gives them an incentive to come to school, stay in school, and focus on learning.

The Akshaya Patra Foundation, a public-private partnership, is the largest NGO-run midday meal program in the world. It utilizes innovative technology, smart engineering and good management to reach and continue to grow its current levels of service delivery and keep costs low. It costs them just $15 to feed each child for an entire academic school year.

Madhu Pandit, a graduate of the premier Indian Institute of Technology in Bombay, founded Akshaya Patra with a group of dedicated social entrepreneurs who were also leaders in the Indian IT, engineering and business communities. This group of individuals recognized the seemingly insurmountable problem of childhood hunger and its effects on access to education, and on India's -- and ultimately the world's -- economic and social development. Fortunately, the founders possessed the engineering skills needed to design equipment and layout for a mechanized kitchen which can efficiently cook nutritious meals for large numbers of children at a low-cost.

Their school meal program started modestly, feeding 1,500 underprivileged children in five government schools in Bangalore. A month after the program began, teachers started to report increased attendance by students, and letters started pouring in from neighboring schools asking to be included. This was a defining moment for Pandit as he realized just what one complete meal a day means to children and their families. He saw this as an important strategic intervention in education that unlocks the vicious and perpetual cycle of poverty.

Technical Innovation in a Commercial Kitchen 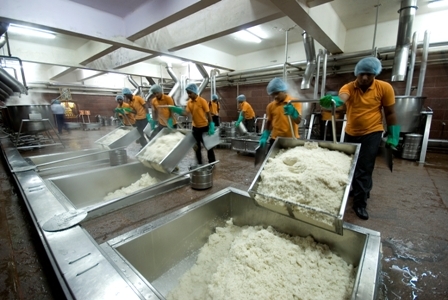 While the Balgdon chocolate pump is now far removed from the chocolate industry, its function -- to move very viscous fluid -- remains the same. Akshaya Patra ingeniously uses it to pump the "ganji" (excess water from cooking rice) out of the rice cauldrons, where it is then recycled for use in bio-culture or vehicle washing water. This is not the only piece of innovative technology they have become to be known for.

The hallmark of Akshaya Patra's program is its centralized kitchen facilities, which have been designed and engineered to optimize quality and minimize cost, time and labor. These fully automated kitchens can prepare 185,000 meals in less than five hours by utilizing gravity flow mechanisms to minimize human handling of food, mechanized high-speed cutting of vegetables and conveyor belts for easy transportation. Large stainless steel cauldrons with easy-tilt mechanisms prepare 1,200 liters of lentils in two hours and a specially designed roti-making machine cooks up 40,000 rotis (flat whole wheat bread) in one hour. Steam is used as a source of cooking, which accelerates the cooking process, retains nutrients, and is cost-effective and clean. To date, six of the Akshaya Patra kitchens have received FSMS ISO 22000:2005 certification -- a first of its kind achievement for an NGO.

Total Efficiency from Kitchen to School

After the food leaves the kitchen, the Akshaya Patra meal delivery system involves well-coordinated precision logistics using custom designed vehicles that quickly and safely deliver cooked food to schools according to a strict schedule, with optimal storage and minimal spillage. In an effort to minimize fuel consumption and cost, they have developed route simulation software. A pilot run of this tool reduced the number of routes in the Bangalore South kitchen by 10 percent, and experts estimate that an optimization opportunity of up to 15 percent exists if the tool is implemented across all units. Efficiencies in logistics operations were improved by making use of GPS technology in meal delivery vehicles and automating attendance data collection from the schools using IVRS hand-held devices.

Given the size of Akshaya Patra's operation, a strain exists on the local natural resources. India, having 18 percent of the world's population on 2.4 percent of the world's total area, has experienced environmental degradation such as water shortages, soil exhaustion and erosion, deforestation, and air and water pollution. In a bid to reverse this trend, Akshaya Patra has adopted several environmentally friendly practices. Six of the twenty one kitchen locations use Briquette run boilers, fueled by groundnut husk or rice bran instead of diesel. Rain water is harvested and re-routed into a pond, recharging bore-wells and reducing dependency on corporation water. Smokeless stoves are being piloted in their Bangalore location. A mini-fan, powered by rechargeable batteries and controlled by a regulator, blows air to fan the flames. This has helped to reduce fuel cost by 50 percent.

Despite India's booming economic growth, the country is still home to hundreds of millions of people suffering from the dual tragedies of malnutrition and a lack of education. UNICEF estimates that 57 million Indian children are malnourished, impairing their cognitive and social development. The 2011 Global Hunger Index, a report published by the International Food Policy Research Institute, placed India at 67 out of 81 developing countries in hunger. Unless these serious problems are addressed, large numbers of India's children will remain unhealthy and uneducated. This poses a serious obstacle to India's ability to participate effectively in the world economy. It is estimated that child malnutrition is responsible for 22 percent of the country's burden of disease, affecting productivity, income and consumption. Reduced productivity costs India's economy approximately $2.5 billion annually. With a potential labor and consumer force of one billion people, this can have serious implications for the global economy.

A wholesome mid-day meal, served in schools, helps break the cycle of poverty and helps children to become productive global citizens. India's expanding economy, in this global environment, presents extraordinary opportunities for large numbers of young people, but those who remain uneducated, unskilled and unhealthy will have poor prospects. Akshaya Patra's technology applications benefit humanity by liberating children from hunger and a lack of education. They are investing in a better world by protecting our future. This is a cause I can get behind.