Where in the world are children forced to work in dangerous conditions, often toiling at the expense of receiving education and basic freedoms?

The risk analysis firm Maplecroft released a report showing that worsening global security and the economic crisis have increased the risk of child labor violations in several countries. Maplecroft studied child labor conditions in 197 countries and concluded that nearly 40% of those countries showed "extreme risk" of violations.

The International Labor Organization (ILO) defines child labor as "work that deprives children of their childhood, their potential and their dignity, and that is harmful to physical and mental development." The ILO argues that not all work carried out by children is harmful or detrimental, but the organization condemns forms of labor that are physically, socially or morally dangerous and harmful to children or interfere with their education and development.

UNICEF, the United Nations Children's Fund, estimates that 158 million children between the ages of 5 and 14 are engaged in child labor, particularly in Sub-Saharan Africa. According to the organization, more than one third of children in Sub-Saharan Africa work, most of them in the agricultural sector.

Maplecroft notes a strong link between household poverty and child labor. When the poor's children are kept out of school to work, they have limited prospects for upward social mobility. This creates a cycle of poverty for generations.

6 countries out of Maplecroft's list of worst child labor offenders are located in Africa. Tens of thousands of children in Congo are employed in the mining sector in often "hazardous conditions," the report shows. In countries hit by conflict such as Sudan, Chad and Ethiopia, the abduction of children and forced labor continue to pose extreme risks.

Below, see which countries ranked worst. Scroll down for the top 10 offenders.

Click here to see full version of the map below. 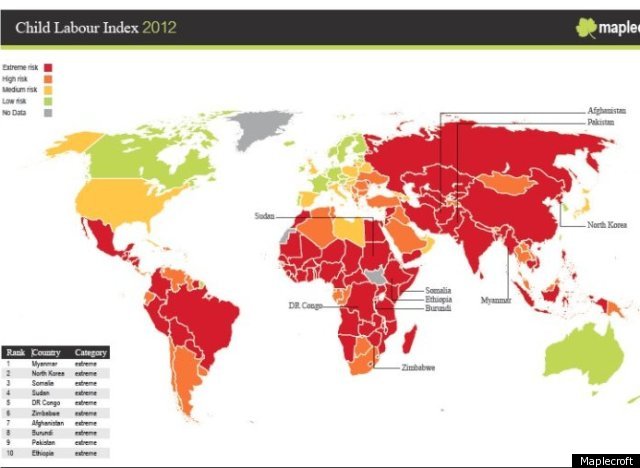