Nearly half a billion children are at risk of "devastating and irreversible" damage from malnutrition, including stunted growth and undeveloped brains, according to a new report released by Save the Children. This "hidden crisis" kills more than 300 children every hour of every day and affects one in four children worldwide, according to the report.

Chronic childhood malnutrition has been called a "silent killer," as it is often not listed as a cause of death and does not benefit from as much attention as high-profile campaigns targeting malaria or HIV/AIDS.

Soaring food prices have left children particularly vulnerable. According to the Press Association, one-third of parents reported that their children did not have enough to eat, and one-sixth said that their children skipped school in favor of work. Chief executive of Save the Children Justin Forsyth outlined the gravity of the situation:

"Every hour of every day, 300 children die because of malnutrition, often simply because they don't have access to the basic, nutritious foods that we take for granted in rich countries," he said.

The report from Save the Children lists a number of trends that have contributed to the problem, including "climate change, volatile food prices, economic uncertainty, the global health worker shortage and demographic shifts."

Global hunger has fallen markedly over the last two decades, but the 2011 Global Hunger Index found that six countries have higher rates of hunger today than two decades ago. Five of those countries are in Africa. The other is North Korea.

The 2011 Global Hunger Index said that Congo, Burundi, Comoros, Swaziland and Ivory Coast have higher degrees of hunger today than in 1990. Kuwait, Turkey, Malaysia and Mexico have made the biggest gains against hunger.

Karin Lapping, a senior director of nutrition for Save the Children, said many Asian countries have made strides against hunger because of an explicit focus on reducing chronic malnutrition, but that many African countries have not made that same commitment and have fallen victims to predictable cycles of drought and famine.

"When we look at successful examples in Asia like Bangladesh, they have a national nutrition program," Lapping said. "We haven't seen that to be the case in many nations in Africa."

Ethiopia is one exception, she said, because of successful nutrition programs. But, she said, in many other regions "progress has been undercut by cyclical emergencies like what we're seeing now in the Sahel," a belt across northern Africa that experiencing a food crisis. Lapping said many African countries need greater political commitments from their governments and more external aid.

Malnutrition numbers in Africa remain startling. The report said that nearly two in five children on the continent -- 60 million children -- are stunted. The average yield of staple cereals is a third less than in Asia.

The British government estimates that between 50,000 and 100,000 people died during a famine in Somalia last year. Most of those killed were children.

Chronic hunger leaves children vulnerable to starvation when food crises hit, but also leaves them vulnerable to death by diarrhea, pneumonia and malaria even in better times. 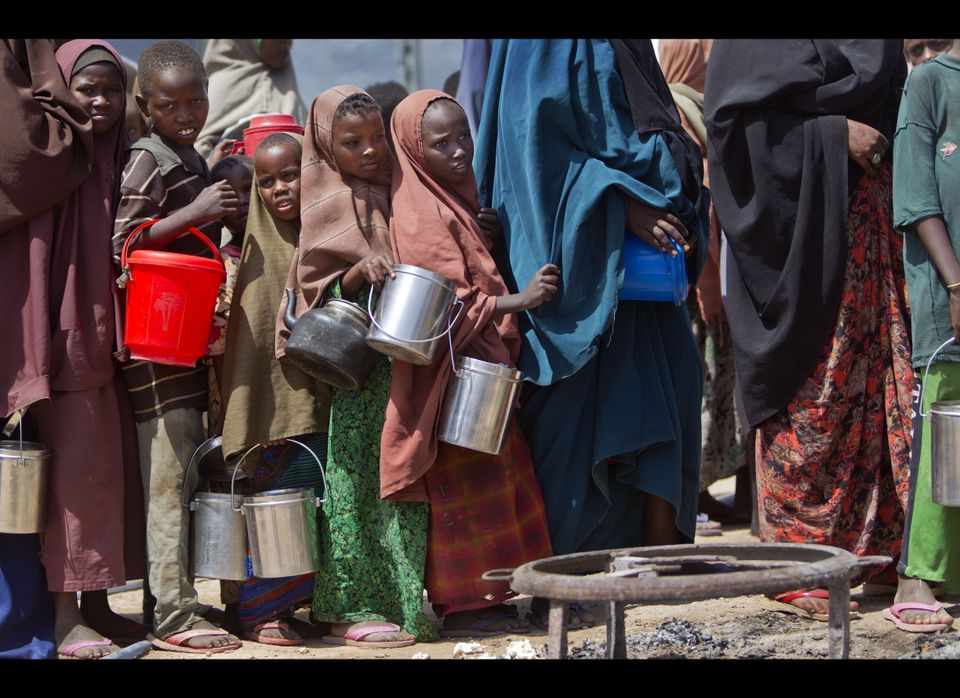 1 / 9
In this Thursday, Jan. 19, 2012 file photo, children line up to receive a meal at a food distribution center for those displaced by last year's famine or by conflict, in Mogadishu, Somalia. A new report by Save the Children released Wednesday, Feb. 15, 2011 says that despite advances against hunger around the world, chronic childhood malnutrition remains largely overlooked and almost a half billion children are at risk of permanent damage over the next 15 years. (AP Photo/Ben Curtis, File)
AP