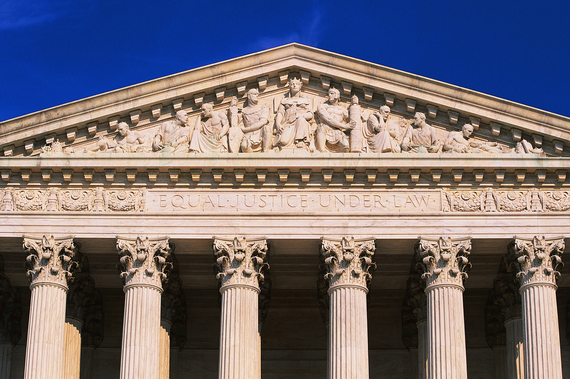 Our client Amy was sexually abused as a young girl in order to produce child pornography. When she was 17, she learned that images of her abuse were being trafficked on the Internet, in effect repeating the original wrongs, for she knew that her humiliation and hurt would be renewed well into the future as thousands of additional wrongdoers witnessed those crimes.

The defendant in this case, Doyle Randall Paroline, pleaded guilty in federal court to possessing images of child pornography which included Amy, in violation of the federal child pornography laws. Amy sought restitution under 18 U.S.C.§ 2259, the Mandatory Restitution for Sexual Exploitation of Children Act of 1994, for lost income and future treatment and counseling costs.

After several years of litigation in the lower courts and the Fifth Circuit Court of Appeals, the case was accepted by the Supreme Court on June 27, 2013. Oral argument occurred on January 22, 2014.

Amy, whose story was featured last year in the New York Times Magazine and popularized earlier this month by Law and Order SVU as Downloaded Child (watch this clip ironically entitled Restitution at Last which apparently did not influence the justices in our case), argued that joint and several liability would hold not just Paroline responsible, but every other defendant who trades and collects her child sex abuse images.

This legal theory makes every defendant responsible for the full amount of Amy’s losses and shifts the burden on collection from the innocent victim to guilty defendants who are, after all, benefiting and willingly participating online in Amy’s continued sexual abuse.

Once Amy collects the full amount of her losses, she cannot collect any more restitution. The law specifically provides that the Court must set the amount any one defendant pays based on that defendant’s financial resources, thereby insuring that no defendant bears a disproportionate burden. Under Amy’s theory, most defendants would pay the equivalent of child support every month until Amy is made whole. After that, restitution would end and if any defendant felt their obligation was unfair, they could seek contribution from other defendants -- like Amy has been doing for six years now -- to even things out.

In a split 5-3-1 decision, the Court rejected Amy’s legal theory with all three sides calling for Congressional reform of the law. The majority decision, which was written by Justice Kennedy and joined by Justices Ginsburg, Breyer, Alito, and Kagan, recognized the terrible harm caused by child pornography, but created a regime which will be hard to implement in the lower courts and lead to years, if not decades, of additional litigation about the proper amount of restitution in any given case.

Critically for victims, the Court acknowledged in the strongest possible terms, the devastating nature of this pernicious crime:

The full extent of this victim’s suffering is hard to grasp. Her abuser took away her childhood, her self-conception of her innocence, and her freedom from the kind of nightmares and memories that most others will never know. These crimes were compounded by the distribution of images of her abuser’s horrific acts, which meant the wrongs inflicted upon her were in effect repeated; for she knew her humiliation and hurt were and would be renewed into the future as an ever-increasing number of wrongdoers witnessed the crimes committed against her.

The majority explained that

there can be no question that it would produce anomalous results to say that no restitution is appropriate in these circumstances. It is common ground that the victim suffers continuing and grievous harm as a result of her knowledge that a large, indeterminate number of individuals have viewed and will in the future view images of the sexual abuse she endured.…Harms of this sort are a major reason why child pornography is outlawed.…In a sense, every viewing of child pornography is a repetition of the victim’s abuse.

Ultimately, however, the Court rejected Amy’s solution of joint and several liability with contribution, and adopted an almost nonsensical standard for determining restitution:

The majority urged the lower courts to “use discretion and sound judgment” without resorting to a “precise mathematical inquiry.”

In other words, the majority decision basically accepted the Government’s rejoinder at oral argument that there should be a “fudge factor” when fixing compensation for victim’s of child pornography, while adopting “rough guideposts” for “determining an amount that fits the offense.”

The dissent, which was written by Chief Justice Roberts and joined by Justices Scalia and Thomas, declared that under the majority’s proposal “Amy will be stuck litigating for years to come” and that the best she can hope to obtain is “piecemeal restitution” and “trivial restitution orders.”

“Congress set up a restitution system sure to fail in cases like this one” which “effectively precluded restitution in most cases involving possession or distribution of child pornography.” When it comes to Paroline’s crime -- possession of two of Amy’s images -- “it is not possible to do anything more than pick an arbitrary number for that amount.”

The Court’s decision today means that Amy will not go home with nothing. But it would be a mistake for that salutary outcome to lead readers to conclude that Amy has prevailed or that Congress has done justice for victims of child pornography. The statute as written allows no recovery; we ought to say so, and give Congress a chance to fix it.

Sotomayor, Congress, and Fixing the Law

My next post will review Justice Sotomayor’s dissent and explain how her ideas will influence what happens next as Congress begins fixing the child pornography restitution statute.