The New Year is as much about looking backward as ahead. After all, the past holds perhaps the most abiding lessons. And so as I reflected recently on 2011, chief among the challenges I contemplated were the pulverizing body blows of natural disasters throughout the year, a series of devastating events that summoned our fortitude, strained our resolve and tested our capacity to empathize with victims thousands of miles away.

While we confronted our own share of hurricanes and tornadoes here in the United States (12 weather-related disasters that resulted in a record $1 billion in losses), the wrath that Mother Nature inflicted around the world -- from the colossal earthquake in Japan to the unprecedented flooding in Australia -- seemed especially cruel and destructive, particularly in countries that are least prepared to deal with such catastrophes: the massive drought in East Africa, the incessant floods in Thailand, the year-end typhoon in the Philippines.

Last summer, I had the unenviable opportunity to witness firsthand the ravages wrought by the drought in Africa's horn. The parched land in Kenya -- as in Somalia, Ethiopia and elsewhere in the region -- was powdery dry. Unable to sustain crops and livestock, the arid land consigned millions of people to a hopeless odyssey, which for many ended in sweeping tragedy. Among the victims: 30,000 children.

A continent away, the weather delivered a different kind of brutality with ironic though equally ruinous force. Unceasing rains inundated much of Thailand, sending its major rivers in the north over their banks, deluging its densely populated capital in the south and inflicting as much as $45 billion in damages. Historically, Thailand's agricultural conditions make it difficult for families to earn enough money to meet their children's basic needs. The floods compounded those challenges, putting much of the country under as much as 10 feet of water and swamping farmland as to make it unfit for cultivation.

The year ended with a massive typhoon in the Philippines. Tropical Storm Washi overwhelmed the eastern part of the archipelago, killing close to 1,200 people and rendering more than a half a million homeless. Poor water, sanitation and hygiene have posed growing health concerns, particularly to children who are most vulnerable to the outbreak of disease. 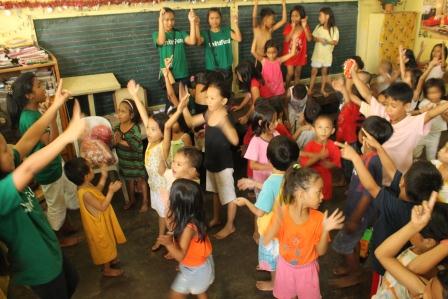 In the Philippines, classrooms are turned into child-centered spaces to provide psychosocial support and food to children after Typhoon Washi.

ChildFund has been working within all three of these countries for decades, giving children the best opportunity to continue their education and helping families develop skills so that they may reach self-sufficiency. Based on our experience, we know that when drought, floods and typhoons descend, it is the children who are the most affected. Not only must they confront the obvious threats to their survival, but beyond the immediate danger, they also must deal with cataclysmic events they cannot comprehend, especially when the cadence of their routines has been disrupted and the comfort of their familiar surroundings removed.

In the wake of disasters, our focus is twofold. First, for the children who have been forced from their homes, we create child-centered spaces, places where children can be fed and protected and where they can engage in activities befitting children. These spaces give them the sense that they are safe and enable parents to concentrate on other pressing demands.

Our second emphasis is on the schools. Amid the African drought, we sought to keep the schools open, even during the summer. Schools provided a stable environment and were often the only place where children received a meal. In the Philippines, although the typhoon hit during their winter break, we worked to reopen the schools on time -- and much to the children's delight. If we did not already appreciate the value these children place on their education, we need only look at the photos of young Filipino students braving harrowing bridges and washed-out roads, determined to make it to their classrooms.

The past year's natural disasters also served to accentuate the complex adversity of poverty throughout the year. The fact is, the lives led by many children throughout the developing world regularly meet the working definition of "disaster:" inadequate access to food and water, a disruption in educational opportunities, a lack of suitable medical care. What the natural disasters of 2011 serve to remind us is that it is not simply during times of disaster when children bear burdens beyond their years. Poverty denies them every day the "luxuries" that come with childhood -- the opportunity to learn, time to play, freedom from worry, days of innocence.

As we continue to address the needs of the thousands of children affected by catastrophic
weather conditions, a mission that is critical and far-reaching, we cannot avert our focus from our core responsibility -- serving the millions of children and their families whose daily lives are the equivalent of a natural disaster... no matter what the weather.