Jaleel White has worked in Hollywood since he was a child, acting in everything from The Jeffersons to Dreamgirls to the Sonic the Hedgehog animated TV series. But he's admittedly most well-known for one role: Steve Urkel, the geek next door in the sitcom Family Matters who became a 90s icon. Since the show went off the air in 1998, White has kept himself busy, attending UCLA film school and working as an actor and a writer. He is currently starring in a new web series called "The Road to the Altar," a mockumentary about wedding planning. I recently spoke with White about Urkel, the web and why he hasn't been on reality TV.

Huffington Post: You were only 12 when you took the role of Urkel and it was originally intended as a one-time guest appearance. If the character hadn't taken off like it did, what would you have done with yourself?

JW: I'm more of a creator. What it is to be an actor is, you need somebody to give you the gold to work with before you can be deemed a good actor. At the end of the day, Eva Longoria still needs Marc Cherry to put all the great lines in her mouth.

HP: At the time Family Matters went off the air you said had some bitterness about the role of Urkel. Have ten years of hindsight changed your thoughts?

JW: I love what I did. But when you're on the air long enough, certain things jump the shark. But as far as [playing Urkel] was concerned, that was a dream role.

When people ask me, "Jaleel, do you feel that role held you back?" I'm like, "No, that's actually the only thing that kept me in the business." It taught me that I could be really good at something.

HP: So you haven't found it difficult to escape typecasting?

JW: I've probably been typecast about as much as Neil Patrick Harris was, and it seems to be working out alright for him. It'll work out for me in the long run.

HP: You wrote one episode of Family Matters and you went to UCLA film school, and you have a script in production called Did U Get My Text. What inspired you to get into writing?

JW: I got the writing bug when I was probably around 17 or 18. From an artist's standpoint, that was just so much more of a high to write a character, to write everybody's character. I knew what everybody's viewpoint was. I just got addicted to it. 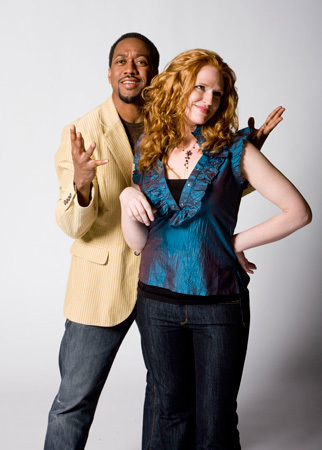 HP: How did you decide to get involved with "Road to the Altar?"

JW: The thing I liked the most was that I got a chance to do some drier stuff. It was shot in a way that I like. I like shows like The Office and movies like Best in Show. Christopher Guest is a comic hero of mine.

HP: What are the advantages to working in the mockumentary style as an actor?

JW: You really get a chance to go with the moment, because they probably have about three cameras rolling at any given time, and they're all trying to stay out of the way of each other. There's really good room for improvisation.

HP: How does working on a web series compare to acting in film and television?

JW: First off, the food is not so good. It cuts down on a lot of accoutrements. The lighting times for set-ups [aren't there.] In "Road to the Altar" we did 71 set-ups, 72 set-ups in a day. We're doing 16 pages in a day. You really are in improv class with the cameras running.

JW: Part of those decisions are made for you. I'm not the kind of person that likes to talk about money, but the fact of the matter is I was compensated very well [on Family Matters], and we stayed on the air for nine years.

Another thing is, I come from a background that says if you don't have anything nice to say about somebody, you don't say it. That's counter to reality television. It's very difficult to make reality television compelling without being nasty and mean-spirited. Look at I'm A Celebrity, Get Me Out of Here! It only got ratings because Speidi was fighting with everybody. That's just not my personality.

JW: I think the web is about to turn TV upside-down. And I couldn't be more excited. I wish that I could sit here and say that I've been on the curve and seen all of this stuff coming, but I can't. I'm reacting like everybody else.

HP: And with those changes, where do you hope your career goes in the next five years?

JW: I hope to be creating content. I don't know what medium, to be honest. But I'm going to change some rules right there. I want to continue to stay on the feature side. I've done some independent films, I'm working on another one right now. This is baby steps for me.

They erroneously said I got Charles Barkley drugs, they said I was dead. I've always been jealous of rappers, because they have mixtapes. They don't have to release an album, but they can release a mixtape out into the community and people don't have to play 'Where are they now?' games and it keeps them fresh. I feel like the web series is the actor's mixtape now.