When my 10-year-old daughter, Emma, was a toddler, she had a mermaid finger puppet. It had long black hair, sported a blue bikini top and had a blue sequined tail. At the time, I thought it was the first of what would be many dolls.

I loved dolls when I was little. My favorite doll was named Maribelle. Her left hand, the victim of my rage when I was 4 years old and hacked off three of her fingers with a pair of pruning shears was a reminder of anger gone awry. I immediately regretted my actions and attempted to glue her fingers back on. Crazy glue was not the common item found in every tool box as it is today. My options were Elmer's and rubber cement, neither of which could repair the damage. I then tried tape with no better results. At some point the fingers were lost or I threw them away, I can no longer remember. Mirabelle's fingers, while physically gone, are forever etched in my conscience, an impulsive act I could not undo.

Still, I loved Mirabelle, and though I eventually moved on to a series of other baby dolls, little girl dolls and finally Barbie dolls, my first love was Mirabelle. All these years later Maribelle resides in the blue and silver striped trunk she originally came in, now in an upstairs closet in my mother's house. I have never been able to part with her; my thinking was that if I had a daughter, perhaps she would one day want to have her.

When Emma showed interest in the mermaid, I had high hopes for Mirabelle's return. Only, it turns out, Emma's mermaid did not hold the same sort of feelings as Mirabelle had for me. The mermaid was the beginning of a series of objects that Emma was fascinated by. The item that eventually replaced Emma's mermaid was The Corpse Bride from the Tim Burton movie with the same name. Then it was Jessie from Toy Story, and after that a long stick picked up from the playground. From there she gravitated to a series of sticks, balloon strings and her current favorite: packing string. The packing string is a work in progress, held together in the middle with masking tape, then scotch tape, which was then covered in reinforced packing tape and finally covered in turquoise duct tape. When we were at Granma's house, Emma covered the turquoise duct tape in masking tape she found in a drawer in my mother's kitchen. When we returned home, Emma covered the masking tape with yet another layer of the turquoise duct tape. It has a certain heft to it and looks like this: 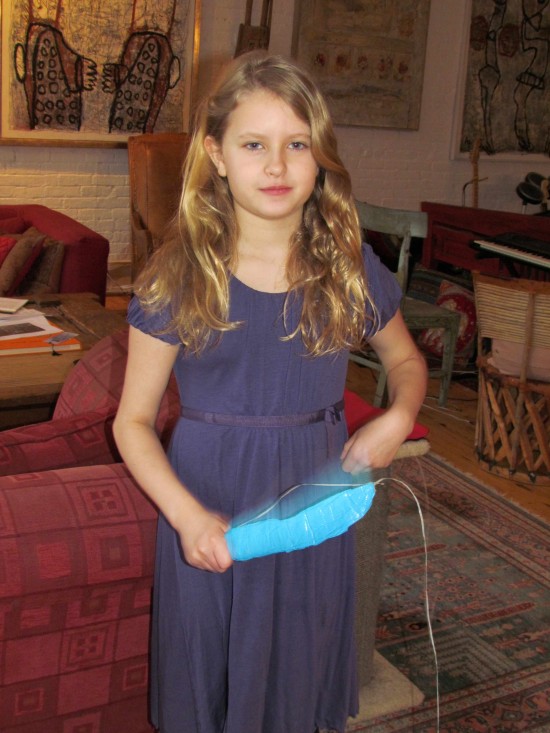 I know a little more now than I did when Emma first ran back and forth from our front door through the house and back to the front door with the finger puppet held between her thumb and index finger, the mermaid's black hair swinging to and fro as she ran. Today Emma holds her "string," as we call it, in her hand while dancing. Her string serves as part security object, part stim object (stim -- also known as self stimulation and can be an object and/or action used to soothe, calm and/or focus) and part art object. "An attachment to peculiar objects..." is one of many characteristics of autism, but when Emma was little, we thought she just liked running through the house with her mermaid. Who knew?

For more on Emma, go to: Emma's Hope Book.