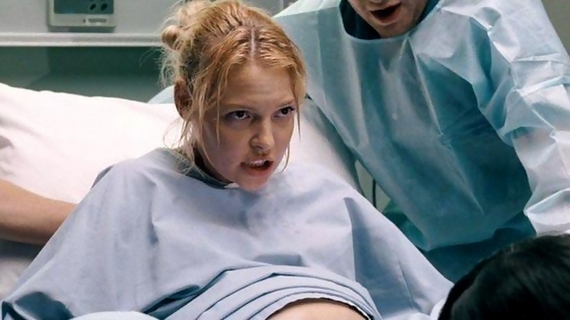 Out there, today, at this moment, there is a battle being waged. This battle has, for the most part, only one identifiable party -- women. The adversary is a hydra... nebulous, slippery, elusive. The conflict is about the visibility of birth, and the fight is against its censorship -- in film, art, social media and pop-culture, to name but a few (1).

The conflict was born from the fact that countless women have had their accounts shut down, or downright cancelled because they posted "pornographic" or "obscene" material. What, exactly, did these women post? Images of labor, children being born -- i.e., how society reproduces itself. Which is an obscene phenomenon in itself, given that violence -- as the thing undermining society -- is ubiquitous, everywhere, and all too eager to stream. Yes, you can find labor online, but you have to go looking for it. Unlike violence, it will not find you. 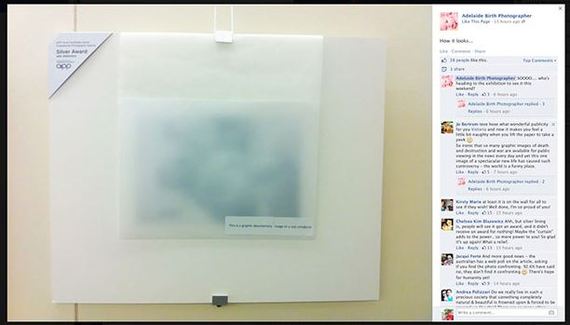 The above photo was taken at an art gallery in Australia, in which an artist had a birth photo censored. Viewers complained that the image was "too confronting." Photo by Victoria Berekmeri.

Don't believe me? Go ahead and Google it. All over the web -- most likely beginning as a blog arrrgggggg by a frustrated mother then picked up and called out by a news editor -- birthing photos are getting flagged as obscene, a label applied in the United States when a work of art appeals to our prurient interest (i.e., it arouses unwholesome desire), when it depicts in an offensive way sexual conduct, or when a work, taken as a whole, "lacks serious literary, artistic, political or scientific value." This is at least according to the most influential, and most infamous, court case on the matter (Miller vs. California, 1973).

So, either we are censoring birthing photos because they really are turning us on as a viewing population, or they do, despite what we might think, depict offensive sexual conduct, or, finally, because they lack value. Ridiculous, incorrect and sad is how one could label the above points. Let's propose a fourth, alternative theory -- we are at a loss as to what this type of image really is. Aside from the disturbing niche of pregnancy and labor porn, clearly we don't know how to classify this type of image, which really means we have no way of understanding what it is this image is saying. It's about time we do.

What exactly is birth imagery? It involves nudity, but it isn't porn. It is intense, dramatic, bloody and "violent" in the human struggle type of way, but it isn't violence. Some claim it is beautiful, and it is, but for the majority of the population it is not pleasing in the manner of a painted waterfall or a vibrant still life replete with tulips, lilies and an empty park bench -- a mother pushing out a slimy infant is not your screensaver; if it is, let's talk. Birth imagery isn't journalistic, nor political, nor essentially personal, since birth has for the majority of history been a public or quasi-public event, excluding modern times. Birth imagery isn't fine art, pop art, sentimental, abstract or conceptual art. 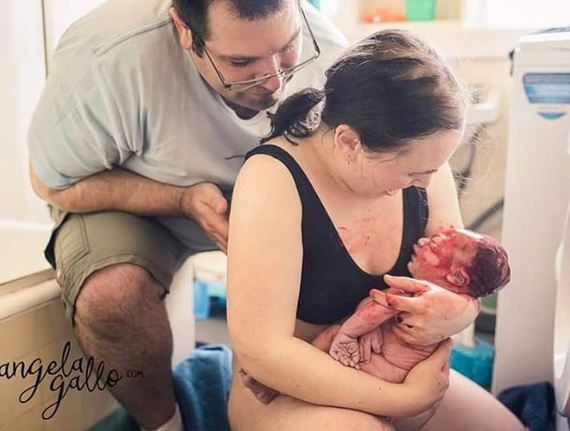 This photo won awards, but was still censored. Photo by Angela Gallo.

Childbirth imagery does not need to have a label, and like most complex imagery it crosses multiple boundaries at different times on different occasions, but it does have a truth telling power. The problem is, of course, what is its truth? And why are we - the collective "we" of mass culture -- turning our heads?

It was the end of the 15th century, in Rome, and beads of sweat poured down the bent backs and foreheads of the excavators. Slowly, the dirt was removed in buckets, and hauled up and away slowly, rhythmically. Images started appearing in the filtered light, meters below the earth's surface, and candles would have been brought close to make sense of the frescoes before them. Shocked. Bewildered. Unsettled. Indigestible. It was indeed art, but nothing recognizable. They wouldn't have even recognized the genre -- men becoming horses, horses becoming men, naked women with heads becoming flowerpots, breast-flowers, stone columns with faces.

What was being exhumed was Nero's imperial Domus Aurea -- the "Golden House" -- a palatial expanse built in the 1st century A.D. but subsequently buried and looted, mainly due to political turmoil in the 2nd century. It was from the excavation and discovery of the fantastical art adorning Nero's walls that we got the word grotesque, coming from the Italian grotte, meaning excavated rooms.

Not at all to be confused with "disgusting," art history would later label works of art as grotesque if, standing before them, the viewer experienced a similar je ne sais quoi -- shock, bewilderment, discomfort, and an inability to make sense of it. It is along these lines that Robert Warren defines the grotesque:

Shock is of the essence of the grotesque. The grotesque is one of the most obvious forms art may take to pierce the veil of familiarity, to stab us up from the drowse of the accustomed, to make us aware of the perilous paradoxicality of life.

By all the standards, ruminations and definitions of the grotesque -- as an image-type that is repressed, censored, shocking, terrifying, crossing boundaries, challenging our mental habits - birth imagery fits the definition. Hence, the infantile grotesque. But we shouldn't stop there. This is where we need to begin. In fact, when birth imagery is understood in this register, you are forced to ask why it has landed in this category, what other forces are at play making this so, and what it says about our future as individuals, as a people. If we can understand these aspects, then childbirth and its censorship becomes the lens through which we can view the health of our culture.

This was the first installment on Childbirth Censorship.
Stay tuned for part II.

1) "Why Did Facebook Remove This Photo of a Woman and Her Newborn?," at NY Mag.

"Why was this award-winning birth photo banned by Facebook?," at Babycenter.

"Controversial image of the moment a woman gives birth is censored by gallery... and then reinstated after artist complained," at Daily Mail.

PAID FOR BY HILTON
Wellness

The Zappos After-Christmas Shoe Sale Is Not To Be Missed