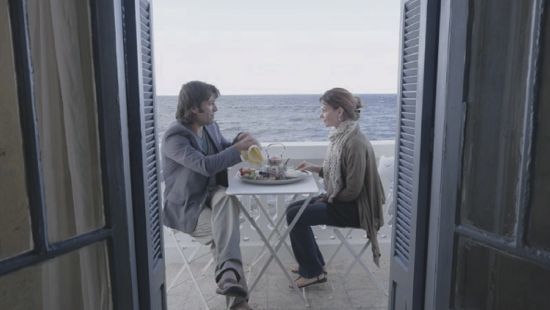 Last week, I received an email from a publicist friend telling me that I simply had to watch the film Arwad, which screened at the recent International Film Festival Rotterdam. Her exact words were "I watched a film tonight that blew me away" and being that I trust her judgment a lot, I found a way to view it, as soon as possible. She was right. Arwad blew me away too.

But unlike some films that tear your heart apart and then offer it back to you on a platter, Arwad -- co-directed by husband and wife team Samer Najari and Dominique Chila -- enters your soul quietly, finding a spot inside your thoughts, finally settling down slowly in your heart. It wasn't until I started dreaming about the film and discovered all my conversations included mention of it that I realized the strength of its message and the carefully crafted beauty of its themes.

Arwad, which is the name of an island off the coast of Syria, asks us one of the hardest questions ever: Where do we belong? Perhaps the biggest tragedy in life comes from not understanding that. It's the plight of the refugees, emotional and physical, who await, or search for something that no longer exists. As Najari said so beautifully during our Skype interview "childhood is not a geographical place." While we are busy longing for our past, our home countries, our lives as they were there, we sometimes forget to recognize our perfect presents and the great possibilities of our futures. The late Anthony Minghella once said "the feeling of not belonging, of not being entirely worthy, of being sometimes hostage to your own sensibilities, those things speak to me very personally." A great filmmaker knows how to translate those feelings to his audience, as Najari and Chila manage so flawlessly.

Well-known Canadian actress Fanny Mallette plays Marie and Julie McClemens plays Gabrielle. Both women manage their characters with great care and deep insight making them believable but more importantly, profoundly understandable. Also unconventional by today's standards is the courageous cinematic choice Arwad filmmakers make by not touching on Syrian politics or its current embattled situation, aiming instead to help us discover the struggles within us, through one Syrian man who never stopped longing for home.

Are there autobiographical themes and feelings in the film? 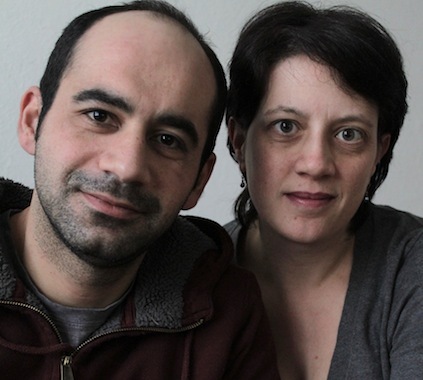 Samer Najari: Actually yes, trying always to define what is our identity. Because I came to Canada when I was 18 years old, I'm half exposed to my original culture in Syria and now I'm half exposed to here. This constant looking for what is identity, is it belonging to one culture or another or is it a trajectory. I'm losing something but I'm gaining something else. That's the big autobiographical theme in the film and the thing too is that we're married, Dominique and I, and our children don't speak my mother language. I let it go, because I cannot be their teacher, I'm their father, but I'm kind of sad because my own culture doesn't continue.

How did the idea for Arwad come about?

Najari: The essence of the film was a challenge that Dominique asked of me, because in all my short movies before I didn't write for women. So at one point she said "I think it's time you write complex roles for women". I started by this and the material was this funeral of this lady who came from Arwad -- when I was in Syria we used to go there in the summertime -- and this lady worked with me here in Canada and used to always speak about Arwad and her souvenirs. When she died, I went to her funeral and in front of me were three generations of immigrants. The deceased, who spoke Arabic and maybe two or three words in French, her children spoke in both languages and her grandchildren who spoke only French. No Arabic at all. I was in front of my trajectory, what I have to go through for my integration in Canada and it's kind of a bittersweet process because you are losing something but you are gaining something else.

Dominique, how did you personally connect?

Dominique Chila: I guess I'm every woman in the film. My father was Italian, my mother from Quebec and all my life I've seen people struggling with not knowing where to go, even when I was young. So in Samer this is a feeling I've known before, looking at my uncle not knowing whether to stay in Montreal, or go to France or Italy, and missing us wherever he is. I can relate very much to that feeling and also I can relate to the feelings of the one being next to someone looking for their home and not being able to help. You can't really make a home for someone, he has to find it on his own. Gabrielle to me was very important because she did all she could but there is just so much you can do to help someone feel at home. And Marie understood Ali in a more exotic way, some people approach immigrants in a more exotic way while Gabrielle has a more down-to-earth feeling about him.

Arwad, you point out in your directors' notes, is not a film about "the Other". To me, it's about discovering the stranger inside us. Your thoughts?

Najari: It's a lot about illusion, because we always have this illusion that elsewhere is our homeland or our love, because it's about betrayal too. What I meant to express when Ali goes to Arwad is disillusion, by saying that childhood is not a geographical place. It's a memory and it's finished, so when he goes there and tries to re-conciliate with these memories of his childhood, he has this illusion that he doesn't belong anymore. And for Gabrielle too, she was betrayed by this man she's loved and for her, for a while, she thought that it was an illusion and all the love she got from Ali, she tried to construct, was destroyed by his one irresponsible act. It's a lot about deception and disillusion.

Chila: I think Ali is trying to find his ultimate self. So that here he doesn't feel complete and going back there he realizes that neither does he when he is in Syria. And for the other characters, relating to a trajectory, I think Gabrielle felt complete but when you get betrayed all this insurance you had goes away, and you have to build another identity. Ali doesn't have it at the beginning, maybe the two women have it and then lose it after. This feeling of being complete and in control of who you are.

Was it difficult working together, while being married?

Chila: I cannot imagine doing a feature film alone. We've seen friends who did a feature film and after finishing it had huge depressions because it was so much for so long. Doing it the two of us maybe protected us from this falling off afterward... Of course it's a challenge. We argue but it's always for the best of the work. We can see through all the arguments that we were reaching to make a better film. Pushing our boundaries at the same time.

Najari: It's like a debate, like a constant debate. Because it's not our first collaboration, Dominique used to work with me, we met in University, at cinema school in 1998 so since then we are always working together. We've figured out a way to always debate but in a constructive way. If I don't like an idea I might criticize it right away. And that's how we push forward. It's kind of difficult on a personal relationship because we have to debate a lot but it's always with respect and it's always like the horizon, in front of us. It divides the pressure instead of multiplying it.

How did you find your leading man, Ramzi Choukair who plays Ali?

Najari: It was very difficult because the main male character has several points to be respected. Especially the language, the dialect of Syria has to be really respected, from the Syrian coast. And the main thing is the charm, charisma that the spectator could forgive him for everything. It was four months before shooting and everybody was going crazy. At one point I was desperate, so I looked at Google and typed in "Syrian actor"... One morning, with my coffee, I found the fifth link of the Google search, and I went there and I said to Dominique "come look at this guy, he's got so much charisma, so much presence and so much sadness in his eyes." Afterward, I had to go to Lebanon, and the producer and Dominique saw his casting video, and they told me to change my ticket, to stay one night in Paris to see him. And when I met him, I fell in love, (giggles) love at first sight.

Images courtesy of the filmmakers and Productions Unité centrale, used with permission