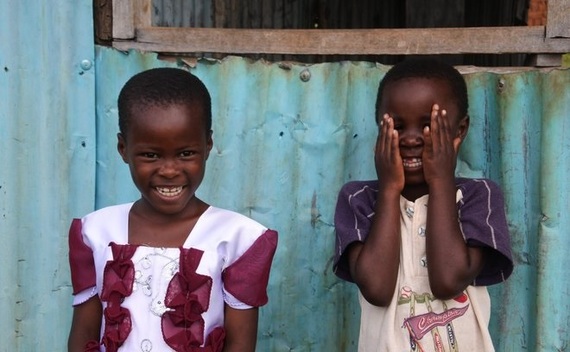 For more than a year, we have been analyzing the issue of childhood nutrition (along with a large number of other topics that go into the post-2015 discussion). Nutrition is obviously one of the most critical issues for development. Both children and adults need a good quality diet, but, like others in this field, we have come to believe that the first 1,000 days of a child's life -- from conception to age two -- are vital for proper development.

Poorly nourished infants don't grow as tall as their peers, and measuring the proportion of stunting (being lower than the expected height for age) in two-year-olds is a simple way of checking for malnourishment. These children don't just fail to thrive physically; they also fall behind better-fed ones in developing cognitive skills. This lack of development has real long-term consequences. Stunted children do less well at school and lead poorer adult lives.

Of course, most people would feel that feeding people properly -- particularly young children -- is something we simply have to tackle. But as it turns out, it is also an extremely good economic proposition. Good nutrition helps children develop properly and produces people who are able to make the best of all the opportunities which come their way.

We asked two of the world's leading experts on nutrition and economics to document the benefits. Professor Susan Horton from University of Waterloo and professor John Hoddinott from Cornell have written a cost-benefit analysis of nutrition interventions aimed at reducing stunting; they conclude every dollar spent on nutrition in the first 1,000 days of a child's life can give a saving of an average $45 and in some cases as much as $166. "The returns to investments in nutrition have high benefit-cost ratios, and that this should be a top development priority." 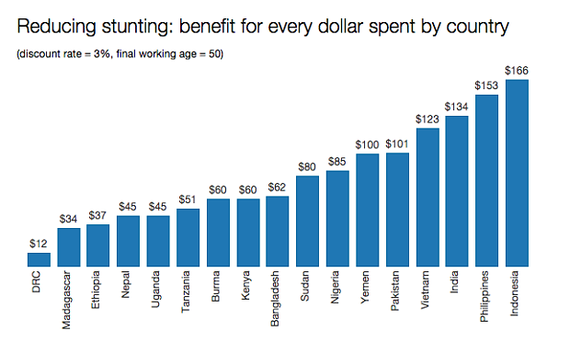 To arrive at their figures, Horton and Hoddinott revisited a number of studies, including a long-running nutrition experiment in Guatemala which started in 1969. Pre-school children in several villages were given a nutritionally enhanced diet and compared with similar children in neighbouring communities, who got a less nutritionally useful diet. Going back to these same children 35 years later, when they were mature adults, showed some startling differences. The well-nourished children were not stunted by age three, stayed in school longer and developed better cognitive skills as adults. They were more likely to be employed and earned higher wages; their better physical and mental development made them more suitable for both skilled manual and white-collar jobs. A study in Brazil, for example, showed that just a 1% increase in height raised average adult male earnings by 2.4%.

In Guatemala the children who were better nourished turned out to have a much higher income as adults, compared to the control group. They had a 66% higher household consumption, an impressive improvement in quality of life from simple interventions in childhood. Spending a small amount -- just $96 in total -- on providing nutritional supplements, deworming, and improving the balance of the diet had paid back handsomely. Over a working life, between the ages of 21 and 50, we can expect that a dollar spent on early childhood nutrition will on average do about $45 worth of good over a wide range of low- and middle-income countries. That makes it a truly phenomenal use of money.

And in the case of Indonesia, the benefit is much higher still, up to $166 of benefits for every one dollar spent and this illustrates an important point. It costs about as much to deliver good nutrition in each country, but the benefits are greater when income levels are already higher and the economy is growing strongly. The great thing about feeding infants well is that it starts a virtuous circle, with increasing benefits for succeeding generations. Good childhood nutrition produces people who can contribute more and help boost economic growth and can themselves bring up well-fed, healthy children. Healthy children grow up to be healthy, more productive adults who bring up the next generation to be even better fed, better educated and more productive.

This study shows that campaigners arguing for better nutrition in the first 1,000 days have an overwhelming economic argument. It also shows that nutrition definitely belongs among the best targets for the post-2015 promises.