At Civil Beat we recently received a visit by several pro-GMO and pro-pesticide farmers. They argued that pesticides and GMOs are tools that farmers in Hawaii need to be competitive.

And maybe that is true, but one of the farmers offered an array of anecdotes that he felt highlighted the safety of the pesticides that are used in Hawaii. Among other things, he mentioned that his wife had walked around, while pregnant, during pesticide spray preparations.

Do you think she would do something like that, he asked us, if it were dangerous?

My guess, from very personal experience, is yes. Plenty of people would -- and do -- every day.

My father was one of them.

Let me share a little family history. My dad, Charlie Pape, got a job as a teenager in the late 1950s as a campus gardener in the school district in Los Angeles. Later he became a gardening supervisor.

But to his youngest son, in the mid-1970s, he was the strongest man around. He had forearms like Popeye and the biceps of a bodybuilder (without the vanity gym visits). 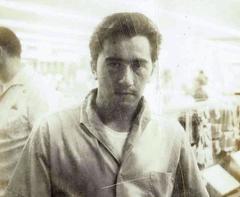 And in my earliest memories, he was already working those muscles on weekends -- in addition to his work for the school system -- tending the greenery around commercial sites like banks, nascent computer companies and corporate offices.

Like so many gardeners -- and many farmers here -- he used the tools of his trade, including pesticides and herbicides. There was fierce competition to secure those weekend jobs through a competitive bidding process so he had to be good and he had to be fast enough to make the work be worth it. And he was convinced that the chemicals he used were safe for a strong, healthy man like him.

My parents were divorced and they lived across the city from one another, so weekends with my dad meant time on "the jobs."

From the time I was eight years old, his truck would pull up in front of my mom's house loaded with gardening tools as the sun rose on Saturday mornings. He'd tap the horn and wait. My two brothers and I would get dressed, climb into his car and head to the first of our weekend work sites.

In temperatures that often ran well into the 90s, sometimes reaching triple digits, he would dish out fatherly lessons about hard work, meticulousness, the value of labor and accidentally -- I'd learn later -- how little we knew about the powerful chemicals that people like him used.

Outside a large Great Western Bank with an expansive parking lot marred by cigarette butts, beer cans and discarded newspapers, he would hand out rakes, hoes and pickup pans. Then he'd point us toward areas of the landscaping that we were supposed to tend to. "The weeds -- gotta get the weeds," he'd say as a mantra to motivate his sleepy sons -- a mantra that we repeat with smiles to this day.

Then, after raking up a blanket of fallen yellowed leaves around the planters, he'd put a thin paper mask over his mouth and sling a red canister that looked like a primitive fire extinguisher over his shoulder. Wielding a clinical-looking copper-colored sprayer in one hand, he'd relegate me, the youngest son, to the interior of his truck.

"Stay in there; this poison'll kill you," he'd say. Then he'd venture off to spray particularly resilient weeds.

The meaning of the words didn't really sink in, but the few times when he realized that I had opened the door and gotten out of the truck, I got an ear-full, with the threat of plenty more.

Sometimes, as we prepared to leave the site, he'd stop to trim a few overgrown tree branches with a lumbering tool that reminded me of the grim reaper. I stayed in the truck.

My father never liked doctors much. For one, they tend to speak in a perplexing language, a little like scientists or lawyers, and my dad didn't trust any of them. He preferred people who did real things, who made something or fixed something. So he avoided doctors whenever possible.

But in his 40s, a birthmark on the end of my dad's nose began to grow. A few years later, strange lumps, like giant mosquito bites, appeared on his shoulders, his back, his neck. To him, they were like weeds on his body that he couldn't cut or spray away.

He went to a doctor and was diagnosed with cancer -- non-Hodgkin lymphoma -- and he began treatment. He was so dedicated to his weekend jobs that he tried to continue to work on them even as his legs began to go numb. And after he gave the jobs up, he would cruise around town with his second wife to see if the people who replaced him were doing a satisfactory job. A little cancer wasn't going to stop a supervisor. 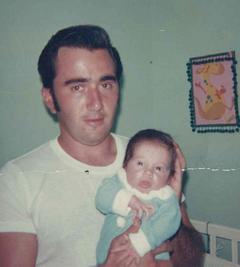 He started chemotherapy, and he began to lift small weights to keep his arms functional despite the chaos coursing through his lymphatic system. If he was going to win his battle with the elements, it would be one muscle fiber at a time.

His sense of humor, never gentle, took a darkly humorous turn as his "chemo" went on.

There was a phase of remission.

But within a year, the cancer returned. The treatments became more exhausting. My dad's forearms somehow remained muscular even as he began aging at high speed.

In the course of two years, a remarkably fit and strong man in his 50s became the stereotypical cancer victim. He was hairless and aged. There were dark circles under his eyes and his skin looked tired and strangely pale. Pain accompanied him everywhere except when the medicine hid it.

When then-professional baseball player Daryl Strawberry visited cancer patients in Los Angeles, followed by journalists, his photograph appeared in the local newspaper. The prototypical cancer victim who appeared next to the sports star in that picture was my father.

Charlie Pape came from sturdy, healthy, long-living stock. His father was a mechanic who kept working on cars until he was 85. The old man walked miles each day until he was 90, and died the following year after a mercifully brief illness. My grandmother died days before her 96th birthday.

But my dad seemed to age a decade in the space of 10 days. He stopped eating and then sank into a delirious, heavily medicated sleep. He was 57.

After he died, my grandmother asked me to clean out the garage where my dad had stored many of the tools and chemicals that he used.

I had grown up in and around that garage so I knew there were a lot of things that children weren't supposed to play around with in there. But I didn't expect to find a number of decades-old white canisters of DDT buried among the other infamous chemicals. (Just figuring out how to dispose of them wasn't easy.)

From the moment my dad got sick, my brothers and I wondered whether he had been right when he said that this "poison'll kill you."

The truth is that it is very difficult to be 100 percent certain about what causes many cancers. There are just too many dangerous products around us.

Non-Hodgkin lymphoma is one of the more common cancers in the United States. Cancer.org says that it accounts for around 4 percent of all cancers in our country.

My brothers and I decided not to transform our lives into a search for the truth that would likely, from a scientific perspective, never come to fruition.

But I have learned some things that might be relevant to people in the fight over pesticides here. Non-Hodgkin lymphoma is, scientists say, the result of changes in DNA that occur after birth, rather than via genetic inheritance. Such dangerous mutations are likely the result of exposure to, among other things, cancer-causing chemicals like benzene and certain types of weed-killing insecticides and herbicides. Yes, the sort of chemicals that my father used for three and a half decades. That said, research continues to define the exact link.

Scientifically speaking, any definitive answer has already been slow in coming, and that may not change any time soon.

But as the debate about biotech, GMOs and pesticides continues to roil Hawaii, I can empathize with farmers who aren't too different from my dad, who labor to find a way to earn a living in a tough, competitive profession.

And I know that for them, it can be tempting to believe people who tell you that their new tools are safe because it makes the daily grind of work easier. Some of the farmers who visited our offices at Civil Beat also noted that back when they were kids, they were sometimes showered in DDT because people didn't know better.

On the other hand, as the son of an unromantic gardener with a dark sense of humor, I have limited patience for utopian solutions that ignore the basic needs of real people who are trying to get by.

But I do wonder why the companies that have produced a new generation of pesticides since my dad's death don't integrate their past mistakes and a meaningful mea culpa into the way that they address popular concerns about newer pesticides and genetically modified crops and foods.

One way to do that would be for biotech companies to be transparent about the chemicals and genetically modified foods they provide. Afterward, people can decide whether they want to buy them or not.

In journalism, we seek transparency from government. Is it asking too much to apply that to what we eat as well?

Regardless, "Trust us" clearly isn't enough to a lot of consumers, and especially not to many people who live near the land where farmers and biotech companies spray.

Ultimately, I have a lot more to learn about pesticides, their benefits and their long-term dangers.

While I continue to learn, there is one thing that I am certain about. As I teach my boys how to rake leaves and "get those weeds" on the windward side of Oahu, I know that my dad will never meet his grandsons. I just don't know exactly why.