Growing up poor could increase your susceptibility to the common cold, according to a small new study. Researchers from Carnegie Mellon University found that socioeconomic status during childhood is associated with telomere length in adulthood; telomeres are the "caps" at the ends of chromosomes -- similar to the plastic caps on shoelaces that keep them from fraying -- that have been linked in past research to cell aging, as well as susceptibility to infectious disease in adulthood.

For the study, published in the journal Brain, Behavior and Immunity, researchers looked at the telomere lengths of 152 healthy people ages 18 to 55. The study participants were asked whether they currently owned their home, as well as if their parents owned their homes when they were children, as a gauge of their childhood and adult socioeconomic status.

Then the study participants were exposed to the rhinovirus. They were quarantined for five days, and researchers evaluated them to see if any of them developed an infection. They found that participants who had a lower socioeconomic status during childhood were more susceptible to getting sick after exposure to the rhinovirus, with odds of developing a cold going up by 9 percent for each year their parents didn't own a home during their childhood. 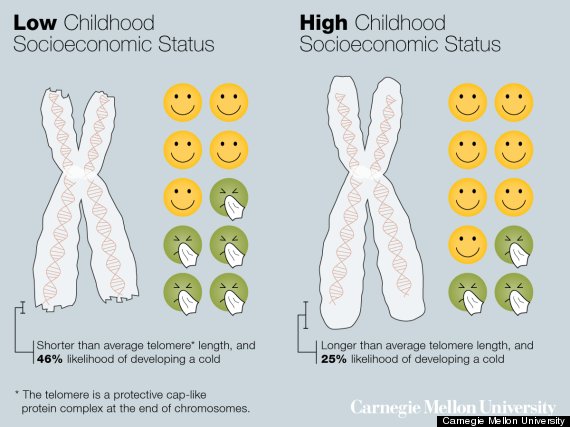 "This provides valuable insight into how our childhood environments can influence our adult health," study researcher Sheldon Cohen, a professor at Carnegie Mellon University, said in a statement. Cohen is the researcher who first found an association between shorter telomeres and increased susceptibility to acute infectious disease in adulthood.


Hand Washing
Flickr:peapod labs
There may be no more promoted solution to avoiding the flu this year (besides the flu shot, of course) than diligent hand washing. As many as 80 percent of infections are transmitted via contact like sneezing, coughing or touching surfaces that have been sneezed or coughed on, says Tierno, and then touching "your mouth, eyes or nose, which are the conduits of viruses into the body." He recommends scrubbing before eating, drinking or touching your face, and disinfecting shared surfaces in the home (like the bathroom) and the office, like phones, computers and fridge door handles.
Sleep
Flickr:bradleygee
While you're off in dreamland, your body gets to work repairing cells and injuries you may have incurred during the normal day's wear and tear, says Tierno. Getting your seven to nine hours a night means your body can repair and heal itself and ward off infections. "If you don't get the appropriate sleep, that system is not operating and you're on a steady decline over time," he says. In fact, skimping on sleep is as disruptive to the immune system as stress, according to a 2012 study. And earlier research suggested that sleep patterns may play a role in a gene that helps fight off bacteria and viruses.
Exercise
Flickr:Official U.S. Navy Imagery
Getting your blood pumping regularly can increase the activity of a type of white blood cells that attacks viruses. Shoot for an hour a day, says Tierno -- but not necessarily all at once. "Even if it's walking around the office, up stairs, down stairs, to and from work -- it doesn't have to be continuous," he says.
Zinc
Flickr:cherrylet
Getting the proper amount of the right nutrients and minerals as part of a healthy diet "leaves the body in optimal condition to fight the battle," says Tierno. This means cutting back on sugary, fatty foods and upping your intake of vegetables, fruit and lean protein, he says. One of those nutrients that gets a particularly healthy reputation during cold and flu season is zinc, and for good reason. "Zinc interferes with viruses gaining full access to our cells," he says. "Zinc may block certain metabolic activity." While it's not the end-all cure, foods rich in zinc, like oysters and wheat germ, may offer some protection.
Garlic
Flickr:flowercarole
The anti-microbial properties of this pungent bulb (and its relative, the onion) can fight off certain bacteria and viruses, says Tierno, as can the compounds in other herbs and spices, like thyme. It's likely due to the compound allicin, which seems to block infections. Try it in your next bowl of soothing chicken soup!
Water
Flickr:StockPhotosforFree.com
Thankfully, most of us are inhabiting cozy-warm homes this winter, but those cranking radiators come with a downside. Indoor winter air is much dryer than our bodies would like. Without sufficient moisture, says Tierno, "immune system cells can't optimally work," so it's important to stay hydrated. (A humidifier can also help.)
Skipping Happy Hour
Flickr:Matthew Wilkinson
Alcohol suppresses both the part of the immune system that protects you from coming down with something and the part that fights off the germs already in your system, so knocking a few too many back can put you at increased risk for catching the bug going around -- and having trouble kicking it.
Laughter
Flickr:Mike Monaghan
A positive attitude can take you far -- even, maybe, to age 100. But along the way, a life of laughter and optimism could also help you sniffle through fewer bouts of the flu or colds. While there's much that's still not well understood about the process, it seems that certain immune cells are produced by a big belly laugh, says Tierno.
Massage
Shutterstock
A favorite solution for de-stressing, massage can also help you stay physically healthy. While there's been little research into exactly how it works, massage certainly increases circulation, which may help promote the general "state of wellness in the body," says Tierno. "Nutrients are passed around better, the blood flow is better," he says. "It's a very useful thing to get a massage."
Sex
Shutterstock
A 1999 study found that getting frisky a couple of times a week can boost immunoglobin A, an antibody that fights off colds. Just make sure your partner isn't already sick!
More:
healthy living
Newsletter Sign Up
An essential daily guide to achieving the good life
Subscribe to our lifestyle email.
Successfully Subscribed!
Realness delivered to your inbox