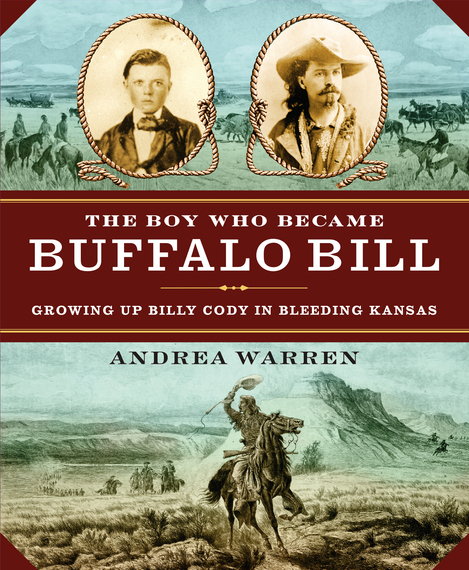 The Boy Who Became Buffalo Bill: Growing Up Billy Cody in Bleeding Kansas by Andrea Warren is lot more than a biography of a famous Wild West showman. It is also a children's book. But I believe it is for anyone who is interested in an aspect of American history that is usually passed off in text books, if it appears at all, in one or two sentences. In the eleven years leading up to the Civil War, the bloody and destructive Kansas-Missouri conflict over whether or not the Kansas Territory would become a free state or a slave state, presaged the Civil War that nearly tore our nation apart. It is also the story of a childhood on the frontier where death could occur at any moment.

Billy Cody was eight years old when he lost his revered twelve-year-old brother, Sam, in a riding accident. Shortly afterwards, their father, Isaac, settled a claim for the family farm, near the Missouri River in northeastern Kansas Territory. Politically active, he was labeled an "abolitionist" by slave-owners in Missouri- a title that invited constant and real death threats. Not long after their move into their new home, Isaac was stabbed and severely wounded by a would-be assassin. While his father was recuperating in a safe haven away from his family, Billy stepped up as the "man of the house" and started earning money. Over the next ten years this boy learned how to drive cattle, hunt buffalo, scout Native Americans, speak a number of Native American dialects and survive a month on his own in the wilderness while recovering from a broken leg. In this page-turning rendering of a frontier child's life, young Billy Cody faced imminent death a number of times from the dangers of the frontier to the brutality of the raids and battles that gave that part of the world the title "Bleeding Kansas."

Andrea Warren writes history from the point of view of children who must survive problems that are caused by grown-ups. The most popular and enduring children's fiction, from The Secret Garden to Harry Potter is often about orphans who manage to overcome every child's worst fear--losing loving parents. The Boy Who Became Buffalo Bill is about a real child who grew up very fast as most frontier children did. With threats to life on all sides, both natural and man-made, childhood in the Kansas Territory was far from being a sheltered, protected existence. The contrast to the cosseted up-bringing of many of today's children is striking.

Buffalo Bill, the showman, brought the authentic "Wild West" to audiences. He became an icon of what it was to be an American. The Boy Who Became Buffalo Bill is a glimpse into what it took to get there.