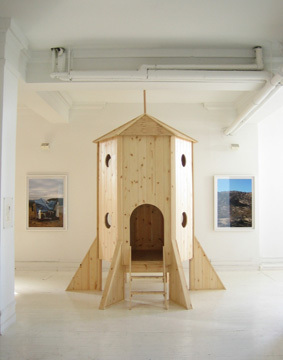 The first thing you see when you enter James Franco's debut art show is a plastic playhouse--the kind that comes in bright primary colors and can be found in suburban backyards across the country--that has been melted to half its height. If you are able to ignore the film showing Franco wearing a very life like rubber penis on his face, which is being projected in a room just behind the vitrine displaying "Plastic House," you'll find a photograph of the warped dwelling, set beautifully against mountains and sky, mounted in the gallery's main room. The piece is reminiscent of a collapsed cake or a semi-deflated Oldenberg; it provides a tactile entre into an otherwise more conceptual and performative show in which a number of figurative playhouses are erected and blown up, burnt down, or manually destroyed.

Celebrity, naturally, plays a role in the young actors work. It's why he's got the show in the first place, why he has a (bad) story in Esquire and a book forthcoming from Scribner's this fall; it's why he was able to walk on to his new role as an English Ph.D student at Yale and why he has been able enroll at a laundry list of schools in the northeast, including Columbia, NYU, and Brooklyn College. (Chances are you know someone who tried to nuzzle into the heartthrob's shoulder while he dozed in class.) It's also why he has been playing an artist named Franco on General Hospital, why that seems so incongruous, and why he suggested that his appearance on the show was performance art in the Wall Street Journal. His personal fame, perhaps unavoidably, and in a way that informs his interesting engagement with sexual difference and boyish violence, sometimes hypersaturates the experience of his art. 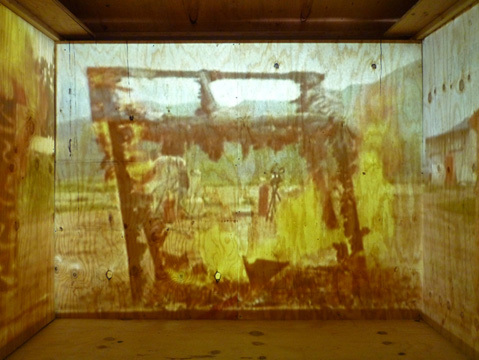 Inside the Clocktower's main gallery, Franco and his team have installed three very simple and unvarnished, wooden edifices. "Burning House" consists of a room with an angled roof and a cutout for a window into which you can stick your head to watch multiple channels of video, projected on the interior walls, depicting the structure burning. "Rocket" looks like the Boy Scout wanted both a tree house and a space ship, and, seeing a way to satisfy both dreams of escape, decided to put the two together, complete with portholes. Finally, an elongated sort of chapel called "Viewing House" has a loop of eight films shown in projection against the back wall. Here you see lo-fi footage of doppelgangers of the other structures in the show as they are subjected to their respective forms of unmaking via heat, flame, or faux explosion. On nearby televisions, there's a two-channel film showing a Franco look alike succumb to fatigue as he smashes apart two of these constructions with an axe. There is also real home movie footage of the actor as a child, and a sort of trash heap installation of objects taken from a childhood home. Some of these things (a toy race car, a James Dean poster, a Betty Boop lunch box, to name a few) are lined up on an easel and shot through with bullets in yet another video.

Scribbled-on pages, torn from the guide to boyhood from which the show takes its title, are on display on load bearing columns. On one that reproduces an image of the temple of Artemis (burnt down by Herostratus for the fame the arson would confer upon him) Franco has scrawled the word "house."

At work in this series of destructions is the familiar, pyromaniacal frustration of a kid at odds with the world and its architected environments--the many rooms we inhabit and are fitted into--especially those delimiting our sexual and professional identities. Franco's orientation has been the subject of some controversy: is he an actor or an artist? a serious polymath or a dabbling buffoon? a straight trickster or a gay performer? 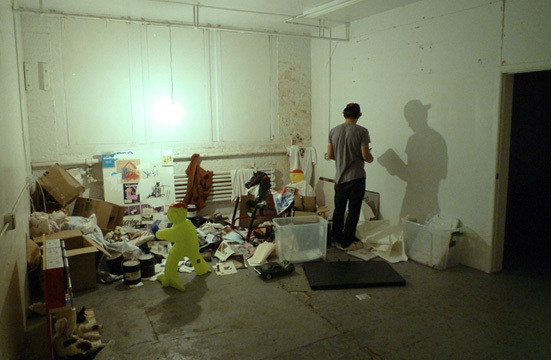 The answer to this last question may be clear to some, nonetheless Franco is intent on having some fun with our assumptions. Also on loop in the "Viewing House" is a hilarious appropriation of the tradition of Kirk/Spock sex narratives (yes, Captain Kirk and Mr. Spock) that launched the genre of homoerotic parody known as slash fiction. The bit is as funny as it is pertinent. In Franco's telling, our star crossed voyagers get hung up in the bedroom because of a species divide that prevents Spock from becoming functionally aroused in the way Kirk expects. "It would be illogical to cover my genitals," the Vulcan explains to his baffled partner, "I use them to operate the science console."

It is interesting to see how Franco mixes overt nods to sexual difference with more coded and complex references to queer iconography. In a longer film made with his part time collaborator Carter, a segment called "The Saint" shows Franco ordering a line of archers to shoot flaming arrows at a mannequin who, in the context, becomes a stand in for St. Sebastian, one of the first homosexual icons. The film also includes a very beautiful shot of a suddenly riderless mechanical bull rotating and softly bucking before an archery target--a really wonderful moment. "The Feast of Stephen," dedicated to (openly gay) filmmaker Kenneth Anger and (probably straight) poet Anthony Hecht, and named for a very homoerotic poem by the latter, depicts a homosexual fantasy incited by a boy on boy beating. The effect of this mix of both public and private outing practices, as I experience it, is to reinscribe techniques of queer performance as rhetorical tropes available for employ by any artist, regardless of sexuality. Pretty interesting stuff. Ok, ok, it's also possible that this is simply what happens when you give a kid with lots of firepower the keys to the queer theory game room.

Either way, this is an engaging first show from Franco, and a daring move from Heiss.

"The Dangerous Book Four Boys" is on view at the Clocktower Gallery, at 108 Leonard Street, through September.