This is the third in a series of four essays examining how Childish Gambino's Because the Internet functions as part of a new avant-garde in contemporary art. Read the first one here and the second one here.

Repetition, whether functioning as feedback loop or contextualization (often both), is an integral motif in Because the Internet. In the above video for "3005," which directly follows "Sweatpants," we find Gambino sitting on a Ferris wheel with a teddy bear as an apocalyptic fire is revealed, burning in the distance. The cinematography and color palette pick up exactly where its precursor left off; the macabre glow of multi-colored bulbs provides a matching Baroque mise-en-scene, while the camera whirls around him using the same steadfast, spiraling restlessness that, here, evokes both a POV shot (from Gambino's perspective) and a disconnected omniscience, wholly outside any human perspective. Unlike "Sweatpants," though, he's not the one inciting the movement, he's stuck in it -- helpless against the swelling fire and the degrading of his stuffed animal -- but his affect, again, is such that you get the sense he still wouldn't do anything if given the chance. He's not even sure what it is he'd be saving, much less if he'd want to. Set against the album's most forcefully earnest and reassuring song, we find a confluence of paradoxes: nostalgia dovetails with cynicism. The bear and the Ferris wheel hearken to childhood escapism, loci in which he can no longer derive the same joy he once did, and meanwhile, the degradation of the teddy bear and the fire in the background smack of unrealized turmoil, chaos, and ruin. He's tugged in opposing directions, caught in the liminal space those poles create. His response is the paralysis of ennui. "Hold up," he repeats, until it begins to feel less like a command and more like a plea, right as the song angles into its climax, "Hold up," until he's disappeared, leaving us with the tattered bear.

Again, an out-of-order song is appended to the end of the video, this one, "Zealots of Stockholm." As if to make the aforementioned sentiments explicit, we find only a small snippet -- the song's sinister build-up to, "Arlanda / Hotel to the bar / Young girl with an accent with her back bent / Ass out to the whole world." And again, we find a subtle update to formula, seeming to reference a predictable, "shake your ass" party mantra, when, upon inspection, the line references flippant standoffishness and detachment, a gloomy inability to even attempt connection, all the while believing it to be an avowal of cool. In the final moment of the video, a silhouette stands in the carnival alley, situated in a middle ground between the Ferris wheel and the fire. There's a productive ambiguity here in the Reader Response vein. As in the Heider-Simmel Demonstration (below), who viewers imagine this figure to be -- and whether he intimates danger or salvation -- depends on their own life experience. 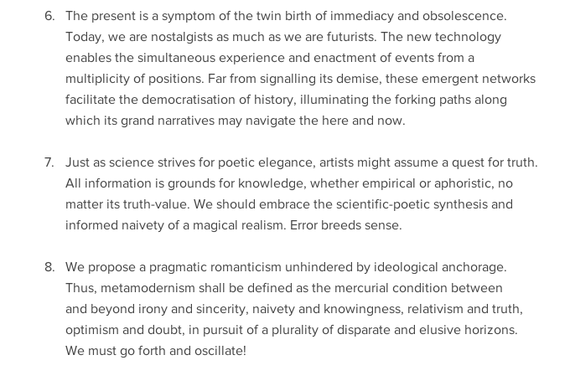 Occurrences that reference the technologies behind the creation, delivery, and experience of music -- the blips of silence in "Zealots of Stockholm," the fourth-wall breaking in "Sweatpants," the drastic changes of register in "Shadows," et al., as well as the multimedia platform of the album -- engage with music as an Internet medium. Aesthetically, we find a foregrounding of "error," moments designed to disrupt our ability to fully "lose ourselves" to the music without in some way considering the Internet. And, in metamodern fashion, after enough listens, these interruptions come to shed their disjunctive quality, sifting back into the album's space with everything else.

This imposition of disorder extends beyond technique. Because the Internet isn't just a collection of songs; the script, a sequence of music videos, a short film, and Glover's social media activity all feed into its experience. As in Bolaño's novels and Kaufman's screenplays, the separation of art and artist is blurred so much that disparate parts converge. What is created in sum is a work that transcends itself via shared context, something facilitated by and therefore mirrored in the movements of the Internet. All the "information" we need is available, but none of it is conveniently synthesized for us; what a given listener brings to it, and thus gets from it, is dependent on their particular journey through and relationship with cyberspace, offering a certain kind of unity in its disparate parts.

Because the commentary stems from autobiography (in its loosely autobiographical qualities via hip hop personae and narrative as well as its positioning within the "non-fiction" of social media), the album also functions as an Internet bildungsroman (put simply: a youth-to-adulthood coming-of-age story) Part of what makes this so poignant is his premonitory knowledge of his "place" on the web. There's a certain sense that Childish Gambino's artistic output is still being judged against Donald Glover's reputation #lifestylereporting. In a past life, Gambino was Glover's wisecracker side project, and a few gatekeepers (notably: @SPINmagazine) have been able to perpetuate this image of him even as Because the Internet made a blatant effort to not only outgrow that image, but to do so by putting it on display. In many ways, he occupies a similar space as Drake in both personal history and artistic interests, but while Drake's past two albums were critical and mainstream darlings, with a few notable exceptions, reviews for Because the Internet were negative to lukewarm (a disparity that Vice illuminates). The title of the album, then, like some of the best turns of phrase therein, begins to feel like more than just a reference to meme linguistics, but a thesis loaded with subtext: a launching point into a conversation rather than its explanation.