Let's talk for a minute about parenthood.

But there's another group of women who, I can almost guarantee, suffer even more scorn than the woman who misses her kid's birthday party to attend a staff meeting or the woman who trades in her satin work pumps for plastic breast pumps: It's the woman who has the guilt-free ability to join her co-workers for a cocktail after a rough day. The woman who has time to work out in the morning. The woman who can cook an amazing, stress-free meal and enjoy eating it with her significant other at 8:00 p.m.

I'm talking here about a woman's right to choose.

I have a dear friend who, just before she married the man of her dreams, insisted that she wanted to wait at least five years before starting a family. One year into the marriage, the deadline quickly dwindled to three. Then one. Then, suddenly, it seemed as though nothing was more important than fertilizing the crap out of her eggs. It was like something in her had biologically snapped and the only thing that could mend it was impregnation. Nothing, it seemed, would make her whole but the experience of bringing life into the world.

And she wasn't the only one. It was happening to other friends as well. And friends of friends. It seemed as though once they reached the age of 28 or 29, they experienced an uncontrollable, instinctual urge to procreate.

But then another interest catches my eye -- a book containing a unique recipe, a documentary about an exotic locale, a bright, shiny object -- and poof! The baby is no longer the coolest thing in the room. 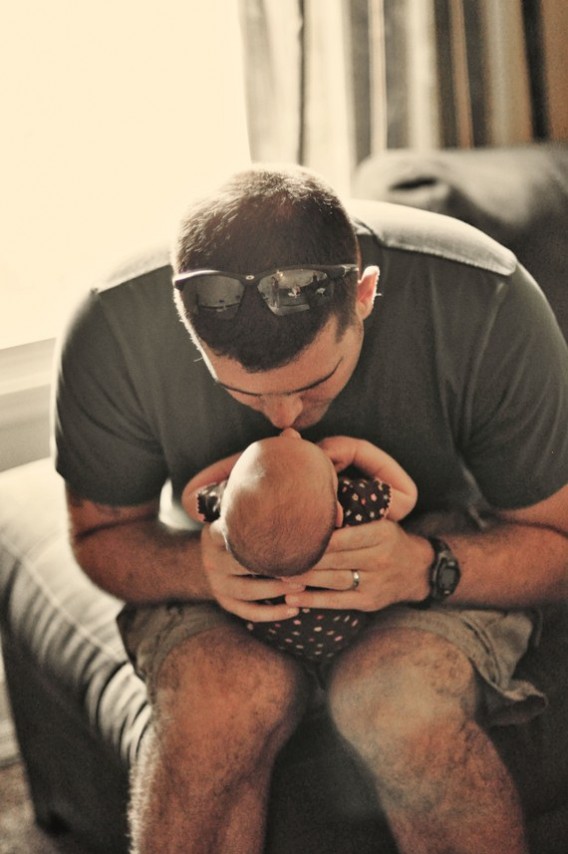 Not even when I see my husband holding one. (Though admittedly it helps.)

And then I think that the amazing baby head smell might not be a good enough reason to have one. Maybe I should wait for that have to have one feeling.

Maybe, if that's the case, I'll be waiting forever.

Of course, when I try to explain this to women who are with child -- either currently or futuristically in their hormone-filled minds, I get a blank stare.

I start hearing from them less. I'm not in on the jokes. I don't get invited to functions, because either there will be babies there and that might make me "uncomfortable," or it's a "mom's day off," and I obviously don't need one of those since every day is a day off for me.

It's just one more check among many in the "bad military spouse" column, and I'm pretty sure I'm on that blacklist already.

But the point is, I seem to be somehow less of a woman if I choose to not have kids.

I'm not a member of the club.

And it really doesn't bother me when I can't contribute to conversations about mucus plugs and nipple shields or what it feels like the first time your baby smiles or produces normal poop. But it does bother me when I'm apparently unqualified to discuss our country's education system during casual conversation. Or the merits of mothers choosing to stay at home versus focusing on their careers. Because, last I heard, you don't need a baby to have a brain.

All of that said, I choose to surround myself with women -- mothers and non-mothers alike -- who are fairly open-minded when it comes to parenting. Women without kids who don't shun the ones who do. And women with kids who don't judge me for a decision -- not set in stone -- that's perfectly reasonable to make. Women who still remember what life was like in the time Before Baby. Women who don't use phrases like, "You wouldn't understand -- you're not a mom," because they know my lack of child does not make me ignorant to the fact that it must be beyond stressful to stay up all night, to constantly worry if you're doing things right, or to miss an opportunity to schmooze with your boss because you have to take a sick kid to the doctor instead. They don't say those things because they know they worried about that before they had kids. They knew it would be hard.

My friend pointed out that for someone who doesn't think she wants kids, I sure do talk about them a lot.

But the truth is, because she always knew she wanted to be a parent, she doesn't understand what it's like to not be a mom. To not have that inherent desire. To hear every day that we "don't understand." To stress out about missing a child whose head we've never smelled. To wonder whether we'll regret the decision once it's too late.

I realize that women who scoff at me are likely insecure about their own decisions.

And I realize when I openly judge other women, I'm displaying -- in the ugliest way possible -- insecurities about mine.

Sometimes I wish my husband had accidentally knocked me up ten years ago, even before we got married, just so I would no longer have to be responsible for this decision. When it comes to the pressures society -- especially other women -- especially my mother -- places on me to get pregnant, sometimes it seems like not getting pregnant during wedlock is far worse than getting pregnant outside of wedlock.

I'd be a card-carrying club member by default.

But there's another club I know I would miss.

The club that allows me to pour a glass of wine at 8:00 p.m. because I want one -- not because it's when the baby goes to bed. The club whose members can peruse the web on a whim for tickets to Lisbon and actually buy them if prices are right. The club in which sleepless nights can be blamed on an unstoppable flood of inspiration and too much caffeine and the Midnight Muse.

Of course, these experiences must pale in comparison to the limitless love of a child.

But then I wouldn't understand.

I'm not a mother.

What about you? Do you think it's strange for a woman to be unsure about whether she wants kids? Do you treat women who don't have kids differently from ones who do? If you're a guy, are you even still reading this?