As an educator who's worked with children from birth through high school over my 20-year career, I'm deeply concerned about the recently adopted American Academy of Pediatrics guidelines for diagnosing children with ADHD. The new guidelines recommend that pediatricians start evaluating children for ADHD at age 4 and continue through age 18, instead of the previous guidelines which set the age range at 6 to 12. 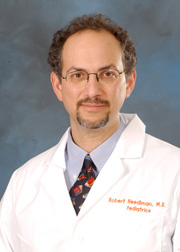 The announcement of the new guidelines sparked in me some questions about ADHD and how we are using medication to treat our children. So I turned to one of the experts, Dr. Robert Needlman (right), co-founder of Reach Out and Read and co-author of the soon-to-be-released ninth edition of Baby and Child Care, Dr. Benjamin Spock's classic parenting manual.

Below is an excerpt of my conversation with Dr. Needlman, who practices and teaches Developmental and Behavioral Pediatrics at MetroHealth Medical Center in Cleveland.

Talk to me about the differences between ADD and ADHD. When did these disorders first really start to emerge in medicine -- and why?

The official manual of the American Psychiatric Association, which is what most pediatricians go by, lists three diagnoses under Attention-Deficit Hyperactivity Disorder: ADHD (combined type), ADHD (predominantly hyperactive), and ADHD (predominantly inattentive). The last one is also called ADD (that is, ADHD without the H), although this is not an officially recognized term now. In general, children with ADD (or ADHD [inattentive type]) have serious problems staying focused but aren't extremely physically overactive. Children with ADHD (or ADHD [combined type]) have problems both with attention and focus, and with overactivity.

When you look closer, though, children with ADD don't only have problems with attention. They also tend to have big problems with planning, and with organization. So, they lose things they need to get their school work done, or they finish homework but forget to bring it in, or they are terribly inconsistent, doing well one day and horribly the next.

These problems all lead to lots of frustration for the children, teachers, and parents. Yet because the child is not hyperactive in a physical sense, her problems might not be recognized. She might be considered "slow" or "lazy," but ADHD (inattentive type) might not be considered. I say "she" because while ADHD (combined type) is much more often seen in boys, ADHD (inattentive type) seems to be about equal in boys and girls.

According to the CDC, as of 2007 about 9.5 percent of children between the ages of 4 and 17 -- or 5.4 million children -- had been diagnosed with ADHD. The CDC also says that boys were more likely than girls to have been diagnosed. What do you tend to see as the "average" profile of a child you diagnose? Is there an appropriate age to make a diagnosis?

Most children whom I think of as "typical" are in first or second grade, have been consistently overactive, impulsive, and inattentive for years, and are having very significant problems in school, at home, and with their peers that are the result of the ADHD symptoms. We think of ADHD as being a problem that is present from early childhood. If a child who has shown no symptoms of ADHD up through, say, age 10 all of a sudden begins having problems focusing or controlling impulses, I'm going to look hard for another explanation.

Can the symptoms that are common to children with ADHD be confused with those of children who do not get enough sleep?

The symptoms are not exactly the same, but there is enough similarity between ADHD and sleep deprivation that it is important to consider the latter before diagnosing the former. ADHD itself is often a cause of poor sleep -- many children with hyperactivity have a hard time settling down. But poor sleep can also make children inattentive, irritable, and, for some, fidgety or "hyper." So, it can be a challenge to sort these things out.

As a pediatrician, how do you suggest to parents the best way(s) treat a child with ADHD? Is medication always an option? Are there environmental changes in the home or the classroom that can create a positive response in a child with ADHD?

Most parents are reluctant to give their children medication for ADHD, and I agree with them. Before considering medication, it is always reasonable to try changes at home and in school, and often therapy. Home changes include making sure there are regular routines for meals, chores, homework, and bedtimes, healthy sleep habits, and healthy eating.

I think that medication makes sense in two situations. One is where all the non-medication techniques have been applied, as best as possible, and the child is still having serious ADHD symptoms that threaten his or her well-being. The other situation is when the ADHD symptoms are so severe that they threaten serious, immediate harm to the child -- getting expelled from school, for example. In those cases, it may make sense to jump right to medication, because medication tends to work fast. But just because you've started medication doesn't mean that you can forget about all the non-medication approaches; these should still be added to the total treatment mix.

One of the most important non-medication interventions is knowledge. Parents and children need to know a lot about ADHD, so that they don't feel helpless, and can make informed choices among the various treatment options.

Almost all children become less hyperactive as they get older. A major drop in hyperactivity usually occurs around age 14 or 15. Impulsiveness and inattentiveness, however, tend to persist. Some children outgrow ADHD, in the sense that they learn how to function well in spite of their tendencies to be inattentive.

There is certainly a percentage of children who truly have a need for medication. However, do you think our society is using medication too often to treat children with mild or borderline cases of ADHD? Do parents tend to request medication for their children, even if it's not absolutely necessary? Is it en vogue to "drug" our children?

Every child with ADHD would do better with parents who are rested, calm, rational, warm, organized, resourceful, and infinitely patient. Every child with ADHD would do better in a small classroom with lots of individualized attention. Often, however, reality paints a different picture. When medication is used in place of needed changes at home and school, then I think it is being used inappropriately.

One of the reasons ADHD is diagnosed so often is that our society offers such limited choices in how children, in particular, can be successful. Every child is expected to sit quietly, study diligently, and wait to be called on before speaking. I think that some of the children who have a really hard time fitting into this mold have normal brains, but they get labeled as having ADHD because we don't have settings that allow normally rambunctious or rebellious children to thrive.

Do you agree with the AAP's guideline change? Is it realistic to diagnose children as young as 4 years of age with ADHD?

I think that special caution needs to be taken when considering ADHD in children as young as 4 or as old as 18. Young children are often highly active, impulsive, and inattentive, on the basis of neurological immaturity or simply temperament; that is to say, the same behaviors that are symptoms of ADHD in older children can be a normal pattern for younger ones. For young children, then, it would be important to observe very extreme behaviors that are clearly well out of the range of what could be considered normal, and to look carefully for other possible causes of that behavior. A very thorough, cautious diagnostic process is critical to prevent over-labeling and inappropriate medication.