My friend lost her daughter a couple of months ago. Within a short period of time, she has become my dearest grieving momma friend. It's a tie that is so strange -- it can make you feel like you've known a person for years. You skip so many stages and go straight to the heart stage -- where you are known in a way few understand. With grieving moms, we understand a pain that no one should. We can speak volumes to one another in a sentence. We can move mountains with a simple, "You are not alone," because the truth is that we are never alone.

This sweet, sweet momma friend of mine celebrated her daughter's birthday on the beach last month. She would have been four, but she passed away a month before. While she was on the beach releasing balloons, a woman and her daughter walked by and offered to take a picture. When my friend told them why they were releasing balloons, the woman said to her, "You guys are so young. You can have more."

Unfortunately, this wasn't the first time I heard those words: either to myself or secondhand from another grieving mom.

While I believe there were good intentions behind the remark, I still have something I want to say, and essentially it all sums up to this: children are not replaceable.

I cannot count the number of times I have heard a story from another grieving mom where someone told her, "You can still have another" as advice to get through their child's death.

It's something said with good intentions, but let's be totally honest now: it's ignorant. Honestly though, it's a thought that may have crossed my mind a year ago if I were giving a grieving parent advice.

The change in my perspective occurred sometime after realizing I might lose my son and sometime before I held him as the breath left his lungs. 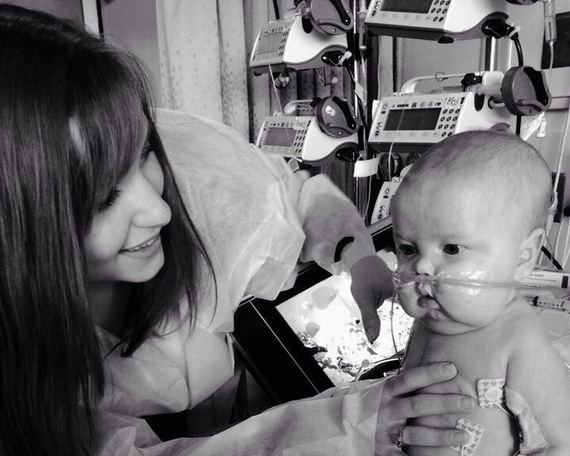 This is the boy that I loved as soon as I saw two pink lines appear on a pregnancy test early one hot July morning. I sat nervously as my husband and baby were sleeping, and as the lines appeared, so did a little spark of love and at that moment, a deep, unbreakable bond was created between a mother and her child.

This is the boy that was placed in my arms and then taken right away, and for the first time, I realized that the universal, unspoken fear of every parent could become my reality.

This is the boy that grew and healed with a strength that could not be rivaled.

This is the boy that searched for my voice across the room and whose face lit up at the site of his momma, the one who knew him like the back of her hand.

The boy who fit perfectly in my arms, with his face nestled into my neck.

This is my boy.

The one I have cried a million tears for, and I will cry millions more until we are reunited.

And I say this to all of you... Each child is special. We love them uniquely. If we were blessed with enough time with our children, we get to know their personalities, their quirks, their sweet side. We get to know their favorite things to do -- whether it's how they like to be held or what their favorite foods are. We learn them and we love them, and a place grows in our hearts that is exclusively meant for them, and when they leave our arms, that place still stays, and it aches.

Trust me, it aches.

And maybe over time the ache lessens, but it is still always there, and it sits with an emptiness with the lack of their presence, a longing to hold them tight, and a hope for the day when we will be together again. Maybe over time, the ache quiets, but that place in our hearts that was made for them, it stays forever. Our children are irreplaceable.

They are forever irreplaceable.

Writer and Founder of On Coming Alive